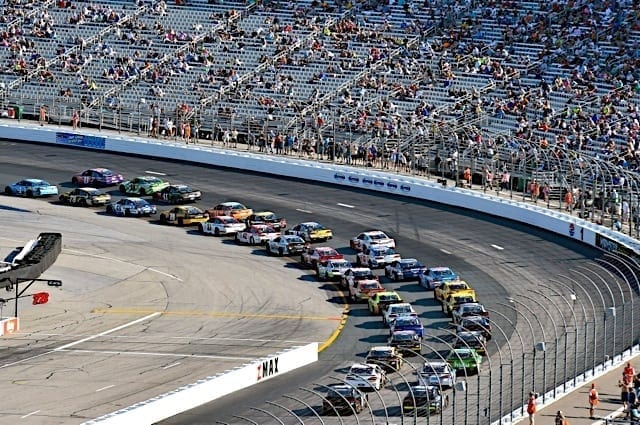 New Hampshire Motor Speedway confirmed this week that the track will once again apply the same PJ1 compound used in the July event. The compound, being applied to the first and third grooves of the racetrack, was a much-hyped edition to the one-lane racetrack at which cars can be very tough to pass.

In theory, the sticky substance is supposed to make multiple artificial racing lanes to produce side-by-side racing. That’s why the middle of the turns aren’t getting the substance; with an even playing field, drivers would simply run the bottom as they do now. In practice, it was a success; although eventually the compound wore out, there was still some great three-wide racing at a track not really known for it. The outside was the line to be in on restarts, with the inside not really being able to do much.

“I think it’s awesome,” Kyle Larson said in the track’s PR statement announcing the decision. “I was surprised at how well it worked. I liked the element of it changing quickly and wearing out and then wearing out in different spots and stuff.”

Larson wasn’t the lone driver in favor of the compound. Other drivers such as Austin Dillon, Kevin Harvick and Kyle Busch also voiced their support for it.

How Memorable Will the Final Fall New Hampshire Race Be?

This weekend will be a very important race for the speedway. It will be the final fall race weekend at New Hampshire, with both the Monster Energy NASCAR Cup and Camping World Truck series moving to a sister track in the Speedway Motorsport Inc. family, Las Vegas Motor Speedway. Before being home to New Hampshire in 1997, this date had been at North Wilkesboro Speedway since 1949.

But Bruton Smith and then-track owner Bob Bahre had other ideas, splitting cost on the small North Carolina short track before shutting it down and cutting the track’s two dates between them. Smith took the spring race to his brand new, state-of-the-art 1.5-mile Texas Motor Speedway, while Bahre took the fall race to New Hampshire.

Bahre sold the Loudon, N.H., track to Smith in 2008, and the track was able to weather a bad economy for years before finally Smith’s desires for a second race weekend at Las Vegas left the 1.058-mile track on the chopping block for 2018. The July race will be the lone NASCAR national series weekend at New Hampshire for the foreseeable future.

Strangely, despite replacing one of the original eight races in the NASCAR Cup Series, Loudon is a bit of a throwback itself. Many permanent racetracks built before the 1950s were flat, one-groove race tracks like New Hampshire is. Some of the more well-known examples of these include Martinsville Speedway and the Milwaukee Mile. For some drivers today, racetracks like Loudon were where they first cut their teeth in series such as the NASCAR Whelen Modified Series.

Will a Joe Gibbs Racing Toyota Get Its First Playoffs Win of the Season?

Joe Gibbs Racing won its first race of the season at New Hampshire in the July race, opening the door for the Toyota team to win three of the eight races since.

All three of the organization’s playoffs drivers should be favorites this weekend. Kyle Busch can’t be too happy after a terrible pit road penalty by his crew relegated him to 15th last weekend in Chicagoland Speedway; he’ll be looking to regain his pre-playoffs momentum at a track he’s won at twice in his Cup career.

Denny Hamlin has 10 top fives in the last 13 Cup races this season, including four straight heading into this weekend. Loudon is one of Hamlin’s best racetracks, having won three races in his career at a track that’s similar to Martinsville, one of Hamlin’s home racetracks.

Finally, Matt Kenseth‘s last Cup win to date was at last year’s July race at Loudon, one of three won at the Magic Mile by the former Cup champion since joining Joe Gibbs Racing in 2013. In that same timeframe of nine races, Kenseth has only finished outside of the top 10 once.

Even rookie Daniel Suarez should be in for a good weekend. One of Suarez’s best results this season was a sixth in his first New Hampshire Cup start last July.

Their biggest competition this weekend will be championship favorite and fellow Toyota driver Martin Truex Jr., who started on the pole and led 137 laps in July before having to settle for third. A scary part of Truex’s game is that he’s already in the next round of the playoffs through winning at Chicagoland last weekend. He has been hard enough to beat this season, but a Truex with nothing to lose and everything to gain through even more playoff points will be one to watch for every weekend this fall.

Who Will Win the Opening Round of the XFINITY Playoffs?

A full field of 40 NASCAR XFINITY Series drivers will start the race on Saturday night at Kentucky Speedway, the final standalone event of the season and also the final fall race at Kentucky.

The favorite this weekend may just be Elliott Sadler, the regular season champion and defending race winner. Sadler hasn’t won a race all season, but his consistency throughout the season has allowed him to start the playoffs as the No. 3 seed. Sadler has momentum, entering this weekend with a two straight top-five finishes.

Another to watch is Justin Allgaier, whose two wins this season have come in races with less big name Cup drivers in the field. He seems to just turn it up a notch whenever he doesn’t have to race as many of the Cup guys. That said, Kentucky hasn’t been as successful for Allgaier as it has been for other drivers noted here. The Illinois driver’s best finishes at the 1.5-mile speedway have been just two fifths, with the last coming in 2012.

Although there are no Cup drivers in this race at all, that doesn’t mean it’s just XFINITY regulars in the race. Sam Hornish Jr. will start the race with the best chance of winning the race among those who don’t race full-time in the series. Hornish will pilot the No. 22 Ford as he did when he won earlier this season at Mid-Ohio Sports Car Course, and his stat line looks favorable for this weekend; in six starts at Kentucky in XFINITY competition, Hornish has three top-fiive finishes and five top 10s.

Finally, this season William Byron will be out for vengeance after a heartbreaking loss in the NASCAR Camping World Truck Series playoffs last year. Byron dominated the season, but an engine failure in the penultimate race knocked the young driver out of the final four at Homestead-Miami Speedway, a race Byron ended up winning. Now that playoff points are a thing, Byron’s 17-point cushion should be able to prevent one instance of terrible luck getting in the way of contending for another championship.

Fond memories of the FALL race. Staying at a cabin on a lake, cool, cool nights. Campfires, etc. Good times!