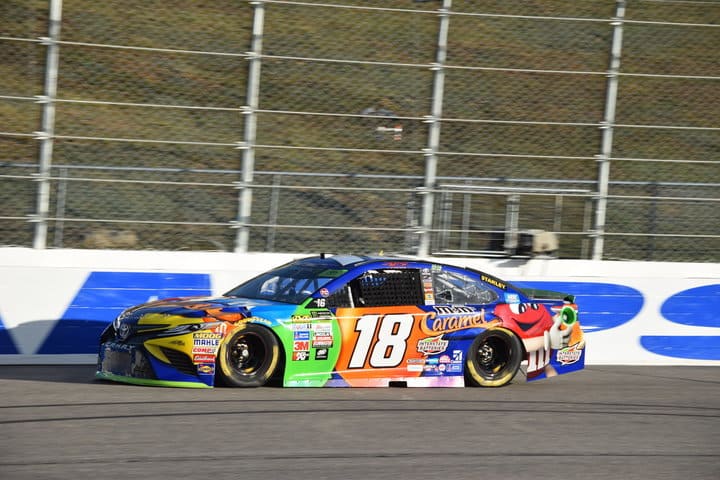 On Friday afternoon, Kyle Busch turned in a lap of 28.203 seconds (135.049 mph) on his first circuit of the 1.058-mile New Hampshire Motor Speedway.  Attempting to improve on the second lap resulted in the No. 18 slowing down.  Regardless, his first lap of the session held up to give Busch the pole for Sunday’s ISM Connect 300.  It is his eighth pole of 2017, tops among all drivers.

Afterwards, Kyle Busch was matter of fact when asked what it took to earn the pole.

“Same as it is any other time.  Got to have a fast car,” Busch said.  “Certainly feels good to be able to capitalize on another good Friday.  Just need to somehow figure out how to turn these things into good Sundays.”

Starting alongside Kyle Busch will be Kyle Larson, who was fastest in practice earlier in the day.  Larson’s lap was just three-hundredths of a second off of Kyle Busch.  Denny Hamlin will start third, followed by Ryan Blaney and Martin Truex Jr.

Kevin Harvick will start sixth on Sunday, followed by Kurt Busch.  Erik Jones will start the highest of the non-playoff contenders in eighth, while Kasey Kahne and Matt Kenseth round out the top 10.

For Jimmie Johnson and Chase Elliott, qualifying was more of a rush job than anything.  When the session began, Johnson was still going through the template inspection in the garage.  Despite that, Johnson was able to get into the final round and will start 12th.  Elliott will start 14th.

The only driver who failed to turn in a lap during the session was Team Penske’s Joey Logano.  When the first round of qualifying ended, this was the scene in Logano’s garage:

22-@joeylogano failed to turn in a lap during the session. He’ll start 39th. pic.twitter.com/5RakkWusSj

At the time, there were various blocks of ballast on the ground in the garage as the team worked on Logano’s car.  Despite having to start last, Logano appears to have the right attitude.

Monster Energy NASCAR Cup Series teams have two practice sessions on Saturday that will help them prepare for the race.  The first is scheduled for 9 a.m. Saturday morning.  It will air live on CNBC.

13 of the first 14 are chosen ones. Not too obvious how the event will go.