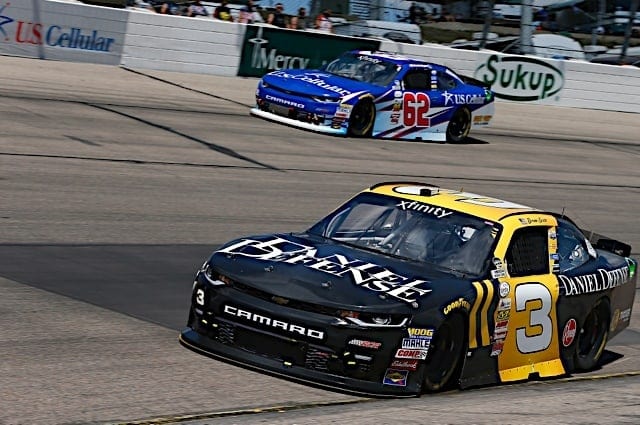 Time’s sure flown by when it comes to the 2017 NASCAR season, and it’s possible that’s no more prevalent anywhere else than in the XFINITY Series, which runs its final standalone race of the year this weekend.

The series travels to Kentucky Speedway for a night race Saturday, Sept. 23, its last event of 2017 in which the Monster Energy NASCAR Cup Series will run at a separate track. Now, in years past, this would have meant a little more, as there were lesser limitations on Cup drivers running in lower NASCAR series, meaning that the last standalone race of the season would mean that it was, definitively, the final chance for a non-Cup driver to DEFINITELY win the race all year. Things have, of course, changed for 2017, with limitations in place for drivers who have run more than five seasons on the Cup level once the lower series’ playoffs begin.

Those rules crunch Cup drivers’ participation even further in 2018, but more on that next year. It’s confusing enough to keep the differences between 2016, 2017 and 2018 in mind.

Even still, there remains a certain allure to Kentucky this weekend. It’s the final race of the season where you’re altogether certain you won’t see at least a Dillon or a Larson or a Blaney. Teams like the No. 3 for Richard Childress Racing or the No. 22 for Team Penske will have someone a little unexpected in the seat. At the end of the day, it’ll be no-holds-barred racing among drivers of similar skill levels, some of whom are running for a championship.

The entry list — 40 strong as of Thursday evening, Sept. 21 — has six drivers who have already won a race in 2017. Four of them are championship contenders — William Byron, Jeremy Clements, Justin Allgaier and Ryan Reed — while Ryan Preece and Sam Hornish Jr. have scored victories in their two- and three-race campaigns thus far, respectively. That’s over an eighth of the field that already has a win in 2017.

But can we add to that number? Well, it’s a definite maybe. And here’s who could do it.

Because, like, why not? Elliott Sadler is the regular season champion and sits merely five points behind Byron entering Kentucky. He’s the only driver in the series to get double digits in top fives so far this year and will likely be the first with 20 (he’s at 19 right now). Sadler’s been strong all year, just like the vast majority of JR Motorsports, which currently ranks in each of the top three spots in the standings. One has to imagine Sadler and co. have had this race circled on the calendar for a few weeks now, and with a win, five top fives and eight top 10s to his credit in the series at Kentucky, he’s got the past results, too. To boot, that win came in this exact race one year ago.

OK, but picture this: Cup driver with middling results retires before he’s 30, only to return the following season for an extremely limited affair in the series below it but with actually decent equipment again, snags a win to get his mojo back. Maybe it’s not the most shocking story in the world, but Brian Scott’s return from retirement to drive Richard Childress Racing’s No. 3 for a pair of races, partnering him back up with his old XFINITY team, was still fairly unexpected, and if his first race of the season was any indication, he has to be part of the conversation for a win Saturday. After all, his one other start this season resulted in a third-place finish at Iowa Speedway, and he wasn’t too far off the lead.

Consider this: in three starts at Kentucky across two different series, Tyler Reddick has finished in the top 10 each and every time, with a pair of top 10s in the Camping World Truck Series complementing his 10th-place run at the track in XFINITY earlier this year. But you know what could drive him into the top five this weekend, perhaps even a win? Earlier this week, Reddick was announced as a full-time driver for JR Motorsports in 2018, taking over for Byron. No more pressure to perform in a part-time run in the series, not knowing what 2018 had in store? That could be the key to victory.

The other entered former XFINITY Kentucky winner this weekend besides Sadler barely made it into the playoffs. But maybe that’s a good thing for Brendan Gaughan, who certainly has something to prove this weekend in terms of showing he belongs among the 12 championship-eligible drivers at all in a season that’s been subpar by his usual standards. Why not take full advantage of a second chance at a track he won at in 2014 and has four top fives and eight top 10s?

Four top fives and 13 top 10s in 2017 but no wins — it’s Cole Custer’s time to deliver. And though he’s yet to finish inside the top 10 in two starts at the track in the XFINITY Series, it seems like there’s something there, with an average start of eighth in those starts. Custer’s risen to the occasion in the Truck Series before, and with Kentucky being his final chance at a win with a Cup-less entry list, it could be all the push he needs to really get up toward the front and battle for his first win under the lights.