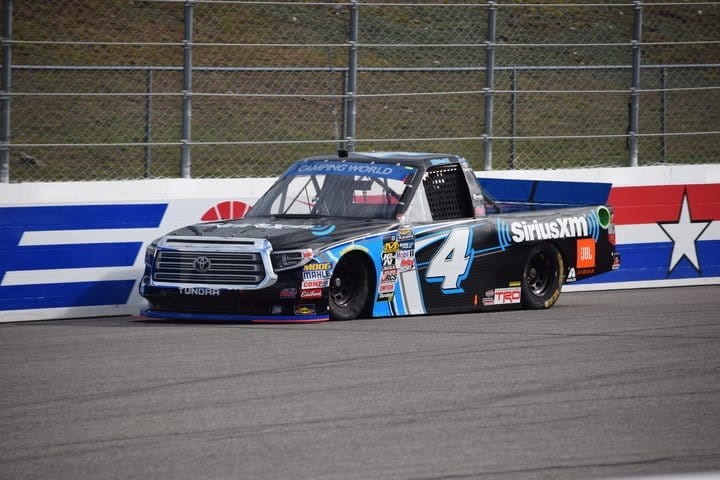 The Camping World Truck series opened their playoffs on Saturday afternoon,  where Christopher Bell led 73 of the 175 laps and won the first two stages at New Hampshire Motor Speedway.  Despite his success, Bell still had to work and work and work in order to regain the lead.  With 16 laps to go, Ryan Truex slipped exiting turn 2, which allowed Bell to get a run and sweep past.  From there, Bell held on to take his fifth win of the 2017 season.

Afterwards, Bell stated that it was the air that made it so difficult to get past Truex.

“The reason I couldn’t just drive by was because of the air,” Bell said during the post-race press conference.  “It ultimately took a mistake by [Truex]…to give me a lane up top to keep air on my nose.  I could maintain behind him, but I could never get a run on exit.  I kept showing him the nose, and [Truex] kept migrating lower and lower, trying to pinch me.”

With the victory, Bell has locked himself into the second round of the Camping World Truck Series playoffs.  He also now has 47 playoff points, 23 more than anyone else.

Early on, Bell was not fighting Truex for the lead.  Instead, he was battling with teammate Noah Gragson, who started from the pole.  Gragson led the first 24 laps with Bell right on his tailgate.  The teammates raced side-by-side for multiple laps before Bell briefly slipped by.  Gragson was able to get back by, but Bell was able to get back into the lead on lap 42 and held on to win the first stage.

Gragson’s chances of victory came to an end very early in the second stage when he washed up the track in turn 4 and hit Kaz Grala.  Gragson then spun into the right side of Johnny Sauter, damaging his left front fender.

The No. 18 crew made repairs to the Switch Toyota, but the incident took him out of contention.  Gragson would finish a lap down in 15th.  As for Sauter, he continued and did not stop for repairs.  However, he did lose his tailpipes shortly afterwards, which caused another yellow.

Matt Crafton used pit strategy to get himself up front.  Putting on two tires during the first caution moved him up into the lead.  Crafton was able to hold it until the restart from the tailpipe caution, when Bell charged back past.  From there, Bell pulled away and won stage No. 2.

Trouble struck for Austin Cindric shortly after the start of the final stage when he spun out in turn 4 to bring out the final caution.  Cindric’s No. 19 was undamaged and would continue.  He eventually finished eighth.

It was here that Truex came into his own.  Restarting third, Truex was able to get past Bell and Ben Rhodes to take the lead and open up a small gap on the field before Bell ran him down.

After Bell was able to get past, Truex, driving the oldest truck in the HRE Motorsports stable (Chassis No. 1), held on to finish second.  It is his best career finish in the Camping World Truck Series.  Todd Gilliland recovered from a tire rub to finish third, followed by Grant Enfinger and Stewart Friesen.

For Friesen, Saturday marked the first race of a new relationship between Halmar Friesen Racing and GMS Racing.  The team raced this weekend out of a GMS Racing hauler and the team is now based out of GMS Racing’s shop.  The results so far are very encouraging.  Saturday marked Friesen’s first top 10 finish in the Camping World Truck Series on pavement.

Even if Bell were unable to get past Truex for the win, he would have still made big gains in the points.  Bell scored 15 points more than the next best playoff contender.  That was Crafton, who finished sixth.  Rhodes was seventh, followed by Cindric and Sauter.  Grala rounded out the top 10.

The only playoff contender to run into serious trouble on Saturday was John Hunter Nemechek.  Nemechek started experiencing a vibration early on, which forced him to pit on lap 32 for two tires.  Unfortunately, that change did not cure the vibration.  Eventually, Nemechek went behind the wall for repairs.  He would eventually return to the race, finishing 36 laps down in 20th.  The incident drops Nemechek to eighth in points, seven behind Grala in sixth.

Next weekend, the Camping World Truck Series travels to Las Vegas for what is currently a standalone weekend.  However, next year, this will be a tripleheader weekend that opens the playoffs.  The green is scheduled for 8:45 p.m. Saturday night.