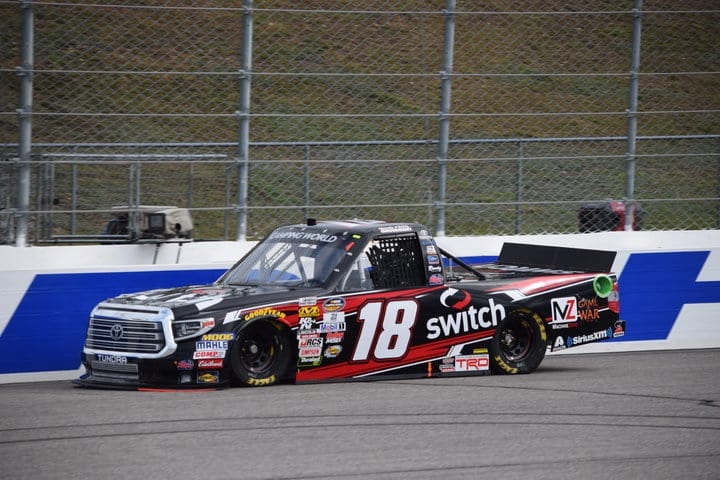 On Saturday morning, Kyle Busch Motorsports’ Noah Gragson won the pole for the UNOH 175 at New Hampshire Motor Speedway.  Gragson’s lap of 28.896 seconds (131.811 mph) was a mere nine-thousandths of a second faster than teammate Christopher Bell, fastest of the playoff contenders.

Johnny Sauter will start third in his ISM Connect Chevrolet, followed by Ben Rhodes, who was fastest overall in round No. 2.  Todd Gilliland will round out the top five.

Austin Cindric qualified sixth, followed by Ryan Truex and Grant Enfinger.  Chase Briscoe and Matt Crafton round out the top 10.

The only playoff contenders that will start outside of the top 10 are Kaz Grala and John Hunter Nemechek.  Grala qualified for the third round, but effectively used up his tires getting there.  He’ll start 12th alongside of Stewart Friesen.  Nemechek has struggled for pace much of the weekend and will start in 14th.

Cody Coughlin was 15th quickest in the second round, but cut a right rear tire.  NASCAR granted the team a tire change, but Coughlin did not go back out.  He will start in 23rd.  Jordan Anderson‘s lap in the second round was disallowed due to unapproved adjustments.  He’ll be credited with a 24th-place starting spot.

The UNOH 175 is scheduled to go green shortly after 1 p.m.  Saturday afternoon.  TV coverage starts with NCWTS Setup at 12:30 p.m. on FOX Sports 1 with race coverage following at 1 p.m.