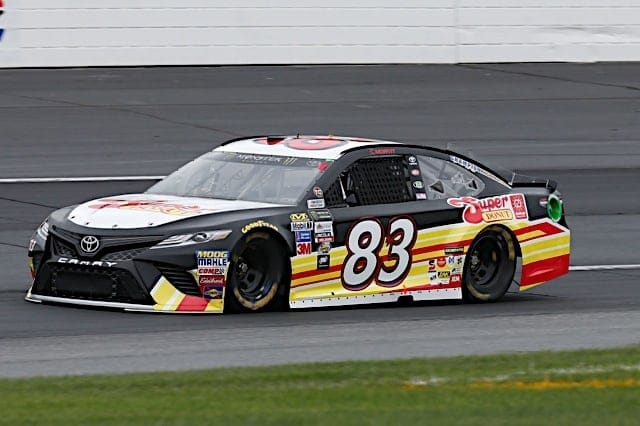 As of mid-May, Brett Moffitt was content competing in the Camping World Truck Series with Red Horse Racing. But then, the long-time organization closed it’s doors, leaving the Iowa native without a ride.

Moffitt, 25, went home to Iowa to compete in just his second career XFINITY Series race in July, finishing 11th with GMS Racing. After that, crickets.

In August, BK Racing announced it had signed Moffitt to compete at Watkins Glen International, where he placed 32nd in the BK Racing machine. The following week at Michigan International Speedway, another 32nd, while returning a month later at Chicagoland Speedway to finish 37th.

Ron Devine, owner of BK Racing and Moffitt have come to an agreement and plan on finishing 2017 together.

“Yeah, that’s the plan as of now as far as I know,” Moffitt told Frontstretch regarding his status. “We’re going to keep going at it and we’ll see. It’s good. It keeps me kind of relevant. It gets me to the track and stay in front of people. That’s the best part of it.”

Devine added that Moffitt brings the best out of his race team, and he’s a good shoe.

As everyone knows, NASCAR is a sponsorship-driven entity, and if someone comes along with some money, Moffitt may need to look elsewhere.

“We love Brett, he’s great,” Devine added. “He’s a great driver and we think we can get him sponsored and that’s what we’re trying to do. He’s working on it. We’re working on it and we’re happy to have him a part of our organization. There are a couple of other drivers who have some sponsors that may boot him for a few races here and there, but if that doesn’t come together we’re going to try and run Brett.”

In a trio of races for BK Racing, Moffitt was the highest finishing team car at WGI, but finished only one position behind Corey LaJoie at Michigan and Chicago. The former Michael Waltrip Racing driver had some adjusting to do coming to this race team mid-season, but has done so in the past with Red Horse Racing and Front Row Motorsports in the Cup Series.

“I’m kind of used to it,” Moffitt said of jumping to one team during the season. “You definitely go through growing pains, but you’ve got to try and make them as quick as possible and get to know each other and try to make the most of the short time you have together.

“They are in a position where they don’t have much of a constant driver, either. They are used to having that and I’m used to being in that position. It worked out well.”

Not having a constant ride and not knowing future plans can weight on a driver. Moffitt is no different.

The former MWR developmental driver, who was working beneath Mark Martin, Brian Vickers and Clint Bowyer had a three-year deal with the team when it shut down, with “multiple option years” proceeding the end date. Since then, his career has fluctuated between the Truck Series and the Cup Series, only competing in six races period in 2016, a year after winning Rookie of the Year in Cup.

Because of that, Moffitt’s passion has remained the same — getting in a position to win.

“I need to remind myself of that sometimes,” Moffitt said if racing is his passion. “When you’re not competing for race wins – my passion is winning, not necessarily racing. I’m just a competitive person and like to win at everything I do. When you’re not racing for wins, it gets tough. That’s probably the best part about the Red Horse deal is it reminded me of what it’s like to win races and be competitive and why I loved racing.

“At the end of the day is I need to get back into being in that position. If I just started racing for a living, I’d probably quit and move back to Iowa because it’s just not what I like to do.”