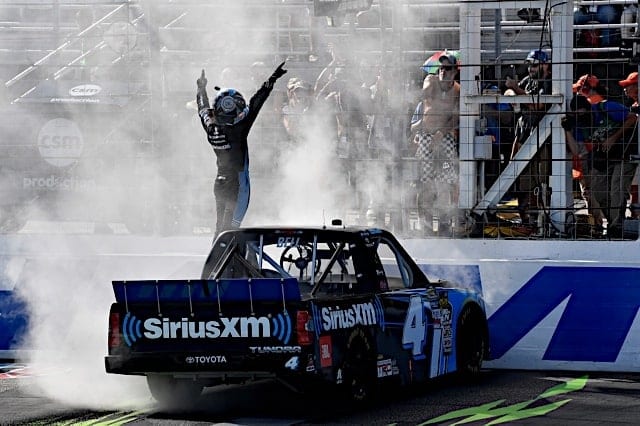 After narrowly missing out on the pole at New Hampshire Motor Speedway on Saturday morning, it didn’t take Christopher Bell long to prove he had the truck to beat in the UNOH 175.

Bell took the lead from Kyle Busch Motorsports teammate Noah Gragson shortly after lap 40, en route to winning an uneventful opening stage. Stage 2 was much of the same, as the No. 4 truck took the checkered flag.

However, Ryan Truex played a bit of strategy in the third stage to get ahead of Bell as the No. 4 team restarted in sixth. Bell made short work of four of the five drivers ahead of him, but couldn’t find away around the No. 16 truck until 15 laps to go. There was no looking back from that point on.

“He [Truex]was doing a really good job of watching his mirror,” Bell said of getting by Truex. “I knew it was tough to pass all day, but our truck had been so good we hadn’t been able to do it until we got to him. I kept trying to work down and he kept blocking my air down and down and down. Finally, I got one run where I drove up in [Turn Nos.] 1 and 2 and then got a big run into [Turn] 3.”

Bell has clinched a spot into the round of 6, which begins at Martinsville Speedway in late October. It’s the fifth win of 2017 for the Oklahoma native, and KBM’s eighth victory of the season.

In a Nutshell: Christopher Bell had the best truck by far in Saturday’s Camping World Truck Series event at the Magic Mile but needed to overcome a variety of strategies to secure the checkered flag. The 22-year-old caught Ryan Truex with over 40 laps to go, but could not get past the No. 16 until he drove it deep into Turn 3. Truex tried the proverbial crossover move, but to no success. The No. 4 team was the only truck in the field that could come into pit, take four tires, and let the race play itself out. That’s going to be tough to beat over the final six races of 2017.

Who Should have Won:

Noah Gragson won his third pole of his rookie campaign at New Hampshire, and when the race started, he was one of the guys to beat.

After missing the playoffs, Gragson had little to lose and was determined to run up front. The No. 18 truck paced the field for the opening 40 circuits, having an epic battle with Bell for the lead. He finished third in the opening stage.

Stage 2 was the downfall of Gragson after getting involved in a crash with Kaz Grala and Johnny Sauter on lap 63. The No. 18 team repaired the front clip as best it could, but a bunch of speed was lost out of the truck.

“I just messed up,” Gragson said after a 15th-place finish. “We were pretty good, but I need to learn from my mistakes. I drove it down on the bottom, and I didn’t run on the bottom all race and getting out of the VHT and getting into the middle groove. I was sliding, and by that time, Kaz [Grala] in the [No.] 33 was coming down and setting himself up for the exit and just tagged me.”

The No. 18 team fought and battled to remain on the lead lap, but ultimately finished the second car, one lap down.

If you’re a dirt track fan in the northeast, you’ve heard of the name Stewart Friesen. Winning race-after-race with relative ease is what propelled the 34-year-old rookie to NASCAR.

Sure, Friesen picked up a runner-up finish and led 93 laps at Eldora in July, but the visit to New Hampshire playend dividends after recently undergoing an alliance with GMS Racing.

The No. 52 truck began the race in 11th, Friesen’s best qualifying effort outside his pole-winning run at Eldora. But once the race began, he charged to the top 10, and remained there for the majority of the 175-lap race.

Friesen finished the opening stage in 10th, earning a single stage point. During the second stage, he began to charge upward on the scoring pylon, finishing sixth. Missing an incident involving Kaz Grala and Austin Cindric and he was able to leap into the top five, where he finished fifth.

“We turned everything around with GMS so fast to get us up to speed,” Friesen said of his fifth-place effort. “That was a lot of fun. What a racecar. The guys made good adjustments all day, and I’m so, so happy to be here. It’s something that I never thought I would get the opportunity to be here and even compete at this level. To get a top five, it’s pretty darn cool.

This marks the second top-five finish of 2017 for Friesen, though finishing in the top 13 in five out of his past six events. Aligning with GMS Racing, which has a pair of teammates in the playoffs, can only benefit the veteran dirt racer.

“I could feel the difference the first lap out at 70 percent,” Friesen said. “We were top 10 in times, and it’s good. These guys have their shit together, that’s for sure.”

Friesen heads out west next weekend to tackle Las Vegas Motor Speedway. In five mile-and-a-half races this season, the No. 52 truck has a best finish of 12th at Kentucky Speedway in July.

2017 Rookie of the Year Candidates

Number of rookies in the race: Nine (9)

Number of rookies in the top 10: Four (4); Grant Enfinger was best in class finishing fourth, though Stewart Friesen was close behind in fifth. Austin Cindric rebounded from a mid-race spin to finish eighth, while Kaz Grala rounded out the top 10.

Rookie of the race: Grant Enfinger

Up Next: The Camping World Truck Series heads west for it’s final stand alone event at Las Vegas Motor Speedway. Tyler Reddick is the defending winner of the event, leading 37 laps. The green flag is set to fly shortly after 8:30 p.m. ET next Saturday, Sept. 30.