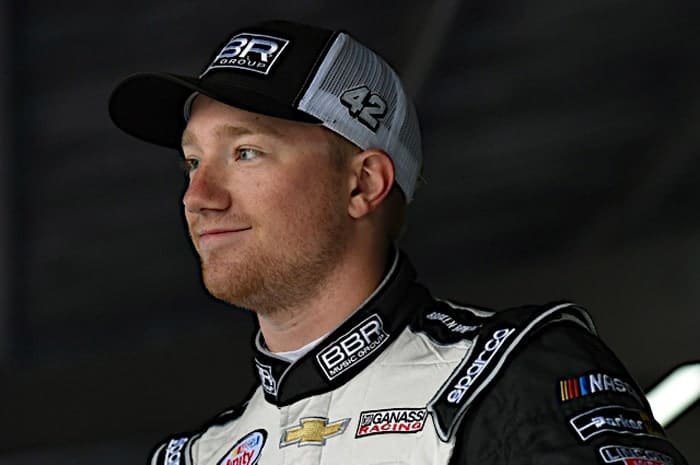 The battle seemed to be between Cole Custer and Tyler Reddick all night but in the end Reddick sealed the deal and claimed his first career victory in Kentucky. Reddick took the lead back on 161 and he never looked back.

Kyle Benjamin and Ryan Preece led the field to green with Benjamin breaking away with the lead. Custer passed the No. 18 with five laps remaining in the stage and would never look back earning the victory in stage one.

Justin Allgaier had a tire go flat early in the stage, fell two laps down and failed to tally stage points in the first stage.

Benjamin took a gamble during pit stops, taking only two tires while the rest took four. Benjamin restarted on the inside with the lead alongside Custer who was second in the race off pit road. The two tire experiment failed for Benjamin who fell back fast. Custer took advantage and the lead.

Brandon Jones and Sam Hornish Jr. made contact in the center of turns one and two. Hornish Jr. smacked the outside wall and pitted for repairs. No caution was displayed for the incident.

The caution would be displayed on lap 75 after Angela Ruch spun coming off of turn four. It didn’t hinder Custer’s lead but gave the opportunity for drivers like Kyle Benjamin, Ryan Preece, Elliott Sadler, Ryan Reed, along with a few others.

Custer would set sail on the restart earning his second stage victory of the night.

Elliott Sadler and Ryan Preece led the final restart of the race with Sadler taking the lead and working further and further away from second place Preece. Preece set his sights on the No. 1 and eventually made the pass on lap 104. It was looking like another Cinderella story for Preece until Reddick took the lead and set sail ultimately earning the No. 42 it’s fourth win of the season.