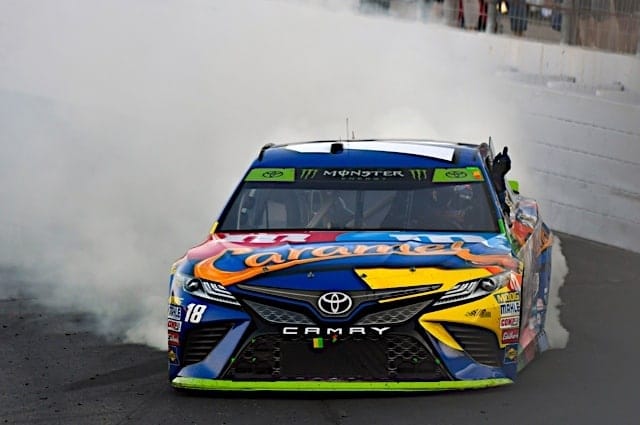 Kyle Busch may have dominated Sunday’s ISM Connect 300 at New Hampshire Motor Speedway, but he needed a little luck to get it done, too.

After a track-blocking crash that swallowed up leader Martin Truex Jr. and others on lap 150, Busch tip-toed through the melee for grab the race lead.

“That was pretty intense,” Busch said. “That was some Days of Thunder stuff over there.”

From then on, the pole-sitter led the rest of the green-flag laps, tallying 187 of 300 laps on the day toward a third victory of 2017 in the Monster Energy NASCAR Cup Series.

“A great day for this team,” he said. “This thing was awesome, we ran up front all day, executed and did what we were supposed to do.”

Kyle Larson finished where he started… second. In what was a good day for the No. 42 team, it was the eighth second-place finish for Larson of 2017 and his third at New Hampshire.

“Finished second again, that’s a lot of second-place finishes,” Larson said. “I’m fine with second, top fives will get us to Homestead. Obviously, you want to win but second is also not bad.”

Though Busch led the most laps, Truex was on his way to another stage victory at the race’s halfway point, leading by a few seconds on the last lap of Stage 2. However, a spin by Kevin Harvick off Turn 2 threw a wall of smoke in front of the field, where Kurt Busch slammed into the stopped No. 4 and Truex spun into Dale Earnhardt Jr.

The minor damage put Truex back to 18th before he advanced back into the top five, finishing fifth after leading 112 laps.

“We just fought back,” Truex said. “We had an awesome racecar the first two stages. Sometimes things happen, a lot of smoke, hit by a lapped car and then got torn up trying to back up. We just fought like hell.”

“We’re going to need a win, we really do. We really need to win bad,” Kenseth said. “I’m a little let down we didn’t get it. We just need to be a little better.”

Multiple playoff drivers had issues Sunday, starting with Ricky Stenhouse Jr. who hit the wall for the second straight week in his No. 17 Ford. He rebounded to finish 15th, sitting in a tie for the 12th-place transfer spot with one race to go in Round 1.

Kasey Kahne, however, was unable to rebound from his issues, suffering a broken trackbar with 36 laps to go. He finished 35th and sits 21 points back of 12th heading to Dover International Speedway next weekend.

Welcome to the Round of 12. @KyleBusch is your winner today at @NHMS! #Rowdy18 #NASCARPlayoffs pic.twitter.com/YARjqtON9q