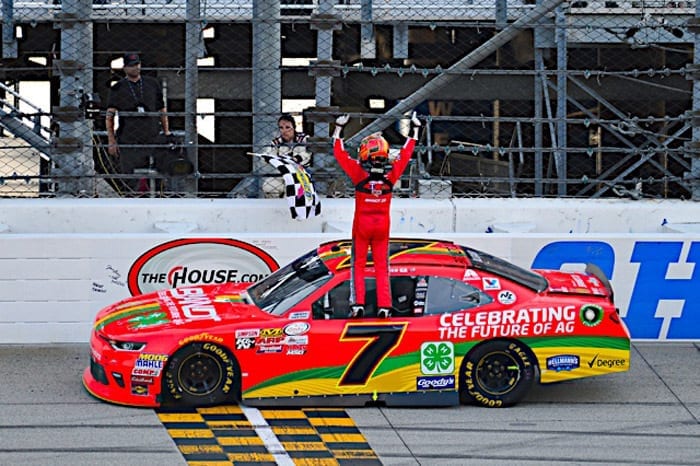 With two of three races complete in the Monster Energy NASCAR Cup Series’ Round of 16, we can easily place six drivers in the “stressed” category as the series heads to Dover International Speedway for the first elimination race of the playoffs.

Starting from the bottom, Kasey Kahne may have had a decent top-15 car in Sunday’s ISM Connect 300 at New Hampshire Motor Speedway, but one of those nasty gremlins broke the trackbar on the No. 5, bringing the Brickyard 400 winner to the garage with 36 laps to go.

A 35th-place finish further complicated his chances at advancing to the Round of 12 after entering Loudon  below the cutline. Now, he sits 21 points in the red.

One spot higher on the chart is Kurt Busch. Now, this guy may also have a big race win this year (Daytona 500 in February), but Loudon also had a blow to his championship hopes, as a pileup on lap 150 led him straight into the path of Stewart-Haas Racing teammate Kevin Harvick.

For Busch, a 37th-place DNF puts him 17 points back heading to Dover.

The rest of the stressful men have advancement more in their control. Ryan Newman finished 23rd last week at Chicagoland Speedway, and backed it up with a 13th-place result Sunday. Those results put him one point behind 12th.

If you thought the points couldn’t get closer, his Richard Childress Racing teammate Austin Dillon is tied with Ricky Stenhouse Jr. for the final transfer spot while Jamie McMurray is only a further nine points up the grid in 11th spot. – Zach Catanzareti

Being that it was the last XFINITY Series stand-alone event of 2017, it would be expected that the playoff drivers step up. It’s an opportunity to shine and not compete against the Cup guys. But it was a part-timer who was victorious.

Tyler Reddick made his 15th start of the season on Saturday evening at Kentucky Speedway, en route to a dominating performance, leading 66 of 200 laps, finishing runner-up to Cole Custer in the first two stages. The final stage is where the No. 42 car shined.

Haven't had a chance to check my notifications yet tonight, but I just want to say thank you to everyone who made this possible! It's unreal

Reddick outran Chip Ganassi Racing teammate and playoff contender Brennan Poole for the victory, the first of his career. Though competing in just over half the season, the rookie driver sits 18th in the championship standings, ahead of Spencer Gallagher and close behind Brandon Jones, both who have run the entire schedule.

If the California native proved anything, it’s that he deserves a full-time opportunity, which he will receive in 2018 with JR Motorsports. Ironically enough, Kentucky was his first race in the No. 42 machine since the announcement. A little motivation, perhaps?

Earning 52 points, Custer is now tied with Justin Allgaier for the championship lead. Two races remain until the playoff field dwindles to eight, and Brendan Gaughan, Blake Koch, Michael Annett and Jeremy Clements are on the outside looking in. – Dustin Albino

Camping World Truck Series: So Close, Yet So Far for Ryan Truex

For Ryan Truex and Hattori Racing Enterprises, Saturday’s UNOH 175 could have been really special.  Using their oldest chassis in the stable and a one-race deal from sponsorship from Price Chopper Supermarkets, Truex qualified seventh and kept himself in contention via daring moves.

On the final restart, Truex was able to snatch the lead away from Ben Rhodes and ended up in the fight of his life for the lead with Christopher Bell.  With no playoff positioning to worry about, Truex fought hard for the lead.

However, with 16 laps to go, Bell was able to get a great run exiting Turn 2 and slipped underneath Truex for the lead.  From there, Bell pulled away for his fifth win of the year.  Despite the defeat, Truex still walked out of New Hampshire Motor Speedway with a career-best second-place finish and was upbeat.

Locked in at Loudon! @CBellRacing advances to the next round of the #NASCARPlayoffs. pic.twitter.com/M8WZHRAHIZ

“We’re getting really close. Now we’re leading laps,” Truex said after the race Saturday.  “I knew when I got the lead and the No. 4 cleared the No. 27, I knew I was going to have to deal with him that whole run. He played it smart. He didn’t push it hard. He didn’t try to pass me. He waited until my tires started to give up, and I think he saved a little. So, he had a little bit in the bank. It’s nothing to hang our heads about, losing to him. He’s been the class of the field all year, and that truck and KBM is really just been strong. This is chassis No. 001 for Hattori Racing. This is its best finish by like 10 spots.”

As Truex was the last driver out of the playoffs at the cutoff, he could not gain any spots in the standings by virtue of his finish.  However, he is now 43 points ahead of Grant Enfinger in the point standings. – Phil Allaway

Normally, a sports car race run to FIA rules in the dry is a relatively staid affair.  Everyone more or less obeys the rules (unless they involve track limits) and the overall interruptions are kept to a minimum.

Sunday’s European Le Mans Series 4 Hours of Spa-Francochamps was not that race.  The four-hour event was slowed five times in total.  Two were safety car periods where the whole field bunched up.  One of the safety car periods occurred when Andrea Roda spun into the tires and rolled his Algarve Pro Racing No. 25.

In addition, there were three full course yellows that saw everyone putt around at 80 kilometers an hour.

A number of top contenders were forced to serve penalties as well.  AT Racing, who won in LMP3, got busted for the simple violation of not turning the engine off during refueling.  The penalty was a stop-and-go where the engine had to be turned off, then re-ignited.

Race director Eduardo Freitas called a drive-through penalty on the overall leading No. 40 GRAFF Racing ORECA 07 with three minutes remaining in the race.  The reasoning?  45 minutes earlier, the car had illegally passed the No. 27 SMP Racing Dallara LMP2 in the runoff at Les Combes.

Richard Bradley was forced to serve the drive-through at the beginning of the final lap of the race.  As a result, his lead over G-Drive Racing’s Ryo Hirakawa was reduced to almost nil.  Bradley was able to hold on to win…for now.  As of this writing, the No. 40 is under investigation for a potential pit violation.  If a ruling is made that changes the result of the race. – Phil Allaway

With two races down in the NHRA’s Countdown to the Championship, don’t count Don Schumacher Racing out the title fight just yet.

Just a week after the DSR cars were all but shut out of the money round in both Funny Car and Top Fuel in the Carolina Nationals, DSR put three of their four entries into the Funny Car semi-finals of Sunday’s 33rd annual Dodge NHRA Nationals at Maple Grove Raceway with Ron Capps taking down Courtney Force in the final round to score his series-best seventh win of the season and take back the points lead from Force’s teammate Robert Hight.

Capps bested Jim Campbell and fellow DSR teammates Tommy Johnson, Jr. and Matt Hagan to reach the finals against Force, who had advanced to the final round with victories over Bob Tasca III, Hight and DSR’s “Fast” Jack Beckman to face Capps for their third final-round matchup.

In the final, Capps started out with a starting line advantage but Force began to close in at the halfway point before falling short at the line, giving the win light to Capps with a 3.698-second run at 326.48 mph over Force’s 3.993 at 311.70, putting Force 0-4 on the season in the final round.
The victory was the 57th of Capps’ career and his first-ever at Maple Grove, and allowed him to re-gain the Funny Car points lead by just eight points with four races left in the six-race playoff.

Courtney Force held onto her third-place position in the standings, while Hagan and Beckman took over fourth and fifth, respectively.

After round wins over Wayne Newby, Tony Schumacher and Antron Brown, Force made it to the final round to face Torrence, who defeated Terry Haddock, Leah Pritchett and Dom Lagana.

Meeting in the final round for the first time in their careers, Torrence was first out of the starting gate and held the advantage until the engine on his Capco dragster let go and Force chased him down to win by a car-length at the line, running 3.756 seconds at 326.24 mph over Torrence’s 3.857, 258.76.

After four-straight final round appearances at Maple Grove, Force finally broke through with her first victory at the track and fifth of her NHRA career.

The NASCAR national touring series will most likely see some action under the new multi-million dollar LED lighting system at Martinsville Speedway. Saturday night saw the first race held under the lights at the historic track. The Valley Star 300, the most prestigious perimeter Late Model race in the country drew a crowd of over 20,000 who saw the half-mile, paper clip shaped track bathed in white light.

Without a full-time Truck ride, Timothy Peters was able to come back home and managed to survive the minefield that is the qualifying, heat race and feature event. Peters added his second grandfather clock from the race by wresting the lead away from recently crowned national champion Lee Pulliam just before the 25 to go break and leading from there to the end. Former national champ Peyton Sellers took the Clarence’s Steakhouse halfway bonus in his familiar No. 26 sporting the classic livery of Clarence’s that he’s raced for years. Pulliam beat Sellers to the line by inches to finish second in the race. – Mike Neff

The Valley Star 300 at Martinsville was an awesome race. The heat races started around 4:00 pm and the feature ended around midnight. The action on the track made the time pass quicker than the 3 or 4 hour cup races on Sundays. New lights were awesome and the racing was the best. Thanks to Mr Campbell and staff for a great event