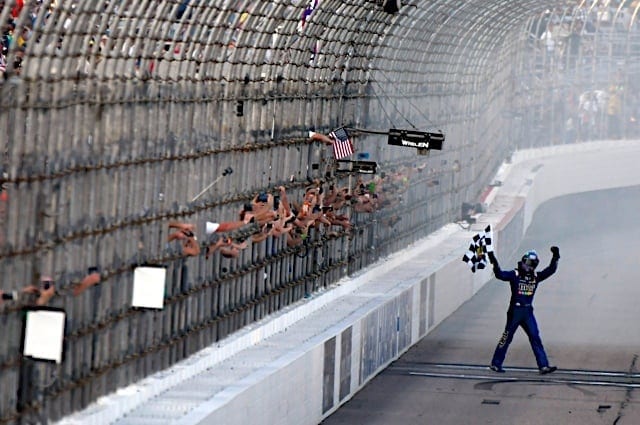 Who… gets the shoutout of the week?

It seemed like just another dominant race for Martin Truex Jr. He led 109 laps at New Hampshire Motor Speedway during the ISM Connect 300, winning stage 1 and taking the white flag for stage 2 in the lead. But instead of a smooth cruise to the stage win and hopefully Victory Lane later on, Truex instead rallied just to finish in the top 5.

On the exit of Turn 2, Austin Dillon made contact with Kevin Harvick. Harvick tried to get his Ford straight but couldn’t, covering the backstretch with smoke and coming to a stop in the middle of the racetrack.

Harvick teammate Kurt Busch drove straight into the fog of war and collided with Harvick. This set off a chain reaction crash that included Dale Earnhardt Jr., Denny Hamlin, Jeffrey Earnhardt and Truex. While backing away from the incident so that he could drove around Harvick, Truex made contact with Dale Earnhardt Jr. and sustained damage to his rear end.

Truex was able to continue and started the third stage in 18th. The New Jersey driver worked his way up to seventh until lap 265, when a call to take two tires on a pit stop under caution vaulted him right back to the lead. The No. 78 car had a terrible restart, but got lucky and had a second chance with a caution after less than one green flag lap. He ended up fifth at the finish.

This playoff point structure is working. Brad Keselowski and Kyle Larson have been two of the fastest drives on-track for much of this season, so two top 10s for both drivers to begin the playoffs should clinch them into the next round before the cut-off race at Dover International Speedway.

Under the 2016 system, however, they’d only have fairly a comfortable cushion. And it’s not unprecedented for said cushion to go away in just one race; just ask Keselowski about last season, when a blown engine at Talladega ended his championship hopes.

After being a bit bullish on this whole stage racing thing, it’s becoming clear to me that this system is going to be a great thing for this sport. Next week, stage 1 and stage 2 results could just be the turning point of who gets eliminated.

There’s a great chance that at least one or two drivers are going to lock themselves in through those results alone. It encourages fans to stay tuned rather than to watch football for three hours then tune to the race with five to go.

Now, the only hurdle in NASCAR’s way is to avoid the temptation of changing everything again. NASCAR’s ratings are lower than they have ever been in the last 20 years. But one little change isn’t going to suddenly cause an explosion of growth. Rather, it’s going to take having a solid foundation of a system that has been around for long enough to where everybody is familiar with it. Constantly changing how this sport conducts race or crowns its champion only turns fans off. Why learn a system when it’s going to be radically changed the year after?

Oh, and the race wasn’t that great, either. It was hard to pass, especially against the leader. Case in point: Larson led a single lap of the race, while Kyle Busch and Truex led the other 299.

Kyle Busch led 187 laps on his way to a dominating victory, after winning stage two and placing third in stage one.

Kevin Harvick struggled for much of the day to find any speed. He was running near the back of the lead lap before wrecking on the final lap of stage two. The defending race winner walked out of Loudon with a DNF in 36th.

Why… did Kyle Busch win?

After Truex got caught up in the Harvick wreck, Busch had a fairly easy path to victory. Truex was the only driver who took the lead after the crash, and that was only due to pit strategy. Truex had a faster long run car than Busch in the first two stages of the race, but that long run speed was neutralized following the wreck.

One scary part of Busch’s game is just how adaptable he is as a driver. He can and has won on flat tracks, short tracks, banked tracks, and road courses on the Cup Series calendar.

The only track he still hasn’t won at (Charlotte) is the most generic track on the circuit. The No. 18 team isn’t always on top of its game, but when it has been like over the last couple of months, they can win literally any week. That will do them well throughout these playoffs as Busch races for a second championship.

How… did the two front-running rookie drivers finish?

Daniel Suarez‘s strategy in every race seems to be to just stay on the lead lap the entire race before turning things up a notch and ending up with a top ten in the last second. This has worked multiple weekends this season, and Sunday it happened again; Suarez had an average running position of 14th before driving his way up to eighth by the checkered flag.

Erik Jones, on the other hand, has speed throughout the day. Jones ran in the top 10 all day and had a late restart where he challenged Busch for the lead before fading back to sixth.

With Ty Dillon being relegated to the background of this rookie class, the rookie of the year battle is heating up between the two Toyota drivers. Jones has the points advantage on Suarez, but the rookie of the year is determined on a bizarre system that includes a council of officials and the reigning Cup champion awarding points to the rookies following the season. Regardless, we’re going to see a great battle in the coming months.

When… will Kasey Kahne’s luck turn around?

Kasey Kahne was having an OK day before stopping in the middle of the track before pulling into pit road on lap 264. NASCAR threw the caution and penalized Kahne for intentionally calling the caution after he came down pit road to pit. But there seemed to be more to the story than that after Kahne pulled into the garage.

“Something broke,” Kahne said. “I think they said trackbar, but that is all I know. I didn’t talk to Darian [Grubb, crew chief]. But, that is what he had said while we were in the garage. We were working hard.”

Kahne finished the day in 35th after returning from the garage and is going to need a lot to make it to the round of 12 following Dover. He heads to the “Monster Mile” with a 21-point deficit to the cut-off line. He may just need to win his second race of the season to keep his championship hopes alive.

No stage racing will never be a “great thing for this sport”. Not ever! Heard from someone who was at the track today, they are not going back…they gave “stage racing” a try twice, hated it both time and they cannot stand the racing! They are done! Good luck with STAGE RACING. Most real fans of the sport hate it. Gimmicks are ruining the sport. And stage racing is a gimmick, to deny is a lie.

kb, I’ve been a real fan for 40 years, I’m starting to get the stage racing thing. Race within the race if you will. Things change\evolve whether we like it or not.

I guess the ‘heat’ races at the local tracks are gimmicks as well?… according to your “real fans” logic?

I’m thinking (and have heard others with same sentiment) the sports biggest issue is supply/demand. Cut the schedule to 25 races then races become more important and season ends before Football and World Series get started. The day’s of the singe sport die hard fan are over.

Thanks for you saying something without being condescending! But I cannot buy into this at all, it goes against what I have know since childhood. I don’t like it won’t like, can’t watch it. With a heavy heart I might add. My heavy heart which is still with me despite the change NASCAR tells us we must adapt to is stage racing, THE CHASE/THE PLAYOFFS, hot dog wrapper cautions, poor racing. Obvious favoritisms and selective punishment based on favoritism. I pray for a change, but I doubt it. I however cannot watch anymore and don’t, like many people I know. But I do pay attention to the shoot the foot moments NASCAR seems to do daily! God Bless!

stage race is a fancy word for competition caution. I can see it in lower series where cost is a factor, but these are the big boys.

Yes, I agree..and the fans in the stands DO NOT WANT a mandatory caution, nor do fans on the other side of the TV. RACE, RACE, RACE! The rhythm is broken. ETC. JUST ANOTEHR NASCAR MANIPUATION! And nobody will have me change my mind! NEVER! IT SUCKS! Could not stand the “cautions” when it rained the day before..WTF?

ArkyBass, I agree that supply and demand is an issue — too many races overall at this point but the biggest issue IMO is the fact that even with the stage racing (of which I am not a fan particularly but I don’t really care what they do at this point), the racing itself is simply not that interesting. For NASCAR to depend on stage racing and double file restarts for their excitement in the races doesn’t hold up in the long run. As far as heat races goes, maybe I am mistaken but if you don’t transfer up in the heat race, you don’t race the rest of it right? So it isn’t really the same thing as NASCAR is doing which just means that the stage races are for points & to juggle the line up a bit.

NASCAR avoids the issue which is the aerodependence of the cars don’t allow for passing and do everything else to try and make it exciting instead of fixing the mechanical issue.

BINGO! Well said! And to put that procedure at the CUP level after all these years is absurd. Different as night and day from other venues. Manipulation of NASCAR, like the phantom caution. Same thing different name. Lipstick on a pig.