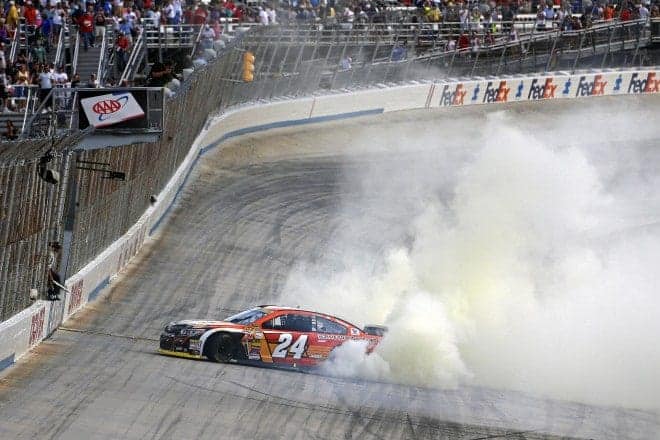 To race in Formula 1, drivers need to obtain an FIA ‘Super License,’ and NASCAR drivers can now qualify for one of these licenses for 2018.

F1’s governing body – the FIA – allocates points to drivers based on their performances in a number of series. To earn an F1 Super License, drivers need to earn 40 points over a three-year period of time, but only a few series previously qualified. Champions of IndyCar, Formula E, the World Endurance Championship and junior single-seater championships Formula 2 and European Formula 3 were the only series that could qualify a driver for F1.

Now, NASCAR can join the club.

The FIA World Motor Sport Council, which sets out rules and regulations for the FIA’s racing series, met in Paris Sept. 21, where several series including NASCAR Cup, Indy Lights and IMSA were added to the Super License system.

The winner of the MENCS championship gets 15 points toward the Super License, with 12 awarded to the ‘runner-up’ and 10 to whomever comes third in the overall points table. Points are only given to the top eight points finishers in NASCAR Cup, while all 10 finishers in major single-seater series such as IndyCar or F2 get license points.

The top five in NASCAR National series – the XFINITY Series and the Camping World Truck Series – also receive points towards a Super License.

Unfortunately, for this current crop of NASCAR Cup drivers, the points don’t take into account the last few seasons. Counting Super License points begins in 2018 for NASCAR Cup drivers and those taking part in many other series.

But even if NASCAR Cup drivers were eligible for Super License points from 2013, none of them would be eligible for an F1 Super License. Coming closest would be Kevin Harvick under this current system, who would have notched 37 of the 40 points needed for a license from 2013-15, having topped the NASCAR points table in 2014.

From 2014-16, Harvick would have come closest out of any FIA points-scoring drivers once again, but he would only have tabulated 28 points on his way. Even then, Harvick would have had to join another series to get those necessary Super License points.

So what the FIA’s new rule change means for current NASCAR drivers is that, to become eligible for an F1 ride, you will have to win two championships and finish third in a span of three years. Not even two consecutive second-place finishes in the Cup Series paired with a championship will give you F1 eligibility. That driver, great as they might be, will have only gained 39 of the 40 necessary Super License points.

The FIA wants drivers to gain enough single-seater experience to drive in F1 – the weighting toward F2 makes that single-seater series much more of a ‘feeder’ to F1. Anybody who finishes in the top three of the F2 series, which Ferrari Academy driver Charles Leclerc is dominating at the moment, will qualify for a license.

The GP2 Series includes points from 2015, and now the top two finishes in that single-seater series will qualify for a license, while the IndyCar champion gets an automatic license eligibility, as before. Josef Newgarden could be eligible for an F1 drive if he was picked up by an F1 team.

Lance Stroll, the Canadian rookie who jumped straight from the European F3 series – as champion – to the Williams F1 team for 2017, would still be eligible for a Super License. Now that the F3 points allocation has been cut, other drivers are going to find it harder to follow suit. Formula E, the WEC, Formula V8 3.5, and Japan’s top single-seater series – Japanese Super Formula – have also had their points allocations cut, making it harder for winners of those series to join F1.

One of many caveats for any potential license holder is that 300 kilometres or 186 miles of testing experience in an F1 car is needed before a driver can appear. Super Licenses aren’t cheap by any means, either. The FIA charges a set cost per point that a driver has on their license; 2009 F1 champion Jenson Button reported that he paid a quarter of a million Euros, or $300,000 to renew his Super License.

The cost of entering F1 without a wealthy financial backer helping a driver out remains prohibitive. Though it’s exciting to see NASCAR’s top series gain eligibility for an F1 license, the FIA’s decision to include NASCAR is superficial.

Jeff Gordon remains the only NASCAR driver in recent memory to have come close to becoming an F1 driver. Gordon tested out Juan Pablo Montoya’s Williams BMW F1 car in 2003 at Indianapolis while Montoya took the wheel of the No. 24 Chevrolet Monte Carlo.

In 1999, three-time F1 champion Sir Jackie Stewart said that he would love to sign 1998 Cup champion Gordon. “He’s an attractive young man,”said Stewart. “He behaves very well, he presents himself, he presents the sport well. More than anything else, he’s a hell of a driver.

“I think, unfortunately, Jeff Gordon is making so much money now in his own little area that it would be difficult for him to see the logic in leaving that guaranteed marketplace and going into Formula 1.”

It seems less likely now than in 1999 that a current NASCAR driver will make the jump to F1. But Gordon’s small taste of an F1 car, which he called “the most incredible experience I’ve ever had in my life,” showed that while he was almost set to do so, F1’s high bar of entry will still prevent all but the extremely lucky, talented few from joining.

It would have been interesting to see Gordon in a top flite F1 team. And he could possibly have done very well. But I find it hard to imagine any of the young drivers coming into nascar even being interested. Or maybe its more accurate to say that those funding the careers of the new crop of nascar drivers being interested.

So Tony Stewart saying Danica has an option to go to Formula One isn’t accurate. He was probably unaware of the stupid requirements.
For the record, the few F1 drivers who tried NASCAR failed. They believe their PR people.

See, if Kyle Busch were allowed Xfinity points to count like pre-2011, we could all accept the fact that he is trying to accumulate enough points across 2-3 series in 3 years to go Formula 1 racing. EVERYBODY would be happy with this.

I’d be happy if he went to Indy cars. There would be a lot less cheating in the three series.