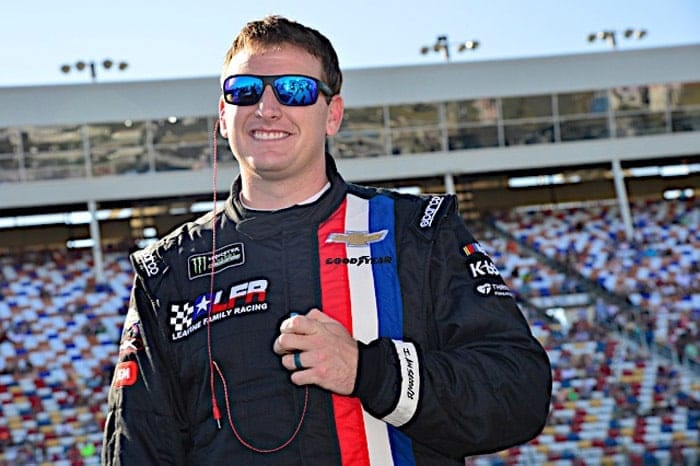 With the announcement Kasey Kahne will move to Leavine Family Racing in 2018, more Silly Season dominoes have begun to fall. At this point, we’ve heard from most of the bigger teams, but for the underdogs, it’s about to get interesting.

Michael McDowell, replaced by Kahne at LFR, has added his name to the free agency list. So far, he seems pretty confident in the future.

“Obviously, it’s not the news you want to have, but I’m thankful for the time I got to spend at LFR and the great people there and got to build something fun and be a part of it and get ready for the next step,” said McDowell on SIRIUS XM NASCAR Radio’s The Late Shift.  “K-Love has been a long supporter of my career, and I have spoke with them over the last few days and they made it very clear that they never sponsored the equipment. They’ve always been supporters of mine, and wherever I want to go and however that looks, they’ll be behind it.”

We know for sure Matt DiBenedetto will return to Go FAS Racing in 2018. But when it comes to most other underdog teams, we aren’t sure on what the future holds past Homestead-Miami Speedway. McDowell’s move is just the first of many.

Front Row Motorsports will have three charters next year after the charter Tri-Star Motorsports leased gets returned. David Ragan rejoined the organization after departing from BK Racing last year, and I don’t see that changing during the offseason. But the No. 34 car? That is where things get interesting. Rumors have placed McDowell at FRM in 2018, a signing that could leave Landon Cassill out of a ride. The organization has also expressed interest in Darrell Wallace Jr. should Richard Petty Motorsports not seal the deal. Or will FRM use that third charter to expand?

BK Racing, TriStar and Circle Sport with TMG all have uncertain futures hinging on sponsorship. Will there be enough money to go around for these teams? And if so, will they still want to make changes behind the wheel? Jeffrey Earnhardt, Cole Whitt and Corey Lajoie could easily bounce around in the offseason.

Plenty more musical chairs will begin to shuffle here over the next few weeks.

Top of the Class: New Hampshire

Ryan Blaney delivered a strong performance Sunday, finishing ninth. The quality run for this playoff driver was just what Wood Brothers Racing needed headed into the first elimination race at Dover on Sunday. The top-10 finish on Sunday was the team’s 10th of the season and first since Bristol in August.

Blaney now heads to Dover next weekend with a 26-point cushion on 13th place. Considering he told me a few weeks back New Hampshire was the team’s biggest concern, this sophomore is no doubt breathing a sigh of relief.

JTG-Daugherty Racing had a strong afternoon in New Hampshire, with AJ Allmendinger finishing 17th and Chris Buescher running 21st. Allmendinger earned his best finish since Watkins Glen International, while Buescher snuck inside the top 25 for a second straight weekend. Both drivers finished rather close to each other again in the standings, which shows some equality in the organization.

Ty Dillon earned his 16th top-20 finish of the season, running 22nd. Michael McDowell moved up eight positions from his starting spot to snag 23rd, while Landon Cassill finished 25th. All of these drivers and teams should be happy with that effort at a track that heavily favored both big teams and championship contenders.

An abundance of underdog teams finished in this category this weekend after many of them took advantage of the wreck on lap 151 that took out a few of the crucial frontrunners, including playoff drivers Kurt Busch and Kevin Harvick.

Aric Almirola finished 26th, ending his streak of finishing inside the top 25 at three races. Corey LaJoie and Reed Sorenson had a fair afternoon in New Hampshire, running 27th and 28th, while David Ragan had a OK run going until lap 169, when he made hard contact with the outside wall. He wound up scored 29th, four laps off the pace.

Cole Whitt earned his best finish since Darlington Speedway, when he finished 33rd. With the exception of a few lucky breaks, Whitt has been a staple in the 30th-or-worse category this season. With its charter expected to return to Front Row Motorsports in 2018, I am wondering if the No. 72 team will return next season or cut back to running just the XFINITY Series.

A new sponsor for Matt DiBenedetto was about the best thing the team can take out of this weekend. Two straight 31st-place runs have to be a letdown for a Go FAS Racing team that is leaving people expecting more.

In his second straight race with BK Racing, Brett Moffitt tied his season-best finish of 32nd. The problem is that in four races, he’s finished there three times. Gray Gaulding, a former BK Racing driver, wound up 33rd driving for Jay Robinson.

During the lap 151 crash, Jeffrey Earnhardt wasn’t able to slow down fast enough, and he rammed into the rear of Kurt Busch, ending both their afternoons. Earnhardt wound up with another disappointing 38th-place result. Finally, Cody Ware parked his No. 51 Chevrolet just 74 laps in with a faulty rear gear. He finished dead last (39th).

LFR revealed last weekend that Kahne would be replacing McDowell in 2018. The move leaves McDowell without a ride for 2018, but longtime sponsor K-LOVE Radio revealed it will remain with the driver wherever he goes. With K-LOVE, McDowell does have one thing a lot of the others don’t on the free agency list, and that is a sponsor.

As Dustin Albino reported Sunday on Frontstretch, Brett Moffitt is expected to return to BK Racing the remainder of the season.

“He’s a great driver and we think we can get him sponsored and that’s what we’re trying to do,” Ron Devine, owner of BK Racing, told Frontstretch. “He’s working on it. We’re working on it, and we’re happy to have him a part of our organization. There are a couple of other drivers who have some sponsors that may boot him for a few races here and there, but if that doesn’t come together we’re going to try and run Brett.”

Premium Motorsports announced that Tommy Baldwin will take over as the team’s competition director and the crew chief of the No. 15 entry. This announcement comes after Premium announced it had acquired all assets from TBR. The acquisition includes Baldwin’s entire Cup Series inventory, including everything from the team’s race vehicles to its equipment. It also includes the trucks that were leased by TBR to the No. 52 NASCAR Camping World Truck Series team.

Proud of the Wood Brothers group for putting together a solid day at a track I struggle! Them boys and girls work hard.

I've decided to take this #caturday and do some "self-reflecting"… @AJDinger @NHMS #travelingtickles ? #cattitude pic.twitter.com/lEcXwuNjis

I am very thankful for the 4 years we had @LFR95. I am not sure what the future holds but I know Who holds it. Excited for what is next.

Nascar is dead…won’t have a full field next year.