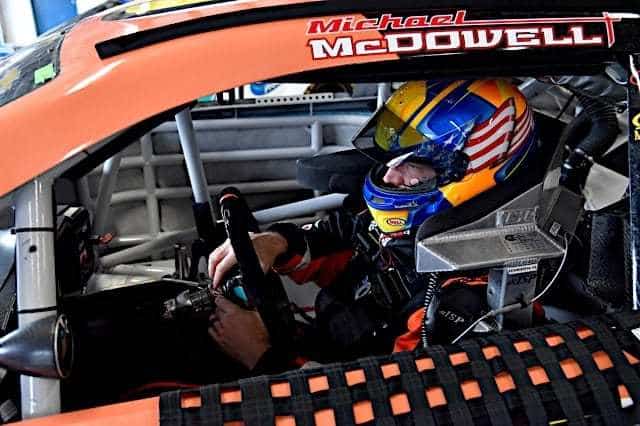 Michael McDowell is searching for options after Leavine Family Racing announced it will have Kasey Kahne on board for the 2018 season.

Soon after Kahne won July’s Brickyard 400, he became one of the hottest free agents on the market, and his talents are being taken to LFR. While the team would like to have two cars down the road, they’ve chosen the Hendrick Motorsports veteran as their primary option.

What will that mean for the man he replaced?

McDowell, 32, is in the midst of his first full-time opportunity during his 10-year career in the Monster Energy NASCAR Cup Series. He posted a career-best effort in July at Daytona International Speedway, finishing fourth and sits 26th in the season standings.

But that, along with the support of a sponsor (K-LOVE Christian radio) wasn’t enough to keep the seat. It just gives him motivation and confidence another opportunity will come along.

“I’m not done yet,” McDowell told Frontstretch at New Hampshire Motor Speedway. “I don’t feel  that a door is closing altogether. I just think it’s a new chapter and I think I will be back here in the Cup Series. If not, I think I will be doing something in NASCAR at some level.”

The Phoenix native has been with LFR for the past four seasons, running a partial schedule between 2014 and 2016. This season, his average finish has jumped to 21.6, which is three positions better than his previous career best.

Due to McDowell’s recent success, the thought process is fairly simple going into 2018.

“My mindset is really about finishing this year strong,” he said. “Obviously, you’ve got to have a job and this is the way I provide for my family, so I’m working on things and I feel really good that there are some options and opportunities. I don’t have anything done, yet.

“Luckily, for us, it’s been a pretty solid year. Our performance has been good and obviously that helps when you’re trying to find a job. You’ve got to take it one day at a time.”

Bob Leavine, owner of LFR, mentioned that the team’s focus going into the offseason is to prepare Kahne and the No. 95 squad to the best of its ability. However, he wants the program to continue to improve and take steps like it did this season with McDowell.

To do that, Leavine’s new driver will have to reverse a downward trend. Other than that July win at Indianapolis Motor Speedway, Kahne been struggling through a difficult season. He’s posted only four top-10 finishes in top-tier equipment with an average finish (20.5) close to McDowell’s.

But Kahne’s new car owner believes he can do it. There is still a strong support system and a wealth of knowledge that the veteran driver brings to the table.

“Experience, playoffs, 18 wins,” Leavine said to Frontstretch as to why Kahne got the nod. “Michael has great desire and work habits and all of those things, which we took advantage of. It’s almost like why did Rick (Hendrick) decide to put William Byron in that car? What made him better? I don’t necessarily know that it’s better, but we need to make a change to see what we can do. I think in our life cycle with where we are, Kasey gives us that [opportunity].”

“He’s been over there with [Dale Earnhardt] Junior, Jeff [Gordon] and Jimmie Johnson,” Leavine continued. “My sales pitch to him was you’re going to be the man in our stable. You’re going to be the guy. I think we can do that for him and conversely, he can do that for our guys and say, ‘Hey, we need to step our game up to make the playoffs.’ He’s a guy who’s won in the Cup Series. It’s one feeding off the other. I think we can make him better, build his confidence and he can help us and build our confidence.”

LFR will continue to work with Richard Childress Racing as part of its technical alliance. However, Leavine admitted that management did have conversations with Hendrick Motorsports regarding a future partnership.

“We looked at the Hendrick alliance and they were really gracious and talked to us, but we have a two-year relationship with RCR and the timing just didn’t work out,” he said. “We felt more comfortable not making that switch and having a first-year driver with us. Our engineers know them, our people know RCR and I really believe and know that we’re going to have our program be better.”

Leavine also mentioned that Rick Hendrick, owner of HMS, sat down with him to discuss why Kahne should join the family-owned team.

As far as the potential of adding a second car to the driver lineup, that timetable is running out. Leavine said that by mid-October, a sponsorship deal would have to come to fruition to be a possibility heading into Daytona.

McDowell would be welcomed back to the organization if that opportunity materializes. And if he still needs a spot in the sport, Leavine will do what he can for his current driver – even if it’s putting him on top of the pit box.

“We’re all proud of him and what he’s brought is that determination,” Leavine said of McDowell. “There’s nobody that works any harder in that seat and when he’s out of the seat. In fact, I’ve talked to him about ‘If you don’t want to drive, we have a place in our organization for you.’ I would love for him to work for me. He’s a world of knowledge.

“Obviously, I couldn’t next year, but he would be a great crew chief down the road. His strategy, what he knows, the cars, the aero, he knows a lot. There’s other factors that a driver can bring to a team that are more recognizable, the marketing people can sell. That’s one thing that Kasey can bring that Michael hasn’t gotten there, yet.”

McDowell, meanwhile will try and continue in the sport any way he can for 2018. Just don’t throw out the driver label and call him a mechanic just yet.

“I haven’t ruled out anything,” McDowell elaborated. “I don’t know about being a good crew chief. But obviously, being in this sport a long time, you learn a lot. With driving with the teams I’ve drove for, I’ve had to be involved in every aspect. It’s not where I just show up on Friday and everything’s ready to go. It’s kind of forced me to understand the business, how the cars work, how teams function and what good leadership looks like.

“I’m sort of in the rhythm now of racing every week and running full-time and feel like I’m in a good spot. I don’t feel done yet, and hopefully, I won’t be.”

While I think you deserve better, you may very well be done.

a good wheelman and great road course driver. If not Cup, hope he can find a good ride in Xfinity or Trucks.