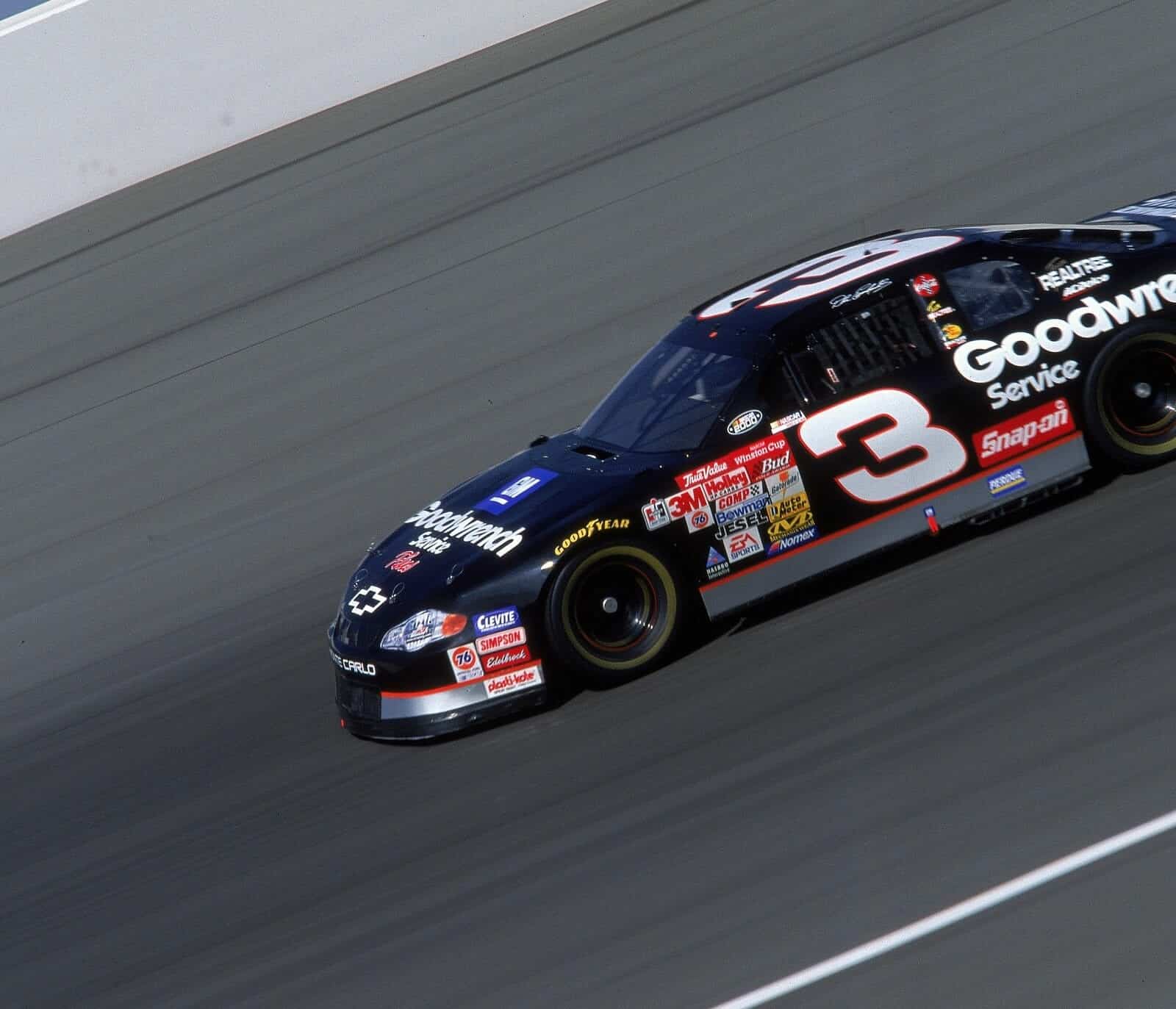 Who’s the best driver you ever saw race? That’s the question our staff tackled this week and we got a wide variety of answers. From the local tracks to the biggest racing stages in the world, there are many worthy candidates for this list. Let us know your picks in the comments section!

Admittedly, there are going to be a lot of people that don’t like this statement.  However, given what I’ve watched over the past eight years and what he’s done in his career, it is probably a guy named Brett Hearn. For NASCAR fans, Hearn had a brief career in what’s now the NASCAR XFINITY Series back in the 1980s.  He started 20 races, exactly one of which is on YouTube (Rockingham, 1986).  He only earned a best finish of 10th at Dover back in 1982.  Hearn left NASCAR for good after a nasty rollover crash in the 1989 Goody’s 300 at Daytona.

But just because Hearn left NASCAR doesn’t mean he’s left racing. Since then, Hearn’s been racking up wins and championships at a ludicrous rate.  Last month, he earned his 900th career feature victory, a feat that likely won’t be matched anytime soon.  He’s won the last six Modified track titles at Lebanon Valley Speedway and gets accused of cheating so often that you’d think they would have forced him to strip nude on the frontstretch in front of everyone so that his Nomex could be inspected by now.

Hearn’s 59 now and has a bad back.  Despite that, he’s still a tough out anytime he shows up at a track. –Phil Allaway

Most NASCAR fans associate the name Peyton Sellers, if they know who he is, as a guy who used to run 25th in the piece of junk No. 97 in the XFINITY Series. However, if you keep up with the Virginia Late Model scene at all then you know Sellers as a wickedly talented driver capable of winning anywhere he goes. This past Saturday night, I had the chance to watch a late model race, the ValleyStar Credit Union 300 — the first ever race under the lights at Martinsville Speedway.

Timothy Peters won the event, and he is extremely talented in his own right. But it was Sellers’ rally to a third-place finish that impressed me. Sellers was involved in a wreck and the crew spent extensive time repairing damage (not having a five-minute clock is a wonderful thing). In the final 25-lap shootout, Sellers went from somewhere in the 20s to second place.

Sellers did so by using the high line, at Martinsville of all places. His remarkable pinching and door banging, as well as a few wrecks by drivers in front of him, enabled the veteran to work through the field and get to Peters’ bumper. By then, Sellers’ tires and car were worn out. Lee Pulliam even got around him in the closing laps for the runner-up spot. But when all was said and done? It was truly a thrilling comeback to watch. Sellers, Peters, and Pulliam all deserve good rides in the top three series of NASCAR more than half of the drivers out there. –Michael Massie

I realize this one may be the easy answer, but… Dale Earnhardt. There’s plenty of examples out there, from the pass in the grass to his well-documented restrictor plate prowess. But in 2001, he made one of the most impressive saves I’ve ever seen during the IROC race at Daytona. It’s largely overlooked, given what took place two days later but still stands as one of the greatest examples of car control. –Frank Velat

The first auto race I ever saw, in person or otherwise, was the 1997 summer race at Loudon, and Dale Earnhardt is part of the reason I kept watching. He finished second, but ran such a calculated, masterful race, picking off rivals one at a tim. It was like some predator stalking its prey.

From that moment on, it was impossible not to be riveted by that black No. 3. –Amy Henderson

The best driver I’ve ever had the honor of watching was the late Tim Richmond. Richmond was the Modern Era blend of moxie and marketing; he’d charm corporate sponsors at a meeting on Wednesday, then dominate a field of Winston Cup superstars on Sunday. Rick Hendrick has said that Tim would put on a suit and take business meetings just as comfortably as he’d put on a firesuit and run nose-to-tail against Dale Earnhardt and Darrell Waltrip.

We all know how Tim’s off-track interests ultimately cost him his life, but oh, how he raced. The driver turned heads when he hitched a post-race ride with Johnny Rutherford at the 1980 Indianapolis 500 but made real headlines a few years later when emerging as a true NASCAR winner. His battles at Riverside became legendary, road course skills that earned him the first win at Watkins Glen when the series returned there in 1986. Had Tim Richmond lived, I have no doubt he’d have been a multiple-season Monster Energy NASCAR Cup Series champion. He was one of the best. —Mark Howell

I’m going to step outside the Cup ranks as well. I was lucky enough to live in the Northeast when Ted Christopher was tearing up every series he ran. I remember weekends at Loudon when he’d be a threat to win in three of four races: Modifieds, Busch North, and what’s now the XFINITY Series. Christopher was super aggressive, and while he’d try to pass a driver clean, if he had to move them, he did.

There were so many great drivers running the Modifieds and the old Busch North Series then: Christopher, Mike Stefanik, Andy Santerre, Martin Truex (the elder; his kid was just getting started then). Those series often produced the best racing of the weekend, overshadowing the national divisions. –Amy Henderson

Since most everyone has named NASCAR drivers – each of them worthy – I’d like to include someone from a different form of motorsports: Ayrton Senna. The master of Monaco who could make a car dance with his hands came to prominence in Formula One right before traction control, semi-automatic gear boxes, and a vacuum cleaner-like thrum of the current four-cylinder engine package.

The tooth-and-nail rivalry between Senna and Alain Prost still stands as one of the most bitterly real on-track rivalries in racing. In the end, Senna was taken far too soon. It happened on a tragic weekend at Imola in 1994, one that also saw the passing of Roland Ratzenberger and nearly Rubens Barrichello.

There are two endearing visual memories I have of Senna. The first is the amazing qualifying lap at Monaco in 1990 working wheel, shifter, clutch, and brakes. While the 3.5L V10 Honda wails behind him, he’s sawing to opposite lock on corner exit every other turn.  The other was this heel-and-toe instructional hot lap. Senna was doing some promo work with Honda, taking a lap in the then-new Acura NSX at Suzuka.

I think it should be THE ATTEMPTED PASS THROUGH THE GRASS. Not much traction.

I’m shocked they didn’t call the IROC thing the Pass In the Grass 2K1 or New Millennium or something.

Despite Richmond’s talent I can guarantee he would have never won a Monster Energy NASCAR Cup Series title. He would have been retired from full-time Cup series driving by 2017.

You had to see Jack Pennington at Hartsville-Darlington!

Local Geoff Bodine! Final answer! Daddy taught him & Brett English at Waverly HS in Upstate NY. Starting watching Geoff race mods early on in his career, when I was knee high to a grass hopper. Loyality to my Bodine family tie-in prohibits me from being a fan to this day, but I respect the “Big E” immensely.
After all three Geoff, Brett & Todd Bodine, the personal favs I have seen are Richard Petty, followed by Mark Martin, with honorable mention going to Marcos Ambrose.
Although, as far as all time motorsports greats, with my personal preferences removed, whom I have NOT seen, I would have to a rank dozen or two road-course icons ahead of any stock-car oval legends. Gents like Schumacher, Hamilton, Senna for starters. They turn left AND right you know?
Never saw Team Penske’s founding mech. engineer / driver / brother-en, Mark (aka: “Captain Nice”, aka: “Dark Mono-hue,”) Donohue, but he’s a definite sleeper fav &, by far, the one I most wish I could have seen.

You folks forgot the best of them all, Grover Cleveland (G.C.) Spencer in the Flying Saucer!!!

And his nemesis, “Bullet” Bob Reuther, who just happens to still own the modified speed record for the old beach course at Daytona.

Tony Stewart. The man could hop in any race car on any track and be a threat to win. I remember back 15ish years ago he came to Sharon Speedway here in Ohio (owned by his dirt track buddy Dave Blaney) for a big block modified show as the feature driver. This was a track he had never set foot on at the time, driving for a car owner he had never driven for, in a class of car he had never driven. He went out and drove a line that nobody at the track ever runs in those cars (high on the cushion and wide open like a sprint car) and won the race. And that is a story very typical of his racing career. Anybody can win in Na$car or Indy with the right car and $$$, but dirt is the great equalizer, and man can he run the dirt.

Kyle Larson for a close second. Following Tony’s career path through the dirt ranks, except skipped Indycar. Just as good if not better, would love to see those two head to head, each in their prime, in a Sprint Car. A run of 6 straight sprint wins this summer IN HIS SPARE TIME from a breakout Na$car season.

ever actually saw? tie.
mike stefanik or ted christopher in the mods.
they both raced with their heads and their hearts for the win.
both full of pure talent backed with passion luck and desire
while both excellent, mike usually had better equipment but i think teddy drove harder.
but then again i saw mike go on his roof on the backstretch at thompson… somehow managed to finish that race after they righted the car (remind you of anyone?)
i think that’s the year he won a championship by one point.
Teddy however drove my minisprint in an indoor winter race and cleaned the field’s clock but then again i beat him in a go kart at the woodstock fair when we ran in the tri state kart club.
both truly great racers.
so… tie