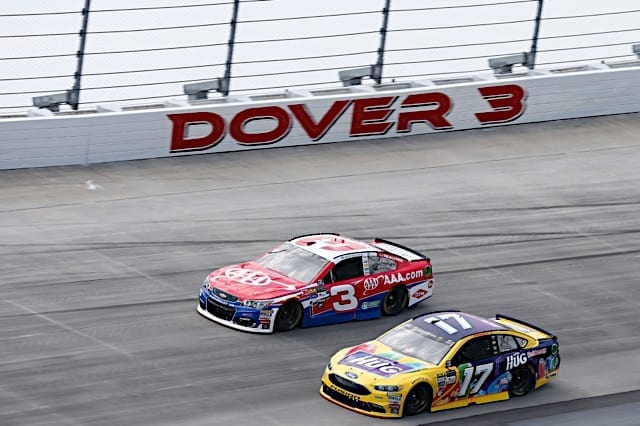 Who Breaks the Points Tie in Cutoff Race at Dover?

Despite the fact we have 28 races of playoff and stage points stacked up to every playoff driver entering this weekend at Dover International Speedway, Sunday will come down to every point.

Four drivers will exit the championship group after Dover as Round 1 wraps up, shrinking the field from 16 to 12. Though four drivers are locked in by wins or points, the air gets thin around the cutoff spots — particularly for two in Ricky Stenhouse Jr. and Austin Dillon, who are tied for the 12th and final spot for Round 2. Ryan Newman is also close back of the two by only one point.

So that’s three guys for one spot, though there are other potential situations where a Jamie McMurray or Kevin Harvick can fall out or a Kurt Busch can climb in. We’ll focus, however, on the battle that is guaranteed to be close.

A first-time playoff driver, Stenhouse came in with two wins at Talladega Superspeedway and Daytona International Speedway but struggled in the meantime with no top 10s since July. Thanks to those 10 playoff points from those wins, he’s in a much better spot for this cutoff race, but they’re not the only reason, as Stenhouse fought back from hitting the wall early to get a top 15 last week at New Hampshire Motor Speedway.

Behind the Roush Fenway Racing racer is Dillon, another driver who hasn’t made much wake since hitting the winner’s circle. He got his win in May at Charlotte Motor Speedway and has only two top 10s since, putting hims in a dead tie with Stenhouse for the final 12th spot.

Overall, 2017 has been a dip from last year for Dillon, with only four top 10s total and an average finish nearly four spots lower than 2016. And that performance has bled into the playoffs, with finishes of 16th and 19th. In a battle as close as this one, a simple eighth-place finish (like he got in this race last year) could be enough to advance… unless someone really steps up their game.

Stepping up one’s game? Coming out of dirty air to grab a surprise top-five finish? This is Ryan Newman, right? Yeah, he’s been pulling off those better results this year and could very easily get another when it counts this Sunday. With a win at Phoenix International Raceway and top fives at Richmond Raceway, Michigan International Speedway, Indianapolis Motor Speedwayand others, Dover was also one of those top results for Newman, finishing fourth after the last-lap crash with Ty Dillon.

Among these three, 2017 has been a year of highs and lows, with the lows putting them in this position in Round 1. However, they’ve also shown the potential to pull off wins when nobody saw them coming. Now is the best time to sneak out the latter.

And who better to also make their 2017 debut than Travis Pastrana?

He’s a four-time Rally America champion and X Games gold medalist who raced a full season with Roush Fenway Racing in the XFINITY Series in 2013. Now, he returns in the Truck Series the first time since 2015, racing for Niece Motorsports in its No. 45 Chevrolet.

Plotting an expected result for the Nitro Circus mastermind may seem tough, but equipment and talent may make it doable. Saturday will only be his third start in the series, with each separated by at least two years and all taking place at Las Vegas. Despite the off-time in between, the results have been solid, finishing 15th with Thorsport Racing in 2012 and 16th with NTS Motorsports in 2015, less than four spots behind the team’s average finish that year.

Another team with a solid average finish is Niece, which has competed this season with six drivers. All together, with 10 top-20 and six top-15 finishes, the No. 45 has brought consistent pace to the track each week.

Will that spell a decent night or something more? Pastrana has made it known that a full-time future in NASCAR is still prime in his mind. A strong night this weekend could be that next step toward something more.

And by the looks of his preparation techniques, he knows it.

If there’s one driver who has gathered the most support in a two-week period in 2017, it’s Cole Custer.

Leading a combined 90 laps in the last two races in the XFINITY Series, Custer has emerged as a name who could advance to the Championship 4 at Homestead-Miami Speedway in November. Though the finishes aren’t crazy impressive with one top five and five top 10s in the last six races, the brick wall between running sixth and leading laps has been torn down by Custer more recently.

And it’s been a long time coming in Stewart-Haas Racing’s first season in XFINITY. Despite its tenure in Cup since 2009, Custer, 19, was the one to get the team’s XFINITY program started, and the team has been inching close to its first series win.

Sitting tied for the lead in playoff points after the first race in Kentucky Speedway, this weekend has the look of similar fortunes. For Custer, he finished fifth in the Truck Series last year at Dover and backed it up with a fourth in the XFINITY Series in the spring.

Can he step it up even further this time? He’s in rare air after Round 1, dicing up the JR Motorsports hold of the top three spots in points. But just like Justin Allgaier, Elliott Sadler and William Byron, it’s been a tall order beating Cup drivers, who will include Austin Dillon and Ryan Blaney this weekend.

Will the F1 Championship Close Back up After Singapore Ferrari Clash?

Formula 1 shook in the first turn of Singapore two weeks ago. Kimi Raikkonen make a bold inside move following a perfect start, slid sideways, minus one wheel after contact, careening into the Red Bull of Max Verstappen when the street circuit took left.

But the destruction for Ferrari wasn’t over, as polesitter Sebastian Vettel spun into the wall after the hit from teammate Raikkonen, crashing out of the lead.

What did this accident create besides spark-filled photos for the off-week? A loosened championship battle.

When the dust settled after the first lap of the Singapore Grand Prix, Lewis Hamilton emerged as the race leader, jumping from fifth to lead the remainder of the night. A race win, his third straight of the season, expanded his championship lead from three to 28 points over Vettel.

Additionally, Valtteri Bottas could only manage a third-place finish, while Daniel Ricciardo couldn’t catch Hamilton for the win. A perfect night for Hamilton gives him come room for error in the final half-dozen races of 2017.

Unless Malaysian history repeats itself.

Last year at Sepang International Circuit — where the sport races this weekend for the final time in the foreseeable future — luck bit Hamilton right near the end, suffering an engine failure while leading with 16 laps to go. It was among the big shocks of the 2016 season, eventually proving to cost him the 2016 championship.

But the luck for Mercedes at Malaysia overall hasn’t been too pretty. In all 20 racetracks on the circuit, Malaysia is one of only two tracks where Mercedes has won only once since the team’s era began in 2014.

In its absence atop the podium, it was Vettel scoring his first-ever win for Ferrari in 2015, while Ricciardo brought Red Bull back to winning ways last year. Though Ricciardo is 101 points back of the point lead, Vettel’s gap of 28 can be eradicated through consistent results above Hamilton.

And even Bottas can still be taken seriously in the championship. The first-year Mercedes man, who has signed an extension with the team through 2018, is 51 points behind Hamilton but has scored one more podium than his teammate after 14 races (10 to Hamilton’s nine.)

The 3, 5, 17, 31, and 41 (and I could add about six more easily) shouldn’t be in the championship picture anyway except by virtue of Brian’s convoluted chase. So who cares.

Bette
Reply to  Bill B

Has sure taken the fun out of it !