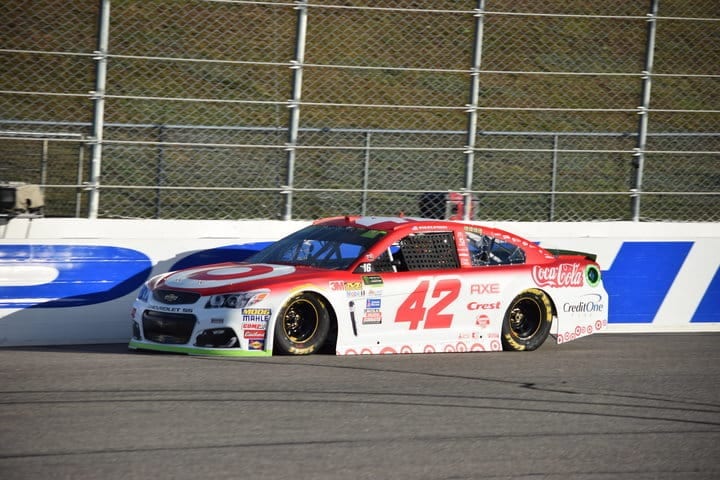 DraftKings’ daily fantasy NASCAR heads to Dover International Speedway this weekend for the Apache Warrior 400. This race marks the third and final event of the first round in the Monster Energy NASCAR Cup Series playoffs. The green flag flies Sunday afternoon at 2 p.m. ET on NBCSN.

This week’s fantasy forecast is brought to you by DraftKings, the No. 1 platform for Daily Fantasy Sports. You can jump in on all of the daily fantasy NASCAR action at Dover this weekend by signing up at this link for a free entry into one of this weekend’s contests. All you have to do is make a $5 deposit to get started!

Truex was running away with the race at New Hampshire last weekend, heading for a second straight win. But he was caught up in a mess on the backstretch heading to the green-and-white checkered flag to end the second stage. He still managed to pull off a fifth-place finish, even with damage to the rear of his car.

Truex has two wins at Dover, including this race last year, in which he led 187 laps. His salary is incredibly high, but the way this hometown favorite has been dominating, it will be worth it.

Larson notched his eighth second-place finish of the season last weekend, easily the fastest non-Toyota of the afternoon. But while recording 35 of the fastest laps at New Hampshire, he was only out front for one.

Larson has two near wins at Dover over his seven starts at the track. In the spring race of 2016, he had a hard-fought battle with Matt Kenseth but was unable to pull off the pass as the laps counted down. In June of this season, he led an unbelievable 241 laps at the Monster Mile. But, with three laps to go, Jimmie Johnson took over and stole the victory.

Expect him to be seeking revenge, earning points for your DraftKings team in the process.

Kenseth had a strong car at New Hampshire and finished third. Although still winless on the year, that gives him a comfortable cushion above the playoff cutline heading into Dover.

Kenseth has an average finish of 9.8 over the past eight races at the Monster Mile. That stretch includes one win, four top fives, and six top 10s. He’s also tied for second among all active drivers with three wins at the track, landing atop the board with 24 top 10s.

That track record makes Kenseth a safe pick for the top of a lineup if the prices for Truex and Kyle Busch are too steep. Don’t be afraid to use him.

Johnson is the all-time leader at Dover in both wins (11) and laps led (3,100). His numbers here are borderline fantasy, but what may be most impressive is his ability to have continued success. Dover is what’s known to Johnson as a slump killer. Whenever he is having a run of lackluster races, the No. 48 team shows up at Dover and turns it all around.

Although five straight top-15 finishes may not be considered a slump, per se, Johnson is not at the top of his game. He hasn’t led a lap since Daytona in July, and has not recorded a top-five finish since his win at, you guessed it, Dover back in June. This is a big race for the seven-time series champion.

Elliott has already developed a knack for running toward the front at Dover in the short time he has been at the Cup level. In three starts, he has two third-place finishes and a fifth. In all three of those starts, he finished higher than his qualifying position. Elliott has not started better than ninth in any of those three races.

The Hendrick Motorsports driver is battling back from a points penalty that followed Chicagoland but is in no immediate danger of elimination from the playoffs. He has a 26-point bump on the cutline entering Sunday.

That leaves this sophomore with little to lose. Depending on how fast the car is off the trailer on Friday, Elliott could potentially fight for his first career win this weekend.

Newman currently sits one point below the cutline following his 13th-place finish at New Hampshire. He and teammate Austin Dillon will have to put together a good race on Sunday in order to transfer to round two.

Newman has cooled off as of late, with finishes of 23rd and 13th following a four-race top-10 streak. Luckily, the veteran returns to a place where he showed promise earlier this year. Newman finished fourth at Dover back in June and it remains one of his better tracks historically.

Newman is still priced in the bargain tier, which makes him a great option at the back of your DraftKings lineups.

Dover: One start, one sixth-place finish
Average finish at Dover: 6.0

Suarez solidified his 10th top-10 finish of the season at New Hampshire last weekend and has progressed immensely over the second half of the season. He’s earned four top-15 results in the past five races.

Suarez set his career-best finish at Dover earlier in the season with a sixth-place result. He improved on that with a third-place performance at Watkins Glen in August. Suarez is 79 points behind Erik Jones for the top rookie in the MENCS standings and is motivated to turn in a strong run here.

Understandably, Almirola’s performance has not been up to snuff since his return from injury, which has resulted in his appearance as a bargain bin salary this week. His salary is what garners the initial attraction, but when looking at his history at Dover, Almirola is a much higher quality driver than the $5,800 lets on.

In 2015, he finished fifth in both races. During the spring race, he started 23rd and worked his way up. In the fall race, he started in 18th. In October of 2016, he finished a respectable 16th. His career average finish at Dover is 16.2, making Almirola a near must start if he qualifies outside the top 25. 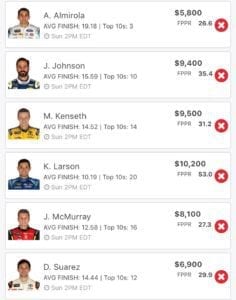