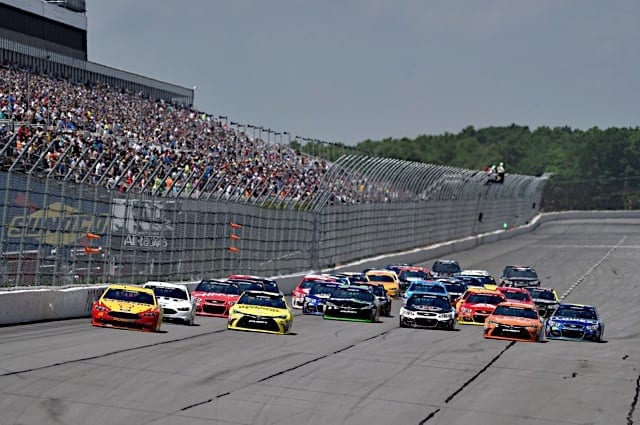 For an extremely brief moment earlier this week, a new Monster Energy NASCAR Cup Series team had joined the fray. StarCom Racing’s No. 00 showed up on the entry list for Dover International Speedway with Derrike Cope as its driver, becoming the 40th entry for the race.

However, by Tuesday night, Cope and co. had withdrawn, citing “personnel hiring and timing,” so that the team could show up fully prepared to the racetrack on an upcoming weekend. The count was back down to 39, though it bumped back up to 40 once Brett Moffitt and the No. 83 for BK Racing entered.

Still, though StarCom Racing hasn’t actually made it to the track just yet, the mere mention of the team existing was the talk of certain corners and channels of NASCAR fandom earlier this week (aside from, you know, that one tweet). “Why?” one may ask. It’s a small team with a driver who hasn’t won a Cup race since 1990 (and who’s driven for quite a few of this type of team since then, including organizations he owned himself). Why’s that interesting?

Well, because it’s 2017, and we take what we can get when it comes to new teams.

If and when the No. 00 makes it to the track, it’ll become the 44th different car to enter a Cup race this year, barring any other new teams that happen to show up before StarCom does. That’s right: as of now, just 43 teams have attempted at least one Cup race in 2017.

You remember when there were 43 cars in every race, right? It wasn’t that long ago; 2016 was the first year with a 40-car starting grid, in fact.

That number is a four-team drop from 2016, when 47 different cars attempted a race. Some were one-offs, like Hillman Racing’s Daytona 500 entry with the No. 40 and Ryan Reed’s Cup debut with Roush Fenway Racing in the No. 99 at Talladega Superspeedway. But there were more nonetheless, and it’s a number unlikely to be eclipsed in 2017, even if the No. 00 cuts the deficit to three.

The charter system certainly has something to do with this. With less spots (just four) available for teams that aren’t part of the 36-car charter group, the odds of making a race if you’re a smaller effort have gone down further than ever before (even though a good chunk of the races this season haven’t even been able to get to a 40-car entry list). And that’s not even to speak to the payouts.

As a result, you’re seeing the pool of cars ready and willing to start a Cup race dwindling more and more. The race to qualify for the Daytona 500, once one of the most exciting aspects of the entire NASCAR season, was barely a factor this year, with just two teams missing the race — one per qualifying race.

Compare this to 10 years ago. In 2007, there were 45 teams running in the Cup Series full-time alone (with a few more intending to but not making it through the entire year). When adding in part-time efforts, the number balloons to around 70.

Yeah, 70 different teams that could show up on a weekly basis. Some were simply extra cars fielded by major organizations like Team Penske or Richard Childress Racing. Others were tiny efforts from teams like Fast Track Racing, Brandon Ash Racing, even James Hylton’s Daytona 500 attempt that nearly came to fruition if not for a clutch issue.

Even two years ago, the number was in the 50s, and so on and so forth. Granted, two years ago was also, much like now, fairly bereft of one-car, often one-off or two-off efforts. The closure of major teams like Michael Waltrip Racing is certainly a factor in the diminished car counts, but it’s the whole story. Gone are the days when a fan could look up the entry list for the Cup race (or really the XFINITY and Camping World Truck series races these days, for that matter) and be genuinely surprised about an entry outside of, perhaps, the driver in the car.

It’s rare to check out the number or owner column and find something that raises a red flag, an unknown in the mind of someone who’s more than a casual fan of the series. There’s a mundane feeling to it all, little surprise, far less room for spontaneity. One could guess the entry lists before they’re posted and probably guess 90 percent of it or more.

That’s why something like StarCom Racing and Cope’s announcement of entry into the series is met with far more interest than smaller efforts likely were 10, 20, even 30 years ago. It’s not that the team necessarily has any qualities that makes it stand out from its competitors, at least on paper. It’s the fact that it’s showing up at all that’s inherently interesting.

Think back to Carl Long’s announcement that his No. 66 would join the series on a part-time basis, Long’s situation with NASCAR following his $200,000 fine in 2009 that knocked him out of the series apparently resolved. That aspect was intriguing because many figured he’d never make it back to that level of the sport, given his team’s shoestring budget and the size of the fine. But beyond that, hey, it was a new team! Yeah, it wasn’t going to be a race winner right off the bat, but it broke up the monotony, provided an unknown.

Team’s like the Nos. 66 and 00 aren’t exactly something we get much anymore. And maybe that’ll change eventually, but for now, we should enjoy them while we have them. Or, you know, not, and only pay attention to the mega teams. Your call.

Just more signs of the malaise in Nascar these days as they more further and further from their roots and drive off more of their traditional fan base with the contrived excitement that is the Chase. Their fan base started eroding around when the Chase was dreamed up and has continued unchecked since. The only remaining question is where is the bottom, and can Nascar survive when they make it there?

Oh, NASCAR will survive. They should change the name though, since there is nothing STOCK in these “stock cars”. I miss the days when USAC made at least a little competition to NASCAR.