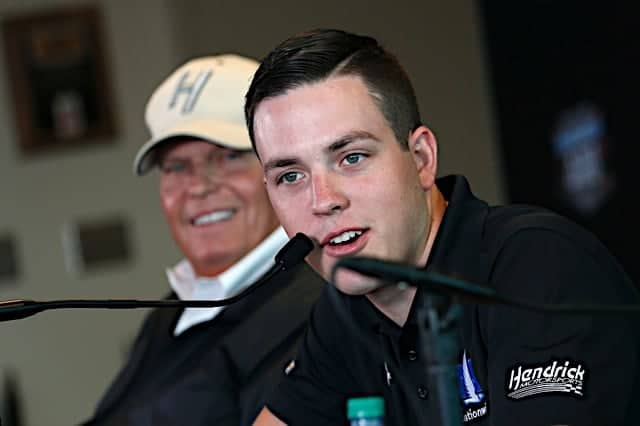 Alex Bowman‘s 2017 has seen a lot of testing and not much racing, except on the Chevrolet simulator. That will change next weekend at Charlotte Motor Speedway.

On Friday, Chip Ganassi Racing announced that Bowman will pilot the No. 42 car with HendrickCars.com as the primary sponsor for Charlotte. The 24-year-old will also compete with CGR in the penultimate race of the season at Phoenix International Raceway, the track that he led a career-high 194 Cup Series laps during the fall race in 2016, replacing Dale Earnhardt Jr.

“I’m really excited to get back in a race-winning car with a team like CGR,” Bowman said in a press release. “A huge thanks to Chip [Ganassi] and Mr. [Rick] Hendrick for putting this together for me to get some valuable seat time heading into 2018. My goal is to win two races and help the No. 42 team win the NXS owners’ championship.”

Tyler Reddick advanced the No. 42 car into the second round of the playoffs by winning at Kentucky Speedway last weekend. He will be behind the wheel at Dover International Speedway this weekend, as well as Kansas Speedway and Homestead-Miami Speedway.

Ganassi is excited about merging with Bowman for a pair of races.

“He’s a great young talent, who can help us with our goal of winning an NXS owners’ championship,” Ganassi said. “Initially those two races were earmarked for Larson but we wanted him to focus on the Cup playoffs so we appreciate Rick [Hendrick] and his team for allowing us to put Alex in our car. Hendrick Motorsports has been a tremendous partner of CGR for many years.”

Bowman’s primary sponsorship for Phoenix will be released at a later date.