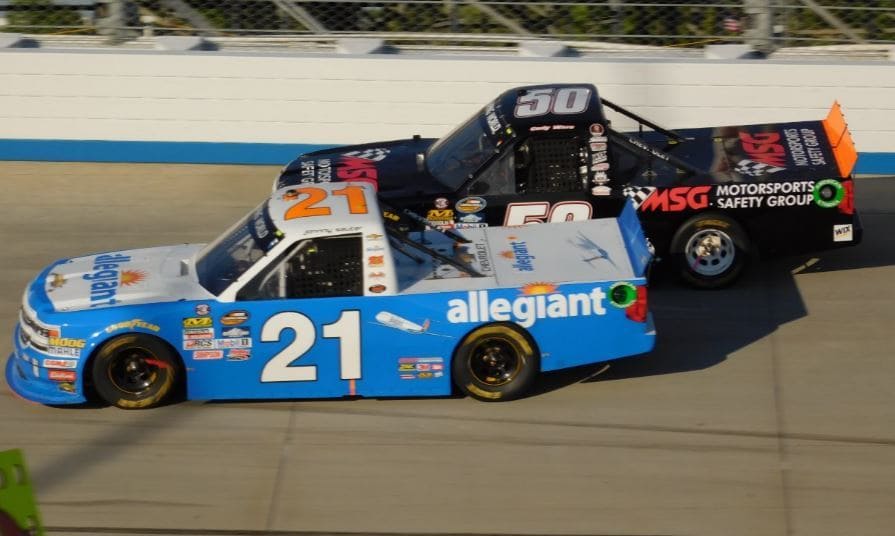 All eight playoff drivers took laps in this session with John Hunter Nemechek the worst of the eight in 15th.

20 of the 28 trucks entered turned a lap in the session, with Myatt Snider turning the most laps at 35. Mike Senica turned the least amount of laps with just one. There was a 11.812-second difference between the first-place car and 20th-place car.

Grala was fastest in the final practice session of the day. He turned a lap of 30.160 seconds (179.045 mph.) Gragson finished fourth in the first session and improved to second in this session. Playoff drivers Christopher Bell and Sauter finished third and fourth with Truex rounding out the top five.

All 28 trucks turned a lap in this session with playoff driver Chase Briscoe turning the most at 44. Todd Peck turned the least amount of laps with just one. There was a 5.701-second difference between the first place car and the 28th-place car.

12 drivers turned more than ten laps consecutively with Crafton being the fastest (176.225 mph). Briscoe and Grala finished second and third, respectively, followed by Truex and Bell.

NCWTS Qualifying will be live on FS2 beginning at 6:10 p.m. ET. It’ll switch over to FS1 at 7:00 after the Milwaukee Brewers vs. St. Louis Cardinals game. A 30-minute simulcast period (where the session is on both FS1 and FS2) is built in just in case the baseball game runs long. NCWTS Setup goes live at 7:30 followed by the green flag at 8:00.