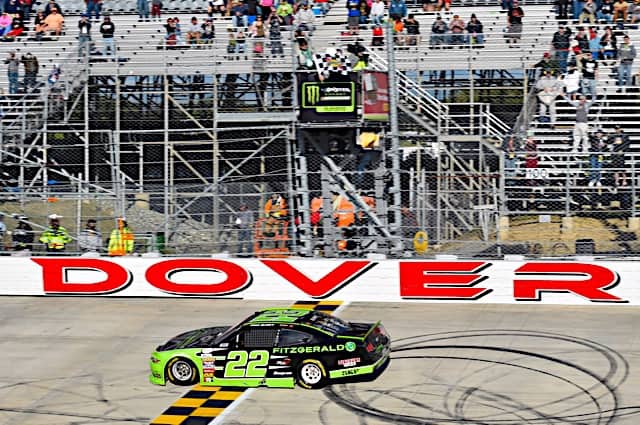 After sweeping the pair of practice sessions on Friday, Ryan Blaney became the favorite for Saturday’s Use your Melon Drive Sober 200 at Dover International Speedway. However, with an eighth-place qualifying effort, the driver of the No. 22 had to pass some good cars to get to the front.

Blaney was chasing down pole-sitter William Byron for the lead at the end of the opening stage, only to finish runner-up. But as soon as the No. 22 crew got the driver off pit road first, there was no looking back.

Over the final 140 laps, Blaney was out front for 136 of them, only losing the lead during the stage break between the second and third stages. Once the green flag waved, the No. 22 was on the gas, to get the lead back.

“It’s really hard to get a car like that and to be honest we didn’t have it in the first run,” Blaney said in Victory Lane. “We were a little bit off on the first run. We made some great changes after the first Stage to get it better to where it needs to be. We actually got it better for the last run. I think this team does a great job with that of maybe not firing off the greatest but they know how to work on it and make it better throughout the race.”

This is Blaney’s second triumph of the season in nine races. The victory advances the No. 22 Team Penske entry into the second round of the playoffs in the owner’s championship.

The playoff teams came to compete despite a Cup Series regular going to Victory Lane.

Byron won the pole, ending a slight drought since winning three out of five races between Iowa Speedway and the Brickyard. The No. 9 team finished third, just his second top-five result since winning at Indy.

Justin Allgaier finished runner-up, making it three consecutive top-three finishes for the No. 7 team. That’s the veteran’s best span of races during the season. Daniel Hemric and Brennan Poole rounded out the top five, and both are looking good heading into the cutoff race at Charlotte Motor Speedway in terms of advancing to the second round of the playoffs.

Matt Tifft rebounded from an early incident to finish sixth. It’s his third-consecutive top-10 finish, the first time the rookie driver has accomplished the feat in 2017. Cole Custer, Elliott Sadler and Brendan Gaughan also finished among the top 10.

The two drivers that are in an all-but-win situation at Charlotte are Blake Koch, who finished 19th and ran outside the top 20 for the majority of the 200-mile event and Jeremy Clements for finishing 22nd.

Brandon Jones‘ troublesome season continued at Dover, when he was involved in an accident on lap 4. The No. 33 car got loose in Turn 3, and while attempting to correct it spun in front of the field, only to get hit by Jeff Green.

Green was collected in the incident, almost like a wrecking ball. First, he slammed into the back of Tifft, damaging the rear of the No. 19 car, before pile-driving his way into the side of Jones’ machine. The two cars were stuck together and unable to continue.

“We were running really close together and the aero turned us around,” Jones said following the crash. “I wish we could have continued. I didn’t think we had that much damage, but I just couldn’t get up the hill enough to get us spun around. If I got moved or whatever, we could have kept going. I guess it’s part of the sport.”

Through 28 events, Jones sits 17th in the point standings, only 67 points ahead of Tyler Reddick. Reddick has competed in only 16 events.

The 39th-place finish marks Jones’ sixth DNF of the season, after having none in his rookie season. It’s the fourth time this season that he didn’t make it past lap 30 in the race.

Over the first 25 laps of the race, there were three cautions, involving eight cars and 16 caution laps.

The first of which involved the aforementioned Jones, Green and Tifft incident, also collecting David Starr, who piled into the crash late.

On lap 19, Harrison Rhodes blew an engine, laying down oil all over the racetrack. Luckily, no teams slipped in the oil.

The third caution, coming on lap 25, resulted in a three car pileup when Brandon Brown got into the rear of Chad Finchum sending him into a four wheel slide into the Turn 2 wall. When the No. 40 came back down the track, he got into the side of Reed Sorenson and the rear of Josh Bilicki.

This is why we should all be thankful for SAFER barriers. #NASCAR pic.twitter.com/6CZsSqonNW

At the end of the 200 laps, Brown was the highest finishing driver of the ones involved in the incident in 25th. The other three finished 30th or worse, and Sorenson and Finchum were retired from the race.

Saturday’s race at Dover may have been Ross Chastain‘s most consistent race of the season, which is ironic since his sponsor was the entitled sponsor of the race.

It started off in qualifying when Chastain made it to the final round of qualifying for just the second time in 28 races this season. It was his second-best qualifying effort of the year, starting from 12th.

Chastain remained in the top 15 throughout the entire event, and it was his best outing (12th) since finishing sixth at Daytona in July.

“It was solid,” Chastain said of his race. We ran between 10th and 16th all day. Lacking a little bit of overall grip that last run, but really tried to manage all four tires because I’ve blown a right front and right rear in the past. I didn’t want to do that, so I just paced along and maybe could have had two more spots, but I was just trying to be cautious and not pop another tire.”

The No. 4 team picked up it’s first top-15 finish since Darlington Raceway earlier this month. Leading up to the Lady in Black, Chastain had a career-best four straight top-15 finishes.

However, Dover has been a good track for Chastain in the past. Earlier this season, he finished 21st at the Monster Mile, but in this race last season, another 12th-place result.

“We showed up and were close and made a few small adjustments. We called it good there, Being in the Cup car helps a lot, and just putting together solid runs and completing laps is what I need. It’s been a good two days of that with all the practice and this race.”

Chastain rolls off 32nd on Sunday for Premium Motorsports. In his first-career Cup Series race earlier this season at Dover, he placed 20th.

Blaney was dominant, leading 136 of 200 laps. However, outside of the No. 22 car initialization, Cup regulars were not all that competitive in Saturday’s race.

Defending winner Daniel Suarez brought the No. 18 car home seventh, leading a pair of laps. Ty Dillon was the only other Cup Series regular on the lead lap in 13th.

After serving a speeding penalty proceeding the opening stage, Erik Jones raced his way inside the top 10 before having a loose wheel with less than 10 laps remaining. The No. 20 car finished 20th. Austin Dillon has struggled all weekend long on the XFINITY and Cup side, placing 23rd on Saturday.

“We’ve needed the consistency and we’ve had it there speed wise in parts of the season, but we just had things happen to us. So we’re just trying to be smart, you know?” – Matt Tifft

“We did what we needed to do. I was expecting more but we learned a lot and did the most with our car today.” – Cole Custer

“It’s a feast-or-famine track. If your car is good you’ll have a great day. You can more around and hustle and make the move you need to make. But if you miss it this place will eat you alive and just be along for the ride.” – Ryan Reed

Following the opening 30 laps of the event, Miles the Monster went to sleep. He attacked early on, causing three melees in the opening 25 circuits. However, after that, there was no caution for incidents over the final 170 laps, with only the two stage breaks stopping the race.

The entire second and third stages went caution-free, resulting in a strung out race. At the end, only 13 cars remained on the lead lap, but in June only 11 teams completed all 200 laps.

The XFINITY Series heads into one of it’s most important weeks of the season next week at Charlotte Motor Speedway. It’s the cutoff event for the first round of the playoffs and there is a tight battle for the coveted transfer spot.

The green flag is set to fly shortly after 8 p.m. ET next Saturday night. Joey Logano is the defending winner of the event, though Kyle Larson dominated, leading 165 of 200 circuits.

TOTAL B.S. HOW ARE THESE XFINITY DRIVERS ACTUALLY GOING FOR A CHAMPIONSHIP WITH ALL THESE