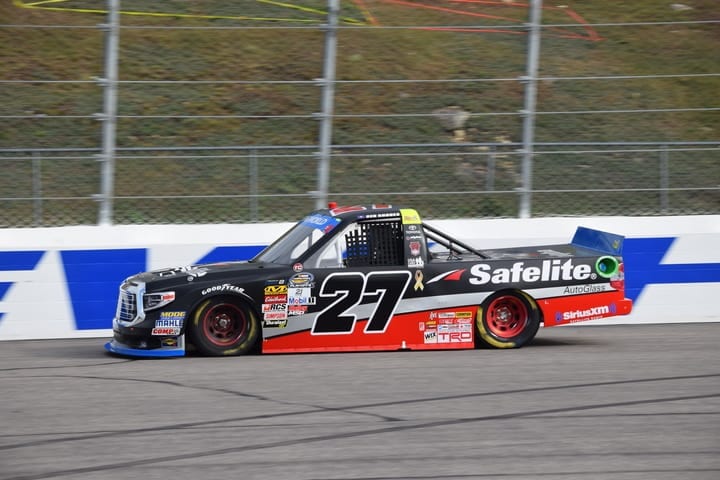 In a thrilling finish, Ben Rhodes took the lead with eight laps to go to earn his first career victory. Despite winning stage two, Rhodes had to overcome a strange final stage to earn the victory in Las Vegas. John Hunter Nemechek tried to gamble with fuel strategy, but when the caution came out that strategy went out the window. The caution set up for a restart with eight laps remaining and with the perfect restart Rhodes took the lead and had the run of his life.

With the victory, Rhodes joins Christopher Bell as a lock for the second round avoiding the worries of Talladega.

The first caution of the evening came on the first lap. While drivers were battling for every spot possible, Myatt Snider got turned and he made hard contact with the inside wall. In only his fifth start of the season, Snider would earn his second DNF of the season.

The third caution of the evening would have huge implications for playoff drivers as Johnny Sauter’s string of bad luck continued. Johnny Sauter would get turned sideways by the No. 19 of Austin Cindric, as Sauter spun Stewart Friesen had nowhere to go and he blasted the right side of Sauter’s car. The damage would be similar to the damage he suffered last weekend at New Hampshire. His night would go from bad to worse later in the night after he blew the right front tire and go three laps down after having to make an unexpected pit stop.

It was a strange night for playoff drivers, and Nemechek was seemingly having a strong night until a gamble failed. Nemechek was trying to make it on fuel (73 laps) but a caution would come out after Travis Pastrana made contact with Austin Wayne Self. As the caution flew, Nemechek would run out of fuel. He’d stall it on pit road but would avoid going a lap down. He’d finish eighth but the biggest thing is that he didn’t gain any on moving into the playoffs.

Heading to Talladega, Kaz Grala and John Hunter Nemechek sit on the outside looking in. Neither drivers are in a must win situations but the series heads to Talladega next, a track you don’t want to gamble with.

The Camping World Truck Series gets a week off before heading to Talladega Superspeedway for the Fred’s 250 powered by Coca-Cola. The green is scheduled for 12 p.m. ET and will be televised on Fox on Saturday, Oct. 14. Grant Enfinger is the defending race winner.