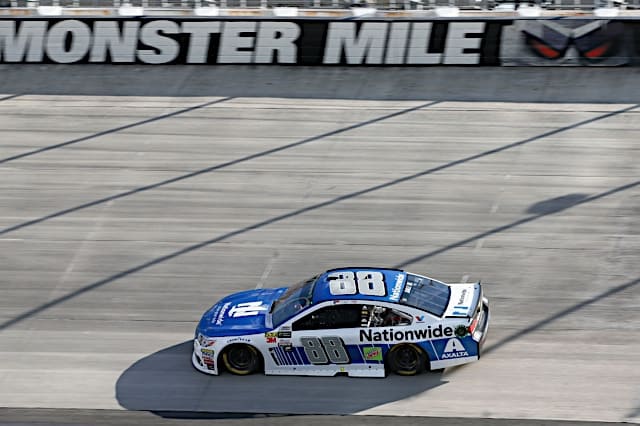 Sunday’s Apache Warrior 400 at Dover International Speedway was Dale Earnhardt Jr.‘s best outing in over three months, finishing seventh, while running better than that for the majority of the event.

Earnhardt, 42, was in the midst of his worst 12-race streak since 2009 with Hendrick Motorsports. The No. 88 team went 12 consecutive races without a top-10 result, dating back to Sonoma Raceway in late June. Only one other time he’s had such a streak since aligning with HMS in 2008, and that was between the spring race at Richmond Raceway and Watkins Glen International in August, with a best result of 12th, also coming at Dover.

During this streak of 12 races, Eanrhardt had a best result of 12th at both Kentucky Speedway and Pocono Raceway, despite recording a pole at Daytona and leading 13 laps at Richmond.

The No. 88 car showed speed throughout the weekend, qualifying seventh on Friday, which was his best effort since the pole-winning run at Daytona. During the second practice of the weekend, Earnhardt was second on the scoring pylon only behind Kevin Harivck, before turning the 28th best time in final practice.

Overall, it was one of Earnhardt’s better races of the year, racing up to third during the first stage and earning four stage points in the second stage, but doesn’t think it was the best racecar of his farewell tour.

“I think we had a better car at Richmond and a better car at Texas, but this was in the top five I would imagine,
Earnhardt said of the car Greg Ives put under him. “We were really good Texas [Motor Speedway] and it felt like we were a good car. I think that was probably our best effort so far.”

The fifth-place effort at Texas was Earnhardt’s lone top-five finish of 2017 through 29 events. Despite not getting a top-10 finish over the last 12 events, the veteran driver believes Hendrick Motorsports has turned a bit of the corner it lacked earlier in the season.

“We’re picking up on some things that are helping our cars performance wise,” Earnhardt said. “I think the teams are sharing it really well to try and gain some speed. We’ve got to work together to try to get the performance where we need it to be and help this company win a championship. Everybody is sort of leaning on each other and using a lot of principals and trying a lot of things that seem to be helping each car and building on each other’s setups.”

In one word Earnhardt summed up the last 12 races as “terrible,” but hopes this gains momentum going into the last seven races of his Cup Series career.

“We’re trying some stuff – and if you look at our car and how we’ve ran, I know it’s kind of hard to see, but we ran really good at Darlington and we hit a home run at Richmond,” he said. “We were really, really good on the long runs and we brought some of those principals to Dover. I’m optimistic with our performance and we’ll see how it works out.

“It feels good. The guys are happy. The car is probably a little better than that at times. I surely would have liked to have gotten a top five. We’ll take it and build on that. We’re learning some things that have been better over the past four or five weeks and we’ll see how it goes.”

11 of Earnhardt’s 26 career Cup Series victories have come at tracks that make up the final seven races of the season. Most recently, the 14-time most popular driver won at Phoenix International Raceway in 2015.

Just got back from a great fishing weekend. This is newsworthy? Come on Dustin! Going to start planning next weekends trip.