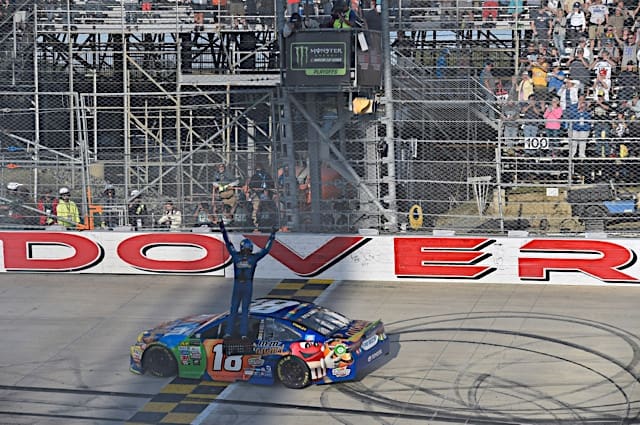 There’s a reason why you watch until the end.

It’s the very reason Chase Elliott was denied victory again Sunday at Dover International Speedway, as Kyle Busch passed the No. 24 driver with two laps to go to steal the win in the Apache Warrior 400.

Busch, who started second and fell back early, battled back to be Toyota’s top driver throughout the event before destroying a 4.5-second disadvantage to catch and pass Elliott for his 42nd career Monster Energy NASCAR Cup Series win.

“That was everything I had,” Busch said. “I got to the top, rim-riding and got by the No. 24. We definitely made a lot of gains on this car and got it a lot better. This was a hard-fought one. I knew Chase is hungry, he’s been trying a couple years to get his first Cup win. I saw that carrot out there and I was getting it.”

Elliott led the most laps of the afternoon, spending 138 out front. Despite the speed, Elliott “gave it away” on lap 399 of 400.

“I am just so disappointed in myself,” a dejected Elliott said. “I couldn’t have had it any easier; ran green from the stage break to the end and gave it away. My team kept me in the ball game, I didn’t.”

Behind Elliott was Jimmie Johnson, who scored his first top-five finish since Dover in the spring. The 11-time track winner was followed close by Hendrick Motorsports teammate Dale Earnhardt Jr., who grabbed his best finish since Sonoma in June.

Though these were positive runs for HMS, a majority of the attention drew toward its fourth driver of Kasey Kahne, as he fought for one of the final transfer spots to the Round of 12 that kicks off next weekend at Charlotte.

Unfortunately for Kahne, a 14th-place finish wasn’t enough to make his way through. Austin Dillon, Ryan Newman and Kurt Busch were also eliminated after 400 miles, with Newman offering the closest fight. He came up only two points short of 12th place.

“We weren’t good enough, simple as that,” Newman said. “We didn’t have what it took. You can’t run like we have the last three races and expect to go out and win a championship.”

Ricky Stenhouse Jr. was the man to deny the Phoenix winner the final transfer spot, scoring an all-important seven stage points in Stage 1 of the day after a perfectly timed caution kept him in the top five. The fourth-place result in stage was enough to eventually give the Roush Fenway racer the last spot in Round 2.

“We caught the caution at the right time and it paid off,” Stenhouse said. It was really the turning point of our day and it gave us a buffer. I felt a little bit of ease from that point. We’re reset now and we’ll give it all we got.”

Despite only five cautions on the day, the race saw strong competition, particularly up front where there were 15 lead changes among six drivers.

Jeffrey Earnhardt caused a red flag on lap 87 when he spun into the sand barrels while attempting a green-flag pit stop. It stood as the only on-track accident of the day.

Looks like Kyle won using his brain instead of his right foot. Scary!

This had to be a tough one for the HATERS. Kyle or the Anointed One!

He’s not the Anointed One until Johnson gets number 8. Should be at Homestead.