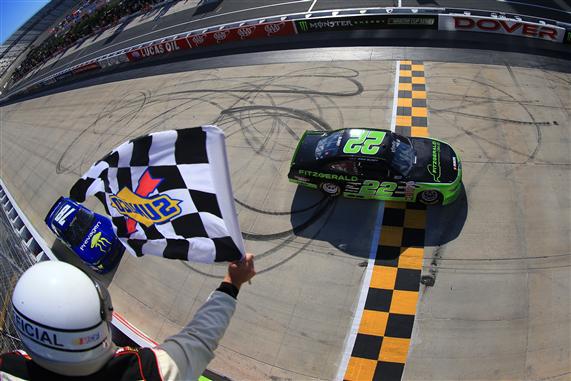 Monster Energy NASCAR Cup Series: Bittersweet Day for Hendrick Motorsports in Dover – In the end, the sweet side may outweigh the bitter Sunday at Dover International Speedway. But there was plenty of both as the four-car organization left the Delaware track.

Staring with the negatives, Kasey Kahne was one of the three bullets in the playoff gun for HMS, coming in with a win from the Brickyard 400. However, after finishes of 21st and 35th in the first two races of the playoffs, a 14th-place result at Dover was not enough to advance to the Round of 12.

The driver in his final eight races with the team will not end the partnership with a title.

Joining the sad side, Chase Elliott had his closest shot at the win win yet when he led by more than four seconds over Kyle Busch in the closing laps. However, that advantage was decimated by Busch, who eventually passed Elliott from the outside lane coming to the white flag. Elliott was no match and came home second after leading 138 circuits.

Though he enters the Round of 12 winless, momentum is potent as the rookie boasts a pair of second-place finishes in the last three races.

The final half of the team had its best results in months, starting with Dale Earnhardt Jr. in the seventh spot. Qualifying in the position, Earnhardt maintained a top-10 day, sneaking into the top five at times before settling for only his fifth top 10 of the year and first since Sonoma in June.

Jimmie Johnson also ended a long streak, scoring his first top-five finish in nearly four months when he came home third in his No. 48 Chevrolet.

Though the team leaves Dover with no win and one less playoff driver, a near-win for the No. 24 and potential return of a champion may pay off for the Round of 12. – Zach Catanzareti

XFINITY Series: Ryan Blaney Cruises to Victory at Dover, Makes New Fan – It took Ryan Blaney until the end of the opening stage to catch pole-sitter William Byron for the top spot. But once the second stage began, there was no looking back for the No. 22 team.

Blaney passed Byron on pit road and would go on to lead 136 of the final 140 laps of the race, en route to his second victory of the season. Though the race was a bit of a stinker, the young phenom made a new fan following the event.

The old-school driver did not do a post-race celebration, tearing up his racecar. He actually said he hates seeing other drivers do that. In the process, when taking the coveted checkered flag from the flag man, he granted it to a young Kyle Larson fan, and remember “Kids Drive NASCAR.”

While taking photos in Victory Lane, the young unnamed child and his family joined Blaney. It was a special moment, for one of the best up-and-coming drivers in the sport.

The series heads to Charlotte Motor Speedway for the cutoff race of Round 1 to the playoffs. Ryan Reed is on the bubble, two points ahead of Brendan Gaughan. Michael Annett has a fighting chance being seven markers off the pace, but Blake Koch and Jeremy Clements will likely need to win in order to advance to the Round of 8. – Dustin Albino

NHRA: Figure Eights – Top Fuel driver Steve Torrence and Funny Car pilot Ron Capps each notched their eighth win of the season at the AAA Insurance NHRA Midwest Nationals at Gateway Motorsports Park outside St. Louis, moving both a little closer to a potential championship with just three races left in the season.

Torrence faced off against Doug Kalitta in the finals and made a 3.684 second, 329.34 mph run to best Kalitta’s 3.698 seconds, 331.28 mph by a nose. He also got by Shawn Langdon, Leah Pritchett and Antron Brown in earlier rounds.

“We got here by doing what we do all year long and doing it ourselves,” Torrence said. “We went out and we just took those guys out and put them back in the trailer. We’re leaving here with a bigger points lead and a trophy.”

Torrence now holds a margin of 42 over second place Kalitta.

Capps faced rookie Funny Car driver Jonnie Lindberg in the final and made a run at 3.879 seconds, 331.53mph to beat Lindberg’s 3.904 seconds at 326.87 mph. Capps got by Jim Campbell, Jack Beckman and John Force on his way to the finals.

Pro Stock came down to a teammate battle between Greg Anderson and Jason Line. Give this one to Anderson with a 6.571 second, 210.73 mph pass to best Line’s 6.545 seconds at 211.26 mph. The win also gave Anderson the point lead in the class. He also beat Dave River, Larry Morgan and Brian Self before meeting up with Line in the finals.

Camping World Truck Series: Ben Rhodes Secures Spot in Round of 6 – With Talladega Superspeedway looming in just under two weeks, the only two drivers who can breathe easy headed into the cutoff race are Christopher Bell and Ben Rhodes, who scored his first career win Saturday night at Las Vegas Motor Speedway. With the type of carnage that a trip to Talladega brings, the other six drivers looking to remain in the championship battle will need to play it safe at the 2.66-mile tri-oval.

Currently, it’s Kaz Grala and John Hunter Nemechek on the outside looking in. Despite a pair of top-10 finishes in the first two races of the playoffs, Grala sits eight points behind Austin Cindric, who finds himself sixth after a fourth-place run at LVMS. Meanwhile, Nemechek suffered a rear gear failure at New Hampshire Motor Speedway that put him in a deep enough hole that an eighth-place run in Las Vegas couldn’t dig him out of. He’s currently 14 points behind Cindric.

But as we all know, at Talladega, anything can happen. In fact, the last five Truck Series race at Talladega have featured at least one Big One, including 2012 and ’13 where it happened on the final lap. Of course, we all remember what happened on the final lap at Daytona to open the season too. Despite the nerves, Talladega should be one heck of a race to watch, especially now that there are stage points that could make the difference between who moves on in the championship battle and who’s left to finish out the year racing only for the checkered flag. – Beth Lunkenheimer

Sports Cars: One GM Car Exits GT3, Another GM-based Car Enters? – Thursday was a big news day in the world of sports car racing.  Team Penske announced its intention to race this weekend at Road Atlanta, while Action Express Racing announced its 2018 driver lineup, which sees a couple of notable changes.

In addition, Cadillac announced its Pirelli World Challenge team will go into “hibernation,” effective immediately, which means that the championship-winning team will not be back on the grid for 2018 and beyond.  That ends a period of 13 non-consecutive years of competition in the series.

The Cadillac ATS-V.R., which is an FIA GT3 homologated car, will not be sold to customer teams.  As a result, the car that won this year’s Sprint-X GT Pro-Pro championship (with Michael Cooper and Jordan Taylor driving) will go dormant and sit in a warehouse somewhere.

However, with one GM GT3 car out, another may replace it.  DailySportsCar.com is reporting that Callaway Competition has gotten the OK from General Motors to race its Corvette C7 GT3/R in the United States in both Pirelli World Challenge GT and the IMSA WeatherTech SportsCar Championship’s GT Daytona class.

Previously, Callaway was banned from racing its car in North America due to General Motors not wanting multiple GT3 cars racing against each other.  Callaway Competition has previously indicated that if given the permission, it would build cars in the United States to sell to potential customers.  It appears that some more American V8 goodness could be coming to the states next year. – Phil Allaway

Formula 1: Verstappen Masterful in Malaysia – Max Verstappen celebrated his birthday weekend in style by cruising to the second win of his career amid what has been a difficult year.  Verstappen started the race in third but was assisted by Kimi Rakkonen’s failure to join the race.  Raikkonen had held the second spot with Lewis Hamilton on pole.  By the end of the third lap, Verstappen had passed Hamilton with surprising ease.

Hamilton finished the race in second with Verstappen’s Red Bull teammate Daniel Ricciardo earning the final spot on the podium.  Sebastian Vettel, who started the race from the last row, secured the drive of the day by crossing the line in his Ferrari in fourth.  The feel-good finish was spoiled a bit when he and Lance Stroll collided during the cool down lap, knocking Vettel’s left rear wheel from the car.

The race, the last to be held at Sepang International Circuit for the foreseeable future, showed why it is a wonderful track, with wide lanes that allow for and encourage both side-by-side racing and overtaking.  The often unpredictable weather remained calm, meaning a dry track throughout.

Our column, Slipstream Saturday, predicted that Verstappen might have a good day, a thought that turned out to be prophetic.  While even a podium finish would have been welcomed, the win should bring much-needed energy to what was starting to become a strained relationship with Red Bull.

Hamilton now leads Vettel by 34 points with four races to go.  The series resumes next week at Suzuka for the Japanese Grand Prix. – Huston Ladner