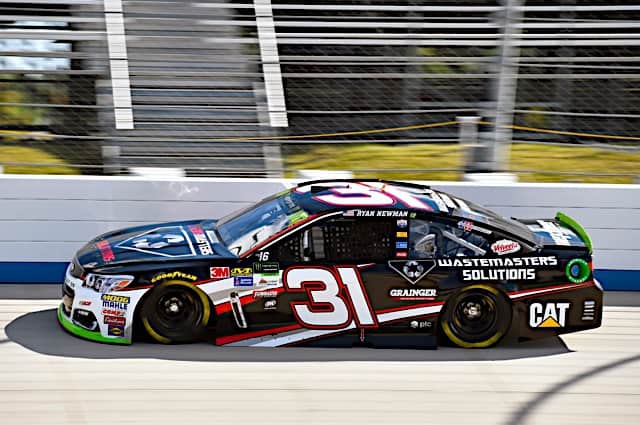 Entering Sunday’s cutoff race to the opening round of the 2017 Cup Series playoffs at Dover International Speedway, Ryan Newman entered with a one point deficit, behind Ricky Stenhouse Jr. and Richard Childress Racing teammate Austin Dillon. The No. 31 started the day ahead of his closest competition in eighth.

As soon as the green flag flew, Newman dropped outside the top 10. On lap 86, his day turned for the worse when Jeffrey Earnhardt spun coming onto pit road for a green flag pit stop, crashing into the sand barrels. Stenhouse had yet to pit, moving up to third.

Over the final 30 laps of the opening stage, Stenhouse remained in fourth, earning seven stage points. Heading into the second stage of the race, the No. 17 team was eight points ahead of the No. 31 car, as Newman finished 19th after the first 120 laps.

Over the course of the second stage Stenhouse dropped, as Newman’s team worked on the No. 31 machine. The next 120 lap segment went to Newman, but he didn’t earn any stage points finishing 16th, though remaining on the lead lap.

The final stage went caution free and Newman had little strategy to play after making it a habit of it all season long. Crew chief, Luke Lambert, called the No. 31 car to pit road before the majority of the field, giving him fresher tires to make up time. Stenhouse remained on the track, losing valuable track position.

As Newman fought to remain on the lead lap at the end of the 400-lap event, the No. 31 car finished 13th, six positions ahead of Stenhouse, two points behind the coveted 12th position.

“We weren’t good enough,” Newman said after the race. “It’s as simple as that. We just didn’t have what it took, and you can’t run where we run for the past three races and expect to run for a championship. We’ve got some work to do to build off for next year and we’ll do that.”

Over the three race opening round, Newman had a best outing of 13th at both New Hampshire Motor Speedway and Dover. Finishing 23rd at Chicagoland Speedway to kickoff the playoffs costed Newman valuable points.

“We didn’t have what it took and we proved it,” Newman said. “We got stuckered on the pit sequence there and the [No.] 17 got some points and that’s all it took.”

NASCAR brought a new tire compound to Dover this weekend, which Newman didn’t see as a determining factor. He feels RCR missed it as a whole as teammate Dillon finished 16th and Paul Menard came home 26th.

“The cars drove horribly for everybody here,” he added. “It was difficult to pass no matter what the tire we had in the first race or the second race. We didn’t do what we needed to do as a team and as an organization.”

Newman entered the playoffs as one of the hottest drivers in the sport, finishing in the top seven positions between Michigan International Speedway and Richmond Raceway (four races). Earning only five playoff points and having inconsistent runs throughout the regular season, the No. 31 team needed to have solid finishes in all three races of the opening round to advance.

It turns out a 16.3 average finish didn’t cut it in this year’s edition of the opening trio of events to the playoffs.