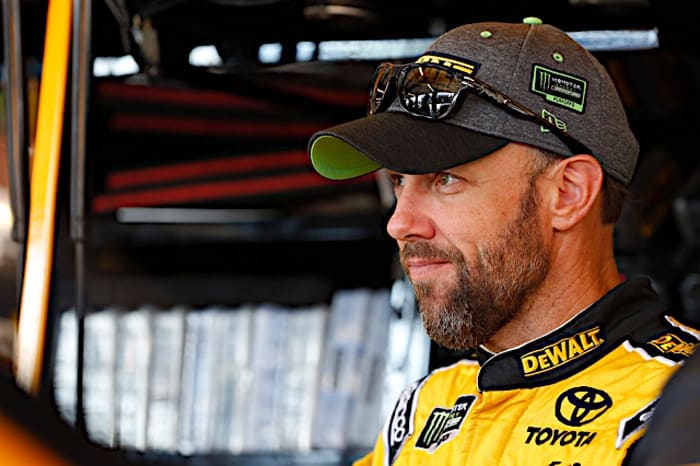 Sitting on the couch on Sunday night, with SportsCenter on mute in the background (the default channel in my house when I have the remote) I noticed the Dover race recap segment was on. So, I turned up the sound to listen to how ESPN portrayed the race as that’s always interesting. At that point, I hadn’t seen the whole Ryan Newman / Jeff Gordon “discussion” so that was another thing I wanted to watch. After the piece finished up came a card with the overall standings. The anchor tried gamely to explain the deal with playoff points and the reset and he ended up saying ah, Google it. And while it was likely somewhat tongue in cheek isn’t that a neat summary of this whole system? When we went to one point / one position on the track it was meant to make it easier. And it did, to be fair. But throw in playoff points, stage points, end of regular season points, points reset and segment carry over points and it all becomes something of a mystery. Now I’m no mathematician, a subject that started to stump me the moment algebra raised its ugly head, but there has to be a simpler way. I write about NASCAR and I’m confused how it all shakes out. How is that going to play for the casual fan. Not well, I’d say.

After an underwhelming first stage with three pretty dull races, unless you’re a fan of the No. 18, we head into segment two which to the best of my knowledge no longer has a moniker like “Challenger round” or something. Ahead of us we have two bread and butter cookie cutter tracks and one huge high banked wild card ahead of us in Charlotte Motor Speedway, Talladega Superspeedway and Kansas Speedway. And given the way most mile-and-a-halves have gone this year there isn’t a great deal of hope for the first and last races of this segment. So, there’s a whole deal of expectation for what might transpire in Alabama. Could Junior get another victory or might Ricky Stenhouse Jr. continue to show his restrictor plate prowess? Or could someone like Joey Logano grab the checkers and at least have some kind of a positive end to what has been a difficult season? I, for one, am glad that this race is the second of the three this year as it gives playoff drivers the chance to recover from a wreck not of their own making but at least it’s a date to circle in the calendar to look forward to. There’s not been much of that in the playoffs thus far. Hopefully I’m proved very wrong in the next few weeks but I won’t be holding my breath.

THREE: Next up, Charlotte

This weekend we head to NASCAR’s home town and the one-and-a-half-mile quad oval Charlotte Motor Speedway. This will be Cup race number 117 at the circuit, a streak that runs all the way back to 1960 – some 57 years. The inaugural race was won by Joe Lee Johnson; one of the two races he won in his 55-race, 7-year top echelon career. This Sunday’s 500-miler will be the last playoff race at the venue with this regular format as next year we make the switch to the “ROVAL” or road course if you prefer. The new configuration is a 13-turn, 2.4-mile road course incorporating the infield and all but 400 feet of the 1.5-mile “regular” track. Drivers will compete over 130 laps or 500 kilometers, making the second phase of the playoffs a completely different proposition in 2018. For many years a good number of fans have been pleading to include a road course in the playoffs and next year they’ll get their wish. Part of me wonders why the two existing courses – Watkins Glen and Sonoma Raceway — weren’t considered but I also get that if we’re going to go road racing in the playoffs three road course races across a 36-race schedule makes more sense. Either way, this race is one to circle in the 2018 calendar.

It’s interesting to note that the three winless drivers who made the playoffs, Matt Kenseth, Chase Elliott and good old Jamie McMurray, all move on. On the flipside of that, four winners exit the playoffs. Specifically, that’s Daytona 500 winner Kurt Busch, Coke 600 winner, Austin Dillon and Brickyard 400 winner Kasey Kahne. Oh, and Ryan Newman who won the first Phoenix race. All year long we’ve heard talk about win and you’re in but here we are, headed into the second stage, and three drivers who didn’t manage to win are progressing while four drivers who did win are out. Now what does this mean in the grand scheme of things? Probably not a great deal but it’s a good side note nonetheless.

Finally this week, it has long been a wish of mine to give either the invocation or the command at a NASCAR race and while I realize it’s the longest of long shots hope always springs eternal. So wasn’t it great to see Wyclef Jean offer up a quite brilliant command to start engines. If you’ve not seen it, take a look for yourself….

Now that, ladies and gentlemen, is how you do it. And if I ever get the chance, I have a standard to beat!

“All year long we’ve heard talk about win and you’re in but here we are, headed into the second stage, and three drivers who didn’t manage to win are progressing while four drivers who did win are out.”

Like I’ve been sayng since Brian’s brilliant chase idea, a driver doesn’t have to win races to win a POINTS championship. But Captain Oblivious won’t admit it.

I think it shows just how stupid it is to allow someone who pulls a win out of their ass but usually is lucky just to break the top 15 barrier to pretend they have a shot at the championship. The guys who weren’t lucky enough to win but made it in on points usually have a bunch of top tens (which is more indicative of someone who is championship worthy, well, at least relatively).

TV ratings are down for the first three races of the playoffs. They lost 500,000 viewers for the Dover race alone. That’s a lot of folks. The Chase and then the playoffs were to increase fan interest and have done exactly the opposite.

Could it be that rather than the Chase people know that the race will be most likely be boring, so why watch?
After all there are other alternatives.

I feel the ratings are down due to too many races on NBCSN…. The NBC booth is the worst i’ve EVER heard… The truck phones in the production of the race…. NBC flat out sucks. FOX keeps it fresh. These ratings are getting even lower on NBC I called it last year… No one wants to watch/listen to Rick Allen simple