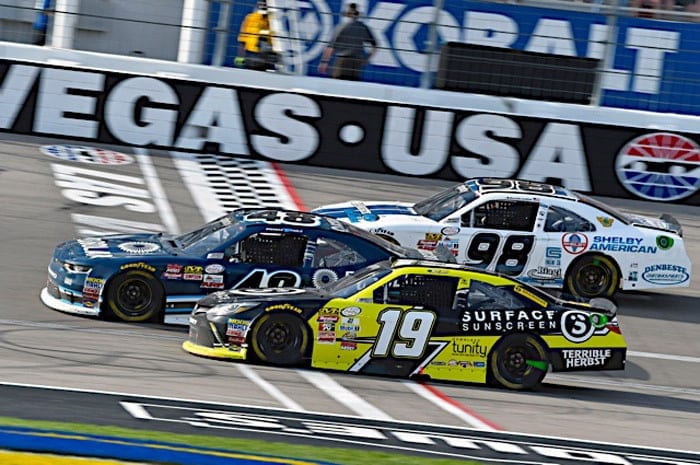 At 10:00 pm/UTC, Jason Aldean took to the stage to headline the Route 91 Harvest Music Festival in Las Vegas. Within the next 10 to 15 minutes, concert goers were fleeing the scene as bullets filled the air. Those bullets came from the 32nd floor of the Mandalay Bay Resort and Casino, turning the outdoor music event into a trauma center.

Two hours later, A SWAT unit blew the door of the hotel room but by then, they were too late as the shooter had killed himself. The LVMPD revealed on Twitter that the shooter was dead at 11:58 pm/UTC. Once the smoke cleared, at least 59 people are dead and 527 injured in the deadliest mass shooting in modern U.S. history. We all at Frontstretch send out our deepest condolences and prayers for those affected by the shootings.

The NASCAR community, of course, flocked to social media to send out messages of concern, prayers, and condolences.

Our thoughts are with those affected by the tragic shooting in Las Vegas, and we keep all those impacted in our hearts.

We are heartbroken by last night's tragedy in the city we love. Our thoughts & prayers are w/ the victims, their families & first responders pic.twitter.com/D4teUv3ziD

Absolutely heartbroken to wake up to this. Praying for my hometown & those affected by this atrocity. Stay strong LV. I love you.

Devastated to hear of the senseless tragedy in my hometown. My thoughts and prayers are with all of you. ?? #prayforvegas

Just left vegas yesterday. This is a crazy world we live in. Stay safe everyone and prayers to the ones involved. #702

Make today and everyday count. Be the best that you can be.

Heartbroken to hear about what happened in my home today. Big thank you to all 1st responders Hope everyones ❤️’d ones are safe #BattleBorn

I don't even know what to say, this is all I know, this is my home. #PrayersForLasVegas always #702strong

In disbelief over Vegas shooting. My heart and thoughts are with the injured and the families who are dealing with unimaginable loss.

Brad @Keselowski​ Racing is thinking about Las Vegas. We are ? that the bright city we just left is now shrouded in sadness and tragedy. pic.twitter.com/x2wzWY6TWm

Praying for everyone in Las Vegas

Just pulled out of the @southpointlv parking lot and headed home with heavy hearts. Was humbling to see the city unify today in prayer ?? pic.twitter.com/aK8g474xW4

Only person who can address all evil in the world is God. Society needs to invite him back in schools, workplace, and everyday lives. #pray

Praying for everyone and their families out in Vegas! Terribly sad to think anyone could ever do something like this. #prayforvegas

JUST A VERY SMALL SAMPLE of those in the NASCAR community who care. Sad really.

It was a typical Chicago weekend and it doesn’t register anymore.

…AND BECAUSE OBAMA’s corrupt buddy “THE GODFATHER”, insists nothing is wrong, nothing to see move along. Insanity rules. IMO. Oh a whole host of other reasons too. I am sure smart people can figure it out…..