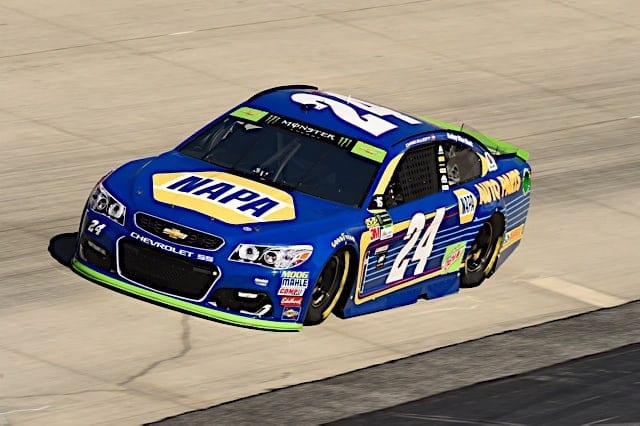 Just when it looked like Dover might produce something historic, like a young driver’s first win, Miles The Monster let someone else ruin the fun on Sunday.

It was Kyle Busch who pulled an epic robbery, passing Chase Elliott . Well, “ruin” might be a strong word as Busch was just doing his job of trying to win races. But who knows? Maybe what Busch did is a sign of a different type of history. Busch won his second straight event and is certainly capable of racking up two, three, maybe four in a row.

Kyle Busch did what great drivers do when they can smell a win in the closing laps of a race. He put it all on the line and went for it. There was no thought of just backing off and taking a nice comfortable second place finish to head into the second round of the playoffs. If we’ve learned anything about Busch is that he wants his opponents to be anything but comfortable when they see him coming in the rear view mirror. For those of us lucky enough to attend the race, it was apparent in the closing laps, that once Busch started closing ground, he was in the “driving the wheels off” mode. And yes, it would be very much a surprise if he’s not one of the four driving for the title at Homestead in November. And Sunday was a reminder, even if he looks like he might be out of the title chase, to never ever count him out.

And speaking of a chase, there’s the matter of Chase Elliott still not being able to close out a race which he was capable of winning. Let’s remember that Elliott is still young and figuring this Cup racing thing out a bit. But if he learned anything from Sunday’s experience, it’s that no one will, nor should they, give you anything at the sport’s top level. That means if Ryan Newman is fighting to stay on the lead lap, you don’t back off and hope he lets you past. You pressure him until he has no choice but to let you by. Don’t you think Busch would have done that? We all know the answer is a definite yes. And you can’t blame Newman for wanting to stay on the lead lap. If there is a late caution and he is on to the lead lap, he would be in position to make a couple of passes to gain the extra points he so desperately needed to reach the second round. And as for Busch closing in on the final laps, there is none, nor should there be, any sentimentality in letting Elliott get his first win. It’s all about winning at this level and Busch, and Elliott, too, each know how difficult wins are to come by. They don’t get handed to you. You’ve to earn them. Elliott will get this share of them, it’s just a shame for him and his fans he’s been close a handful of times only to come up empty.

While you don’t get handed wins in NASCAR, sometimes you do get handed a bit of good luck. That was the case for playoff-bubble-sitting Ricky Stenhouse Jr. on Sunday. When the first caution of the day came out, Stenhouse found himself as one of five cars who had not pitted and therefore, on the lead lap. That set him up for the rest of the day to go on and finish 19th. While not a great finish, it was enough to get him through to the second round. And that’s a big deal now because Stenhouse has emerged as the latest restrictor plate ace and Talladega is the second race of the second round. So, if he can pull off a third restrictor plate win this year, he would all of a sudden be in the final eight. Sometimes it’s not about being good all the time, but being good at the right time. That may be the case for the No. 17 team in the second round.

Since Dover is close to home, it will always be a track for me to go to. So this part of Sunday’s experience won’t stop me from coming, but it did make the day less enjoyable. With this being the digital age, you would think sitting high up in the stands would allow for good phone service and the ability to look at the live race stats regularly. But that was not the case (at least in turn 4) at Dover Sunday. So that limited the ability to get the updated current race standings and also explanations on scoring decisions, such as how did Ryan Blaney end up two laps down when everyone else around him was one lap down after that first caution. It was a great mystery that was not able to be answered during the race. The solution to that problem and others were not easily accessible due to the lack of poor cell service. And then, to add to the frustration, the scoring pylon, while giving the top 15 in the running order, did not continually rotate which cars were in the following positions as hasbeen done in the past. At one point, I had to text a friend to ask who was the first car a lap down? Let’s hope this is an issue that is solved at Dover, and other tracks, too, probably, in the near future.

One of the best things about going to NASCAR races is the fans. They are like no other in any other sport and I’ve been to all kinds of sporting events over the years. While strolling from the car to the track on Sunday, I couldn’t help but notice the variety of license plates for those in attendance. Sure, there were plenty of Delaware, New Jersey and Pennsylvania plates, but there were also plates from Ontario, Canada; Ohio, Connecticut, Massachusetts and New York to name a few. The point here is that while NASCAR attendance is not in its hey day of the late 1990s and 2000s, there are still faithful fans out there who will travel to see the sport. Good for them, and let’s hope NASCAR continues to work on giving fans a reason to go to the races.

One part of the sport that NASCAR needs to work on is making what happened Sunday, with Busch making a late pass for the lead, become more possible, rather than a rarity. For instance, when race leader Kyle Larson had a battery issue during a yellow flag, and dropped back to sixth, his chances of winning were over. Larson never contended for the lead again the rest of the day. What would have made the day more entertaining is seeing Larson work his way through the field and have a chance to win, too, in those final laps. But far too often, track position plays a more important role in who wins a race. If a driver makes a mistake or the car has an issue, and you have one of the fastest cars on the track, you should be able drive back through the field and contend for the win. But that’s far too rare of a scene in the NASCAR Cup series these days.

Charlotte is the first track for the next round of the playoffs and once again we are left with the question of whether anyone can beat Kyle Busch or Martin Truex Jr., who had an “off day” and finished fourth Sunday. How many drivers would wish for such an off day? But I’m going to say Busch keeps the streak going and makes it three straight. As for the underdog you might not think of pick this week, let’s go with the ever improving Clint Bowyer. He had a nice run at Dover with a sixth place finish, and if he had made the playoffs, would be moving to the next round. Since he didn’t, you know he would love to get owner Tony Stewart a win.

I was also at the race on Sunday. The reception between the start finish line and turn 4 was equally poor. I have been in the stands many times at Dover and never experienced WIFI that poor. Can you say “Sprint Cup”? All I was trying to do was look up a scanner frequency. Nope! The scoring pylon was a mess.

However to be able to watch a race, know what is going on in the race (for the most part) because I can see the race and not have “playoffs” and “points as of now” shoved down my throat….worth the inconvenience.

This year we drove in from Central New York. Met a local woman left behind in the parking lot without a ticket. So we gave her one of our extra tickets. Her family was quite surprised when she showed up in the stands.

Good times had by all!