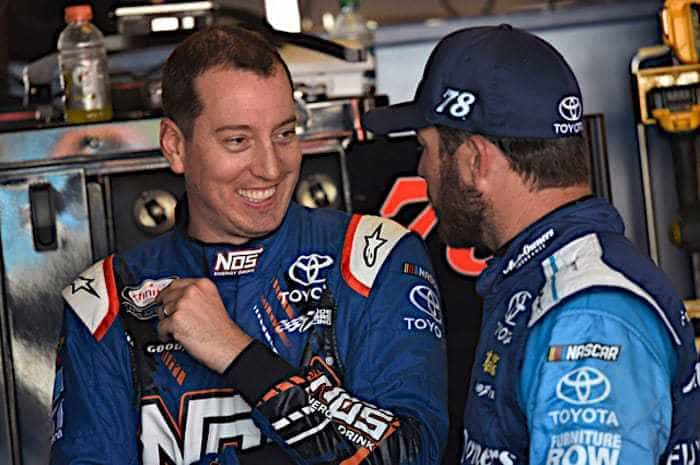 Did You Notice?… It’s been a difficult, controversial start to the Monster Energy NASCAR Cup Series playoffs. In the last three weeks, we’ve seen a 25-point penalty by a potential title contender (Chase Elliott). There’s been controversy surrounding the national anthem, forcing NASCAR PR to take a stance. Toyota has been dominating races, leading 299 of 300 laps at New Hampshire Motor Speedway.

Robert Yates’ death was the latest example of a difficult few weeks. Ratings are once again down roughly 15 percent as the sport tries to find any positive momentum upon which to grab.

But insiders within the sport feel all is not lost. People feel the ratings will stabilize down the stretch; Dale Earnhardt Jr.‘s final race at Talladega Superspeedway could see an increase. Plus, as the playoff field trims down, the championship battle will start heating up. There may be only three to six true contenders, but those teams remain close in speed.

Here are seven storylines I’m focused on as NASCAR finishes its stretch run of 2017.

1) Earnhardt’s Swan Song. Earnhardt, despite a difficult season, remains as influential off the track as he does on it. His tweets surrounding the national anthem controversy, quoting John F. Kennedy and Martin Luther King Jr., kept the sport balanced at a delicate time. NASCAR, by the way, deserves credit for how this weekend at Dover International Speedway was handled; the sport appears to have moved forward and dodged a bullet.

What was exciting about Sunday is the No. 88 team seems to be showing signs of life. Hendrick Motorsports is a step behind the Toyotas, but its equipment is once again pounding out top-10 performances. A seventh for Earnhardt was his best run in three months, and solid tracks are coming up. Remember, this team nearly won Phoenix International Raceway last year with Alex Bowman, and Earnhardt’s best finish this season came at Texas Motor Speedway (fifth).

And then… Talladega. The media center is at capacity with the stampede of writers covering Earnhardt’s final restrictor plate race. Expect a raucous crowd and a memorable performance from the sport’s most popular driver.

2) Could Chase Elliott Still Steal the Spotlight? Elliott’s sophomore year has been defined by the words “so close.” Rivals like Ryan Blaney starred during the regular season, visits to Victory Lane raising their profile. Even rookies like Erik Jones had been flashing better speed more consistently than Elliott’s No. 24.

But the son of 1988 champion Bill Elliott seems to have righted the ship. No one outside the Toyota duo of Kyle Busch and Martin Truex Jr. led more laps (180) during the first round of the playoffs.

The 25-point penalty for messing with the spoiler was difficult to swallow, as was giving away the race at Dover to Busch. But this team is the future of HMS, and many feel Elliott is the sport’s next most popular driver. Charlotte looms large Sunday, the site of Jeff Gordon’s first Cup Series victory in 1994. There’s still time for Elliott to steal the spotlight from the other young guns of 2017.

3) Can NASCAR Court a New Manufacturer? The sport has made no secret in recent years that it’d like to expand its base of manufacturer support. Dodge, Honda, even Nissan have been in the rumor mill on and off for years.

It’s notable that mid-October of 1999 was when Dodge announced its return to the Cup Series for 2001. Could we see a similar trajectory for 2019? Dodge has reappeared in garage buzz after a series of summer reports seemed to snuff out anyone entering NASCAR in the near future.

Whether it’s Dodge or someone else, snagging one could staunch NASCAR’s bleeding in an instant, more than any Fortune 500 company. It’s a sign to sponsors, stakeholders and fans that someone believes in the sport’s long-term vision. Stories like Subway bailing get pushed aside, and the narrative turns into millions that could be poured into the sport.

4) Tackling the Truck Series. There’s no question the Camping World Truck Series is on life support. Only two dozen of the entries at Las Vegas Motor Speedway last weekend attempted to run the full race. Of those 24? Two teams (Brad Keselowski Racing) will be folding in November, while a third, NEMCO Motorsports, needs its start-and-park entry to stay financially solvent through Homestead-Miami Speedway.

Heading into 2018, just three multi-car teams — GMS Racing, ThorSport Racing and Kyle Busch Motorsports — remain positioned to compete. Ford will be without a team in the series, and even if it picks one, which owner is left to align with?

But the Truck Series is also a place where NASCAR can experiment from the ground up. You know that spending cap some have been talking about? There’s no better place to start. Considering KBM is open about its losses, Thorsport had a devastating fire in 2016 and GMS turned down Cup to keep slow-building its operation, the idea should meet minimal resistance.

The market correction also provides an opening to attract new owners on the cheap. The sport should be talking to owners like MDM Motorsports, whose No. 99 ran part-time and won this year at Michigan International Speedway, as to how it can make them a mainstay in Trucks.

5) The Future of Danica Patrick and Matt Kenseth. Silly Season has wound down with chairs not in place for two of the sport’s most important drivers.

Sitting in one corner is Patrick, letting her business people drive sponsorship conversations for 2018. She’s run respectable as of late, three straight 18th-place runs raising the average finish to 22.9. That’s just a tick off last year’s career high of 22.0. The 35-year-old Patrick will argue she’s still a value to sponsors and still has a few years left in the tank. Her evolving businesses could also find their way onto the hood of a new team.

Kenseth, meanwhile, could win the championship and not have a ride. The 45-year-old has been a victim of a changing climate where corporate backing, not on-track performance, determines your future. It’s a hard reality NASCAR desperately wants to mask. For too long, it sat on the sidelines and hoped the veteran could be simply a one-year stopgap for someone.

But the closure of the No. 77 team at Furniture Row Racing appeared to close that door. Kenseth still may have an option at Richard Childress Racing; there’s an opening for its currently unsponsored third team. Other than that? Options with underfunded teams are so underwhelming you’d doubt this 2003 Cup champion would continue to race. Will NASCAR allow that type of sponsorship-driven decision to take place?

6) The Bubba Wallace-Richard Petty Saga. Petty’s been in the news for all the wrong reasons as of late. Biting comments toward departing backer Smithfield were followed up by threatening to fire employees who knelt for the national anthem. It’s not exactly the picture perfect image to sell to potential sponsors.

But NASCAR still believes it can somehow find a way to make a marriage between Petty and African-American driver Darrell Wallace Jr. work. Stakeholders understand that losing Earnhardt, Patrick and the iconic No. 43 in one year would be a titanic blow. To have Wallace on the sidelines as the sport champions its Drive for Diversity effort would be laughable.

That makes Petty a must-have on the grid for February’s Daytona 500. How the sport finds a way to keep it afloat, regardless of circumstances, could serve as a template for future scenarios. It’s a good lead-in to discussions on charter and franchising almost certain to occur during the offseason as owners look to maximize the value on a system generating mixed reviews.

7) Truex vs. Busch. Busch vs. Truex. It seems inevitable at this point the championship will be decided between this duo. Kyle Larson, Elliott, Kevin Harvick and perhaps Jimmie Johnson have made their cases for Homestead, too. But the way this Truex-Busch duo has run head-and-shoulders above the Cup field reminds me of the Johnson-Gordon title battle in 2007.

Right now, it seems Busch has the edge, while Truex has steered through bad luck. (see: Richmond Raceway caution, New Hampshire Motor Speedway wreck). But the No. 78 team has been building toward this crescendo for much of the past three years. It’s hard to discount it as a team of destiny.

One huge caveat for Truex, though: he has yet to win at Martinsville Speedway, Texas and Phoenix. Those three tracks in the Round of 8 could easily go to Denny Hamlin, Johnson and Harvick based on past history. That win-and-you’re-in aspect of the playoffs could suddenly leave Truex-Busch fighting for the final Homestead spot on points, which would be a shame considering their dominant seasons.

Will it happen? Truex has been a first-time winner so much the last two years at tracks at which he once struggled. But it’s a stat worth watching.

Unless I am misreading it, that next to last bullet is wrong. You left out the 3rd winless driver Chase Elliott.

With the rumored purchase of Fiat Chrysler by Hyundai perhaps there is a chance another manufacturer may enter nascar. However the rumors are also out there that two of the three manufacturers. The ones whose name doesn’t start with a T may be getting a bit antsy. We shall see.

As far as ratings go they appear to have already stabilized. You have to go back to Watkins Glen to find one that was a 2.0. But maybe the miracle is right around the corner. We shall see.

Dodge has already stated this year that they are NOT coming back to NASCAR. Enough about Dodge. We need a new manufacturer.

Spending caps won’t work. I believe the spending caps for other sports only relate player salaries. That is something that can easily be verified. Is NASCAR really going to try to audit every team’s books, for all expenses? Even if they could enforce it, the cap would only reinforce the need for mega teams & multi team alliances which in my opinion are one of the root causes of the terrible, nonaggressive racing.

They should send the trucks to the southeastern short tracks like they used to with the Busch Series. Send them to South Boston, Hickory, Myrtle Beach, etc. Maybe they could reconnect with the old fan base. Travel would be less. Going to those short tracks should be a smaller learning curve for new owners than going to Las Vegas or Texas.

Going back to their roots might not help, but what they are doing now doesn’t seem to be working. However, I doubt that NASCAR’s leadership has the will to make real changes.