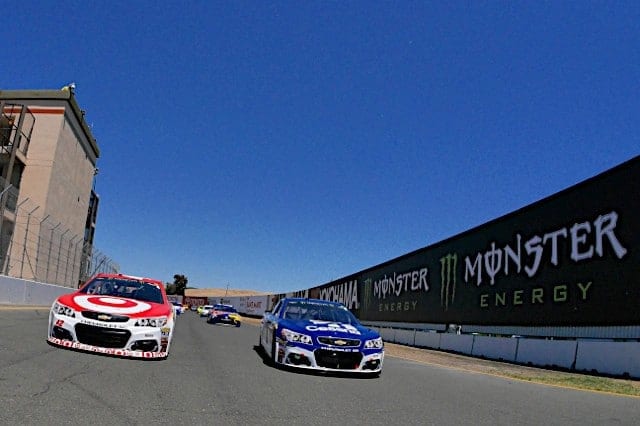 Over the past 20 years, we’ve seen nothing short of a safety revolution when it comes to run-off at racetracks and wall technology.  In 1997, the only soft walls that you heard about were the styrofoam blocks in use at places such as the late Flemington Speedway in New Jersey.  Later on, Watkins Glen International added them to replace tire walls.

More recently, paved runoff has been introduced to many road courses, much to the chagrin of race officials.  On ovals, softer wall solutions beyond styrofoam have been used, starting with energy-absorbent blocks at Indianapolis Motor Speedway in 1998 and followed by the SAFER barrier.  As a result, major racetracks are quite a bit safer today than they were 20 years ago.

Sonoma Raceway in California seems to have gone the opposite direction.  As tracks have gotten away from concrete, Sonoma has added the hard blocks.  If anything, having concrete walls gives some kind of finality to the layout of the grounds.  Back in the mid-1990s, the track, then called Sears Point Raceway, had piles of tires strewn around the course in certain areas.  In 1994, Lake Speed found the pile of tires in Turn 6.

Looking at that clip, you’ll notice that the bridge supports weren’t protected all that well.  If that bridge were still there, it would be concerning.  Sonoma has since removed that bridge.

The piles-of-tires as a barrier theory didn’t always work.  Less than 10 laps later, Derrike Cope and John Krebs locked wheels and infamously plowed through the tires at Turn 5, resulting in Krebs flipping his Chevrolet.

In the same video, there are tires up against the outside wall all through the exit of Turn 10.  Today, the tires there are banded up so they don’t fly all over.  However, there were nowhere near as many there this year.  That’s how you end up with incidents like the one Chase Elliott had in Monster Energy NASCAR Cup Series practice back in June.

September’s round No. 18 for Pirelli World Challenge’s GTS and GTSA classes brought the issue back into focus.  The 50-minute race (cut to 41 due to a red flag) featured two crashes into unprotected concrete walls.  Granted, these walls weren’t completely anchored to the ground, but they are still solid hits.

First, Racers Edge Motorsports’ Bob Michaelian spun into the wall exiting Turn 11 after Frank Gannett basically drove himself across Michaelian’s nose.  By all indication, Gannett had no clue Michaelian was there.

Michaelian walked away from the crash with some assistance, but that was a driver’s side hit on concrete.  By today’s standards, that is pretty much unacceptable. The SIN was no longer in after that crash.

For wall solutions, Sonoma often uses non-permanent concrete blocks, similar to what you would see at a street course.  Sonoma is not Long Beach, but the shortened INDYCAR version of Turn 11 (slightly lengthened for this year) cuts through the middle of what is normally the pits for the dragstrip, hence the temporary barriers.

The race was ultimately red-flagged and declared complete early after another huge wreck.  Derek DeBoer and Tony Gaples collided in the esses while racing for the GTSA lead.  The result was this nasty crash.

Yet another driver’s side hit onto an unprotected concrete wall.  Like the Michaelian crash, the wall moved (or, in this case, fell over) because it wasn’t permanently anchored to the ground.  However, Gaples took the brunt of a nasty hit.  The Chevrolet Camaro GT4.R is a great racecar, but no car is designed to crash driver’s side first into a concrete wall.

Gaples walked away with assistance and was checked at the infield care center.  Officials advised Gaples to make a trip to Santa Rosa Memorial Hospital for a quick checkup.  After a quick in and out there, Gaples sampled some In-N-Out before going to the Pirelli World Challenge banquet.

Regardless of his clean bill of health, Gaples was one sore puppy later that evening.

“That was a big impact, probably the hardest I’ve ever had in racing,” Gaples said at the banquet.  “Fortunately, none of my injuries were serious – just a lot of soreness and bruises. It could have been worse but you see how strong of a car the Camaro GT4.R is. It was a lot to go through for my first win. Hopefully the second comes a little easier…”

Yeah, you read that right.  Since the race was declared complete after Gaples’ crash, a countback scenario occurred in which the results were compiled from the last completed lap before the red flag.  As Gaples was still leading GTSA at that point, he was credited with the win.

In this area of added emphasis on injuries and the idea that no one should be able to hit a concrete wall on an oval, it seems rather ridiculous to have the sheer expanse of unprotected concrete Sonoma currently has.  In NASCAR, Jeff Gordon always seemed to be the one driver to find bare concrete.  Las Vegas Motor Speedway in 2008 and Atlanta Motor Speedway in 2015 were good examples of that bad luck.

However, with Sonoma’s current setup, anyone could slide off-course and end up meeting the concrete at relatively high speeds.   The track needs to take steps to rectify these issues.

Does Sonoma Raceway need a bunch of paved runoff? No.  The track just needs to protect its walls better.  There is no excuse for having less of the concrete wall protected by tires at Turn 10 today than in 1994.

Today, NASCAR pays close attention to safety issues and is buttressed by the relatively recent creation of the drivers council.  Last June, the wall situation seemed suspect.  However, it seems like it will only continue at Sonoma.  Pressure needs to be put on Sonoma Raceway to make improvements, and NASCAR shouldn’t be alone here;  INDYCAR, Pirelli World Challenge and other sanctioning bodies should also participate.

This article is by no means designed to be a takedown of Sonoma, but drivers should be able to race to the best of their abilities without something stupid happening.

Flemington was a great track both when it was dirt and after it was paved. It’s a shame that the facility wasn’t maintained and eventually closed. Once it was closed the township deemed that racing never happen again and now it is shopping and residential. I had great memories there as it was the first race track I ever attended as a kid.

Tom B
Reply to  Mack

Wasn’t that the track Toby Tobias won a lot of races? Remembering the great ones, gone but not forgotten.