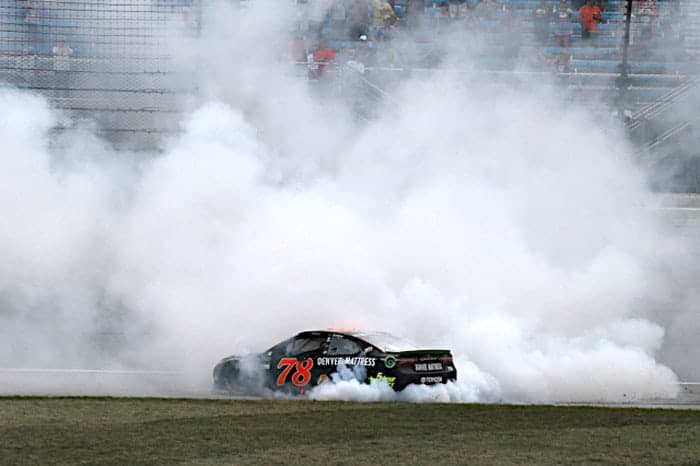 With all the crazy goings on in the world we all need a few moments to get happy.  While this column is more than willing to acknowledge the intersection between sport and politics and believes that they are exorbitantly linked, that does not belie the fact that sport also acts as a place for community and catharsis.  Keeping this week simple and focusing on the brighter side.

Happiness Is…Steamrolling.  Much has been made of the power differential that Toyota has compared to its counterparts in the Cup series.  Some pundits have questioned how Toyota has gotten so much better than everyone else and believe that NASCAR may be playing favorites.  (One response to that is: Wasn’t Hendrick Motorsports the preferred team of NASCAR?  When did things change?  Was there an email or tweet?)  The example cited is that Ford, specifically Penske, got rapped for a penalty this year and hasn’t been the same since.

Ok, sure, could be argued.  That notion ignores the fact that Toyota was garbage to start the year or that the company may have spent more man hours improving their product or that perhaps they have more talent behind the wheel.  This contemplation, however, is missing out on a key component.

The teams driving Toyotas still have to go out and perform, from the drivers to the crew chiefs to the pit crews.  All it takes are simple mistakes and speed no longer matters – as seen when Kyle Busch botched his race at Chicago to start off the playoffs, taking him from contending for a win to racing for a lucky dog pass.

Execution is still at the heart of the matter, and the Toyota teams are not only fast but they’re best are executing.  Martin Truex Jr. and KyBu are getting the yips out and now just taking over.  They’re showing strength as the juggernauts they are favored to be, with Kyle Larson seemingly following in their wake.  As for the other teams in the playoffs…they don’t seem like they’ve brought anything new to the fold, and that includes strategy.  Right now the favorites are having their way, which makes for interesting entertainment, and it doesn’t matter from what perspective, because it’s compelling.

Happiness Is…F1.  The big news surrounding the series, from the American perspective is that ESPN will be taking over F1 broadcasts for 2018.  This change comes as a bit of a shock as NBC/NBCSN seemed to have carved out a pleasant niche with the sport and had begun to establish themselves as a de facto Speed channel.  With the usual crew of Leigh Diffey, David Hobbs, Steve Matchett, and Will Buxton covering from the pits, the group had an enjoyable, friendly feel to them that may be one of the best racing broadcast teams out there.

So in some ways, this comment is a bittersweet happiness.  As the move has been announced, ESPN noted that they will be using the world feed for their broadcasts.  Some have taken that statement to mean that ESPN will be using the footage that F1 produces rather than sending their own production crew.  It should, however, not be read like that.  The sport does not allow for anyone to craft their own broadcasts.  Since 2007, the series has been the one supplying the footage through Formula One Management, and that will not be changing.

Instead, Marshall Pruett brought some light to the matter:

Per a contact at ESPN, its 2018 F1 broadcasts will use the commentators and pit reporters supplied by F1 on the world feed. https://t.co/yXz1jSId2D

It looks like fans of the NBC crew are out of luck.  This aspect of the ESPN deal is rather disappointing but it points to a few things.  To start, ESPN apparently has the money to buy the rights but does not intend to spend the money to make the broadcast uniquely their own.  For some motorsport fans, that is fantastic news.  The second positive to be gleaned is that NBC/NBCSN has laid in place the foundation for the sport’s upswing in the U.S., meaning that ESPN snatched up the product because it’s become valuable.  They have followed on that premise by announcing that alongside races and qualifying they’d be airing all practices, something that is not the case currently.

Liberty Media, the new owners of F1 surely see the partnership with ESPN as the best way to grow the much-desired American market.  With ESPN’s reach and their commitment to showing all on-track action of the sport the match seems like a positive one going forward.  The pairing may have come as a bit of a surprise but the relationship between F1 and ESPN makes all the (dollars) and sense in the world.

Happiness Is…Intensity. It is time to start enjoying the pressure crunch.  In the Cup series, four cars have been eliminated and there are now seven races to go.  While it seems like Larson, Truex, and Busch are a lock to be in the championship race at Homestead, there is still one spot remaining.  The points the first three have accumulated makes them difficult to knock out, so the story now shifts to who will emerge from the morass of the others.

In F1, Lewis Hamilton is starting to drive away from Sebastian Vettel, but all it takes is one DNF and the whole story switches back to a tight battle between the two, and Mercedes and Ferrari.  With four races to go, the leaders are facing the same increased pressure as their American counterparts.  Now is the time when pressure is supposed to form the best racing.  Let’s hope that is the case.

Yeah, yeah that is it! Marty TRUEX look up his record! 14 and a half years in CUP. HE SUCKED for 12 of them and last year and this with almost 15 years in CUP he suddenly becomes a SUPERSTAR? Really look it up, he was bad, very bad. Now all of a sudden this old man last year and this has had a transformation of skill and brilliance and finally finds his groove in CUP? Like he is the next superstar? Are you kidding? Nope, not buying it, not at all. Something strange is afoot at the TOYOYTA CIRCLE K, and it is NOT Marty’s brilliance behind the wheel. His lengthy time in Cup with a many record breaking winless records tells me otherwise.

The man has ruined the sport for many. He can’t see it. Will not see it. EVER.

Some people can’t see with their eyes open.

Intensity may have ratcheted up for the Nascar drivers but judging from the TV ratings since the ‘playoff’ started, the fans haven’t partaken of the Kool Aid.

If we do indeed lose Hobbs, Matchett and either Varsha of Diffey it will be a tragedy. They are indeed the best broadcasting crew in motorsports. But as long as they dont go the route of the various Nascar broadcast teams perhaps I should be thankful.

Or ESPN overpaid like they did with their NBA package just to get it away from NBC. Count me is one that does not think this is fantastic. But then I don’t think ESPN is the end all for sports. They could have cares less about Nascar and the NHL and their Indy coverage is terrible. Those sports are better off without them. Their reach isn’t as far as it once was and they are losing customers in droves with their liberal slant trying to cram their social justice causes down our throats. I would be interested to know how the transaction came about. Did NBC drop out or was ESPN the highest bidder?