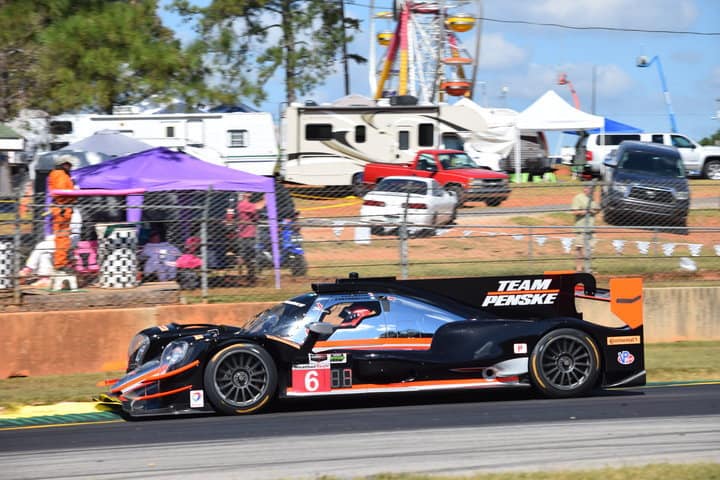 Team Penske did not take long to make an impression at Road Atlanta.  Juan Pablo Montoya was fastest overall in the second practice session Thursday for the IMSA WeatherTech SportsCar Championship at Road Atlanta.  Montoya set a lap of 72.445 seconds (126.220 mph) to top the charts in the No. 6 ORECA 07-Gibson.

In Prototype Challenge, it was once again Performance Tech Motorsports that asserted their dominance.  This time, it was Patricio O’Ward who was fastest with a lap of 76.652 seconds (119.292 mph).  O’Ward’s lap was 1.2 seconds faster than BAR1 Motorsports’ Garret Grist.

In GT Le Mans, the close action from practice No. 1 continued in the mid-afternoon.  Risi Competizione’s Alessandro Pier Guidi was fastest with a lap of 78.334 seconds (116.731 mph).  That lap was one-tenth of a second faster than Corvette Racing’s Marcel Fässler.  Porsche GT Team’s Earl Bamber was third fastest in No. 912, followed by BMW Team RLL’s Bill Auberlen.  Ford Chip Ganassi Racing’s Sébastien Bourdais was fifth quickest.

BMW Team RLL’s No. 24 did not turn a lap in the first session.  In the afternoon, the team did manage to get the No. 24 on-track.  However, Martin Tomczyk had an off-course excursion in the Esses.  The trip through the grass clogged up the grille with clippings.  Luckily, after a quick stop to let the clippings fall out, Tomczyk resumed.

In GT Daytona, it was Katherine Legge who reigned supreme.  Legge turned in a lap of 80.308 seconds (113.862 mph) to led the GT3 contingent in her Acura NSX GT3.  Legge’s lap was nearly six-tenths of a second faster than CORE autosport’s Colin Braun in the No. 54 Porsche.  Montaplast by Land-Motorsport’s Connor De Phillippi was third quickest, followed by Turner Motorsport’s Jesse Krohn.  Paul Miller Racing’s Madison Snow was fifth quickest.

WeatherTech SportsCar Championship teams have one more practice session on Thursday.  The special nighttime practice will run from 7:30 to 9 p.m. and allow driving to adjust to driving around the 2.54-mile road course in the dark.