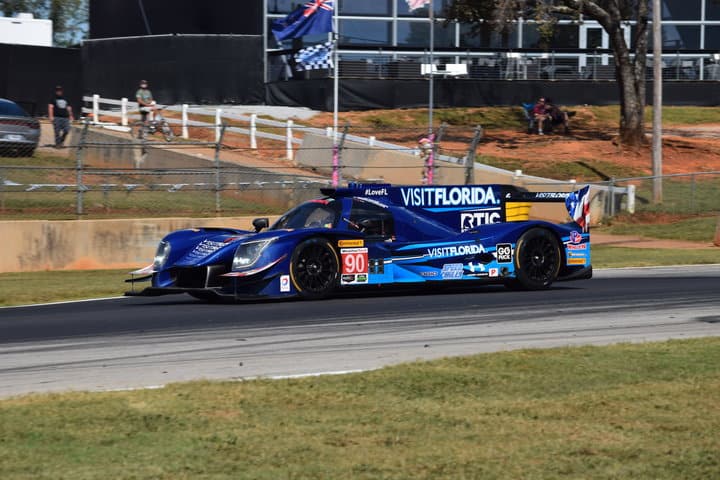 On Thursday morning (Oct. 5), the IMSA WeatherTech SportsCar Championship’s 39 entries took to the 2.54-mile road course at Road Atlanta for opening practice.  After 60 minutes of lapping, it was Visit Florida Racing’s Renger van der Zande who was fastest overall in his Ligier JS P217-Gibson.

Van der Zande’s lap of 72.650 seconds (125.864 mph) was a mere three-hundredths of a second faster than Wayne Taylor Racing’s Jordan Taylor.  Team Penske may not have fielded a sports car in years but did not miss a beat.  Helio Castroneves, fresh off of Wednesday’s announcement of his move to IMSA, was third quickest in the No. 6 ORECA 07-Gibson.  Castroneves’ lap was just eight-thousandths of a second slower than than Taylor.

JDC/Miller MotorSports’ Stephen Simpson was fourth quickest, another three-tenths of a second further back.  REBELLION Racing’s Mathias Beche rounded out the top five.

In Prototype Challenge, it was once again Performance Tech Motorsports on top.  James French turned in a lap of 76.328 seconds (119.799 mph), good enough for 11th overall.  The lap was eight-tenths of a second faster than BAR1 Motorsports’ Daniel Burkett.

GT Le Mans saw Laurens Vanthoor put his No. 912 Porsche 911 RSR on top with a lap of 78.320 seconds (116.752 mph).  That lap was a mere four-thousandths of a second faster than Tommy Milner in the No. 4 Corvette.  Antonio Garcia is less than a tenth of a second back in third, followed by Toni Vilander in the No. 62 Ferrari.  Ford Chip Ganassi Racing’s Richard Westbrook was fifth fastest.  Of those cars that took time, they were separated by only a quarter of a second.

The No. 24 BMW Team RLL BMW M6 GTLM shared by Nicky Catsburg, John Edwards and Martin Tomczyk failed to set a time in the session.  The team spent practice trying to diagnose an issue with the car.  It plans on getting out for the second session.

In GT Daytona, Jeroen Mul set the fastest lap of the session with just four minutes remaining.  Mul’s lap of 80.408 seconds (113.720 mph) was a quarter of a second faster than Connor De Phillippi in the No. 29 Montaplast by Land-Motorsport Audi.  Andy Lally was third quickest in the No. 93 Acura, followed by Bryan Sellers in the Paul Miller Racing Lamborghini.  Scuderia Corsa’s Alessandro Balzan rounds out the top 5.

There were no cautions during the 60-minute practice session, but the session was not completely clean.  There were three spins of note, one for Bruno Senna in the No. 22 Nissan DPi, along with Kyle Masson in the PC-class leading No. 38.  Garret Grist also had an off-course excursion at Turn 5 while Jeroen Bleekemolen took a trip through the grass exiting Turn 3.

IMSA WeatherTech SportsCar Championship teams have two more practices on Thursday.  Session No. 2 is scheduled for 3:15 p.m. and will run for 60 minutes.