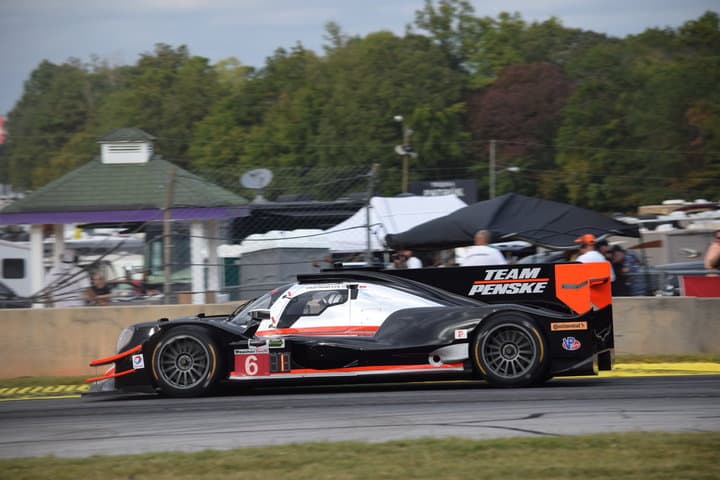 Team Penske may not have much experience with the current LMP2 formula, but that ultimately didn’t matter on Friday.  Helio Castroneves took the team’s ORECA 07-Gibson on track and laid down the best lap of the weekend to earn the overall pole for Saturday’s Motul Petit Le Mans.  Castroneves’ lap of 71.314 seconds (128.222 mph) stands as the fastest lap turned at Road Atlanta since the ALMS/Grand-Am merger.

Afterwards, Castroneves was very pleased, but downplayed the team’s strength.

“[Our pace was] not a statement.  I’ll tell you what, we’re still learning,” Castroneves said after the session ended.  “The car was incredible. It was a little bit of understeer, I wasn’t expecting that. But once I figured out what I needed to do then I said OK that’s just gonna have to make it happen. It was unbelievable. It took a while to figure out what to do with the Continentals. Obviously, I’m so used to running the Firestones so it was a little bit different than I was expecting. Man, it was awesome and the car was as well.”

The surprise in the session was the lack of strength shown by the Cadillac DPis.  After being fastest for most of the season, the best either of the Cadillacs could manage was seventh for points leader Ricky Taylor.  The two Action Express Racing Cadillacs will start ninth and tenth.

In Prototype Challenge, it was once again Performance Tech Motorsports on top.  James French turned in a lap of 76.069 seconds (120.207 mph) to win the class pole by 1.175 seconds over BAR1 Motorsports’ Garret Grist.

GT Le Mans saw one of the closest qualifying sessions in recent memory.  The top five drivers in the session were separated by just over seven-win of a second over 2.54 miles.

At first, it appeared that Corvette Racing’s Antonio Garcia was going to be the man to beat.  However, Risi Competizione’s Toni Vilander set the best time of the session on his fifth lap.  Just for good measure, Vilander’s seventh lap of the session was 77.660 seconds (117.744 mph), a pickup of a mere four-thousandths of a second.  While it wasn’t necessary to give Vilander the class pole, that just showed the urgency involved.

Vilander’s lap was four-hundredths of a second faster than Ford Chip Ganassi Racing’s Richard Westbrook in second.   However, the No. 67 Ford flunked post-qualifying inspection due to overall ground clearance being too low.  As a result, Westbrook will start the race from the rear of the field.

As a result of Westbrook’s penalty, Garcia inherited second in GTLM.  Joey Hand will start third in the second Ford GT, followed by Bill Auberlen.  Auberlen was a mere two-thousandths of a second slower than Hand.  Corvette Racing’s Tommy Milner will start fifth.

GT Daytona saw Matteo Cressoni win the class pole in the championship-elect Scuderia Corsa Ferrari.  Cressoni’s lap of 80.661 seconds was actually slower than the best laps turned this weekend.  GT Daytona was the only one of the four classes in which that occurred.

Cressoni’s lap was eight-hundredths of a second faster than Andy Lally in the Michael Shank Racing with Curb-Agajanian No. 93 Acura.  3GT Racing’s Jack Hawksworth will start third in GTD, followed by Connor De Phillippi in the Montaplast by Land-Motorsport Audi.  Turner Motorsport’s Jesse Krohn qualified the lone BMW M6 GT3 in fifth.