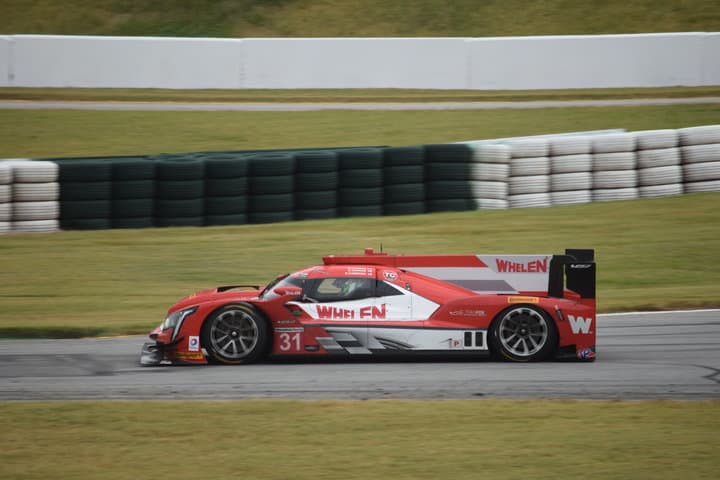 At Road Atlanta, Saturday’s Motul Petit Le Mans has been an up-and-down affair. There has been tight racing, contact and a series of yellows.

The race has not been kind to a number of early favorites. Helio Castroneves started the Team Penske ORECA 07-Gibson from the outside pole but almost immediately lost the lead to Pipo Derani. 18 minutes into the race, Scuderia Corsa’s Matteo Cressoni clipped the grass under braking for the chicane. As a result of wet grass following early rain, Cressoni lost control and clipped Castroneves in the right-rear corner. Both drivers spun into the gravel to bring out the first full-course yellow of the race.

Castroneves lost a lap being pulled out of the gravel but continued following a rear bodywork replacement. At the halfway point, the Team Penske No. 6 was running sixth overall.

Cautions have been quite prevalent at Road Atlanta so far. Through five hours, there were seven full-course cautions, three of which for debris. One was for a stopped car on course. The other three were for incidents.

However, the scariest moment of the day came in the second hour when PR1/Mathiasen Motorsports’ José Gutierrez lost control in Turn 5 and overcorrected.

Wow … what a hit. Watch the No. 52 Prototype driven by @JoeGtzJ catch air after slamming into the tire barrier in Atlanta.#MotulPLM pic.twitter.com/kBNATilZWI

Gutierrez’s car was launched once it hit the gravel trap before going into the tires head-on. Luckily, Gutierrez walked away from the crash, but the Ligier JS P217 is done for the day.

Tequila Patron ESM was dominant early on, but team owner/driver Scott Sharp came together with JDC/Miller MotorSports’ Chris Miller in the chicane. Both drivers spun and Sharp got the No. 2 beached in the gravel. After losing a lap getting pulled out, Sharp resumed. The No. 2 has since gotten back on the lead lap. Miller was judged responsible for the incident by IMSA officials and was given a pass-through penalty.

Wayne Taylor Racing ran quite well early on in the race during Ricky Taylor‘s two-plus-hour stint.  However, after Ryan Hunter-Reay got in the car, the Cadillac engine developed oil pressure issues. Eventually, the engine quit all together and Hunter-Reay coasted back to the pits. Just starting the race was good enough to give Ricky and Jordan Taylor the Prototype championship, but it was not long before the car was retired.

In Prototype Challenge, it was Performance Tech Motorsports’ No. 38 with Kyle Masson in the lead with nearly two full laps on BAR1 Motorsports’ No. 20 driven by Buddy Rice. Pole-sitter James French lost the class lead on the first lap to Garret Grist in the No. 26 from BAR1 but quickly regained it and supplemented his advantage.

GT Le Mans has been an all-out battle between the various manufacturers.  Despite drivers from four of the five manufacturers leading laps in the class, it was the pole-sitting No. 62 Ferrari from Risi Competizione that led at halfway with Giancarlo Fisichella behind the wheel. Fisichella was 3.75 seconds ahead of Porsche GT Team’s Dirk Werner, followed by BMW Team RLL’s Kuno Wittmer. The two Corvettes were fourth and fifth, led by Marcel Fässler.

GT Daytona has seen Michael Shank Racing with Curb-Agajanian’s No. 93 entry dominate much of the race. A decision to start on slicks when much of the rest of the class started on wet tires greatly benefited the Acura since most of the class was forced to pit in the opening 15 minutes to take the wets off.

At halfway, Mark Wilkins was leading by almost two seconds over Paul Miller Racing’s Madison Snow. Montaplast by Land-Motorsport’s Christopher Mies was third in the No. 29 Audi, followed by Matt McMurry in the Park Place Porsche.

Through five hours, there have been three retirements.  The PR1/Mathiasen Motorsports No. 52 due to its aforementioned crash, along with the No. 10 Cadillac DPi-V.R. due to engine issues.  In addition, the No. 50 WeatherTech Racing Porsche retired after completing only 15 laps due to gearbox failure.