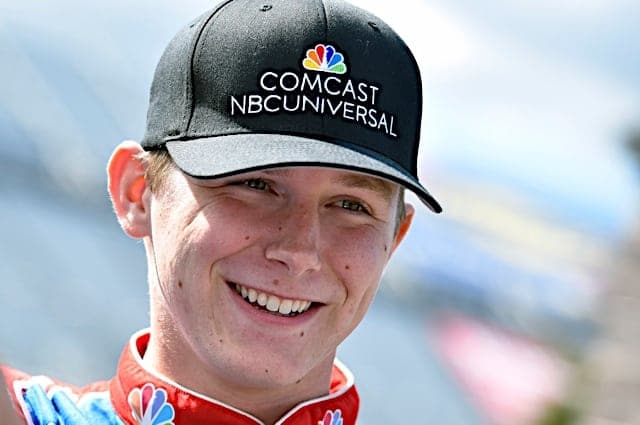 It’s been a big week for Richard Childress Racing, as the long-standing organization finalized its 2018 lineup for the NASCAR XFINITY Series.

Along with Daniel Hemric signing on for a second year in the No. 21 Chevrolet, the team welcomes a new face in Matt Tifft, who departs Joe Gibbs Racing for the Chevy crew come February.

With a big adjustment ahead, 21-year-old Tifft is confident the move will offer a long-term future in the sport.

“We were looking at the future and what made the most sense to hopefully keep me in the sport for a while,” Tifft told Frontstretch. “I wanted to make sure we found a place that was a good fit for me. I think we found that there.”

“I got to meet [Childress] this past week,” Tifft said. “And I’ve have had dialogue with the team as well before then. They’ve all been very accepting of me and excited to have me over there. It’s been the same from my side.”

Unlike 2017, when Tifft has had a roundtable of part-time JGR teammates from the likes of Kyle Busch, Ryan Preece and Kyle Benjamin, RCR will currently offer one full-time teammate in Daniel Hemric (though the team has not yet announced the plans for its other cars, having fielded five in 2017).

Tifft sees benefits in having a stable face to work alongside in 2018, one of which is Hemric’s car knowledge.

“[Daniel and I] got to spend some time together this year in Cincinnati doing one of the Kentucky [Speedway] races,” he said. “He seems like a great guy, he has so much car knowledge. From the things he’s learned over the years, from building cars and building late models, will help me understand more of the moving parts of these cars. Anything I can do to learn more is a great thing.

“From what I’ve been able to talk to him before, he seems he’ll be a good teammate to bounce ideas off.”

With change on the horizon, Tifft is at a crossroads of performance gains in the XFINITY Series, saying the No. 19 Toyota team has “finally gotten our chemistry together” in these final couple months of the season.

Is it all for naught having to hit the reset button in five weeks? Tifft believes experience will aid him in his new home.

“From what I’ve understood so far, it sounds like I’ll be kind of plugging into an experienced team,” he said. “The only thing that changes is me in there. So they have the notes they want to use, the changes they want to work through.

“It’s big to have momentum,” he said. “It’s a big confidence booster if we can do that. You want to show to teams that you can do it and to show our group next year that we can do just that.

“I definitely want to get a win before the year’s over. It’d be great to do that with this group of guys. We’re all working toward that every weekend or else we wouldn’t show up to the track.”

(Below is a video capture from our conversation with Matt Tifft)