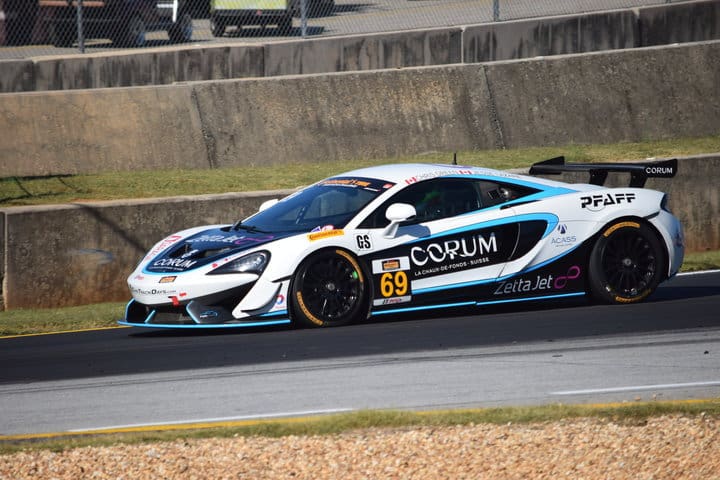 On Friday afternoon (Oct. 6), the all-Canadian Motorsport in Action’s Chris Green and Jesse Lazare claimed overall victory in the FOX Factory 120.  The Quebecois duo’s victory was spurred by consistent pace on track and fast pit stops.

Afterward, Lazare was thrilled with the performance of the Motorsport in Action team.

“Chris [Green] did an amazing job putting me [up front],” Lazare told Frontstretch.  “As soon as I got into the car, I maintained pace, maintained tires.  The car was outstanding.  Most comfortable car I’ve ever driven, especially on this hot, hot track.  The team did a great job and [brought us] the victory.”

C360R’s Paul Holton started from the pole in his McLaren 570S GT4 and opened up a small gap on the pack early on.  Green kept chase in second while Jack Roush Jr. was third.  Unfortunately for Roush, the KohR Motorsports challenge at the front was over early.  Roush’s No. 59 Ford Mustang GT4 lost power and ground to a halt just before the FOX Factory bridge to bring out the first of four full course cautions a half hour into the race.

During the caution, the first round of pit stops occurred for GS teams.  The Motorsport in Action team got Green out first with a quick stop.  Holton still had the fastest car and re-took the lead shortly after the restart.  However, the No. 76 McLaren had a sudden loss of power that brought them into the pits.  The C360R was able to briefly get the No. 76 back on track, but they would eventually fail to finish.

Following the second round of stops, Automatic Racing’s Al Carter rose up to second.  However, Carter’s Aston Martin just did not have the pace to keep up.  A full-course caution late bunched the field back up, but another crash on the restart ended the festivities a couple of minutes early.

Rennsport One’s Dillon Machavern and Dylan Murcott started off Sunday with some trepidation.  The engine blew on the championship-leading Porsche Cayman GT4 Clubsport MR during qualifying.  While Murcott qualified fourth, the team was forced to change the engine in three hours in order to make the start of the race.

From the rear of the Grand Sport class, Murcott was able to race up to the ninth spot.  Once Machavern got in the car, he simply maintained position.  With their nearest competitors in the points (Bodymotion Racing teammates Cameron Cassels and Trent Hindman) finishing sixth, that was more than enough to give Machavern and Murcott the Grand Sport championship.

Afterward, Machavern and Murcott were overjoyed.

“[The championship] means everything to me,” Murcott said.  “It’s the biggest accomplishment that I’ve had in my racing career.  To do it with this great of a team and this great of a co-driver, it’s just unreal.”

“This title is absolutely incredible,” Machavern noted.  “It’s a huge team effort for all the boys at RS1.  They worked so hard all season and today just showed…what they’re willing to do in order to take home a title.”

In Street Tuner, Murillo Racing’s Christian Szymczak won the pole and pulled away from the pack early on.  Szymczak was able to pull out more than five seconds over an all-out scramble for second involving both BimmerWorld BMW 328is, a couple of Freedom Autosport’s Mazda, the C360R Audi of Roy Block, the CRG-I Do Borrow Nissan of Sarah Cattaneo and Justin Piscitell in the No. 56 Murillo Racing Porsche.

The second full-course yellow came out just before halfway when MINI JCW Team’s Jared Salinsky lost control exiting Turn 1 and crashed into the tires.  Salinsky was OK but noted that he likely didn’t take tire wear into account with his pace.  Pushing too hard likely caused the incident.

A terrible pit stop for the No. 34 of Szymczak took the pole sitter right out of contention for the class win.  BimmerWorld Racing’s Tyler Cooke won the race off pit road, but Freedom Autosport’s Tom Long took the lead by staying out as a result of an alternate pit strategy.

Cooke quickly took the lead away from Long, but the man on the move was Owen Trinkler in the pink Nissan.  Exiting the pits in sixth, Trinkler quickly moved up through the pack after the restart and snatched the lead away in less than 10 minutes.

From there, Trinkler pulled away from the pack and seemed good for victory.  However, Greg Liefooghe slid off-course and got stuck in the trap at Turn 6 to bring out the third full-course yellow with eight minutes to go.  That closed everyone back up.

The race was set up for a GWC, but chaos broke out on the restart.  A collision among the Street Tuner top five resulted in Long running into the back of his own teammate, Andrew Carbonell.  Carbonell actually got on two wheels before sliding off-course.  Cooke was hit from behind and turned nose first into the wall.

As a result, the race ended under caution.  Trinkler scored his and Cattaneo’s second victory of the year.

Since CRG-I Do Borrow is cutting back to a part-time schedule in 2018 due to personal responsibilities away from the track (i.e. Weddings and life in general), Friday’s win could very well be a farewell for Trinkler from the Cattaneo family-owned team.

“[The race] was unreal,” Trinkler said.  “I can’t thank my boys at CRG [enough].  This is probably our last race together if I get a full-season deal with somebody else.  What a great way to send the Nissan and Sarah out.”

The restart crash did create some chaos in the finishing order.  C360R’s Block and Pierre Kleinubing finished a strong second in the swan song for the team’s Audi S3 (the car is currently for sale and the team will focus on the McLarens and TCR entries next season).

MINI JCW Team’s Derek Jones and Mat Pombo originally crossed the line in third.  However, they were put back for passing under yellow.  The team contended that they were trying to avoid a wreck.  Regardless, IMSA officials moved the No. 25 Freedom Autosport Mazda MX-5 of Stevan McAleer and Chad McCumbee to third.  Pombo and Jones had to settle for fourth, while Szymczak and Christopher Stone had to battle back from their bad stop to finish fifth.

Points leader Eric Foss finished ninth on Friday, one of his worst runs of the season.  However, Rennsport One’s No. 17 for Nick Galante and Spencer Pumpelly had issues and failed to finish.  As a result, Foss took home the Street Tuner championship.  Afterward, Foss was very pleased with his accomplishment.

Mosing, Foss’ teammate for most of the season before being diagnosed with a break of the L2-vertebrae, was on site Friday to support Foss.  Mosing is currently in a back brace for the next three weeks, but he plans to be back full-time in 2018.  Foss and Mosing will not defend the ST title.  Instead, the team is moving up to Grand Sport with an undetermined GT4 car.