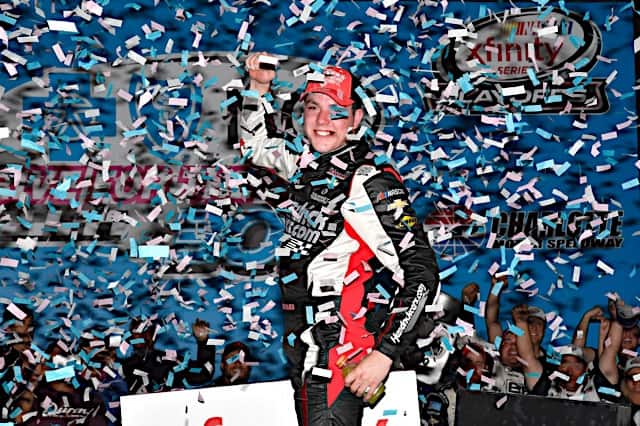 Welcome back to NASCAR, Alex Bowman.

Following a seven-month hiatus from the cockpit in NASCAR competition, Bowman scored victory in his first XFINITY Series race of 2017 for Chip Ganassi Racing.

For the Arizona native, Saturday night’s Drive For The Cure 300 at Charlotte Motor Speedway was his first career XFINITY win in 51st start.

“It’s a dream come true,” Bowman said. “It’s been a long time since I’ve raced so to come here and be as competitive as we were tonight, I was surprised how competitive we were.”

Taking the lead from William Byron with 32 laps to go, Bowman led the remainder of the night, beating second-place Sam Hornish Jr. to the line by 1.390 seconds. For Bowman, a tough climb up the NASCAR ladder made the win extra special toward his No. 88 Hendrick Motorsports ride in 2018.

“From 2008 to ’12 I won everything I got in. You almost don’t appreciate it at that point,” Bowman said. “From ’13 to ’16, we were never able to capitalize. I won a race in anything since 2012, so to go through the ups and downs, align myself with Hendrick Motorsports, stay patient, it makes this so much more special.”

For Hornish, the 200-lap race started from the rear, as a rain-out in qualifying set the starting lineup by car owner points, putting the part-time Team Penske No. 12 to the 31st spot. As Hornish led Friday practice, a march from the rear was expected.

Speeding through the field in the opening stage, Hornish reached the top 10 by the end of Stage 1, finished third in Stage 2 and drove into the runner-up spot on the final restart.

“It was a bit of fighting for me to get back to second,” Hornish said. “I started venturing up to the top and found out there was good grip up there. I wish I moved up sooner.”

Though it was Bowman in Victory Lane, it was looking like a Joe Gibbs Racing night in Charlotte, as Daniel Suarez and Erik Jones dominated the opening two stages. Suarez led 111 laps from pole while Jones won the first stage.

However, it all fell apart for the Cup rookies, as Jones spun into the backstretch wall on lap 121 while Suarez was penalized on the race’s final round of pit stops. They finished 30th and eighth, respectively.

As if the run for the win wasn’t good enough, the run for the final playoff spots was even better, as Saturday stood as the first elimination race of the 2017 XFINITY playoffs. Matt Tifft rebounded from a pit road penalty to finish ninth, advancing through, while Brendan Gaughan missed advancement by only one point behind Ryan Reed.

For Gaughan, he simply didn’t have enough this playoffs to make it through, he finished 11th while Reed finished 12th.

“It was just going to be a matter of who wheels it there,” Reed said. “But we need to get our cars faster to get into the Round of 8 and have a legit shot going into Homestead. We got the guys and girls to dig deep to find it.”