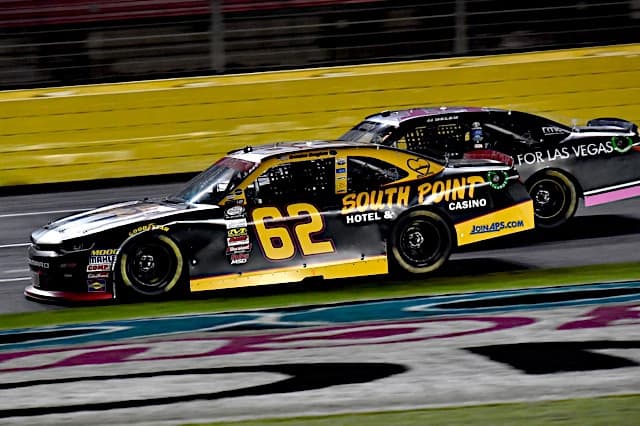 If Brendan Gaughan truly loves pressure, he was having a blast Saturday night at Charlotte Motor Speedway.

In the first elimination race of the 2017 XFINITY Series playoffs, four would go home while eight advance on. For Gaughan, the Richard Childress Racing driver entered the event outside playoff advancement by just two points behind Ryan Reed.

He left the weekend just one behind.

“It’s the reason [Reed and I] were close in points, we’ve been close on the track all year long,” Gaughan said.

Indeed, while the two battled hard in the final laps of the Drive For The Cure 300, it came down to only one position between advancing to the Round of 8 and having your title hopes crushed.

With a green-flag run of 34 laps to the end, it was a necessity for Gaughan to pass 10th-place Elliott Sadler while Reed attempted and eventually succeeded in holding off Brandon Jones for 12th.

Gaughan said he was hoping to get a little help from his RCR teammate Jones, however, he wanted to get by the No. 1 of Sadler for that one point.

“Unfortunately, we weren’t fast enough to get anyone else,” he said. “We were getting the No. 1 and we needed Brandon to get in front of [Reed]. But heck, a good run.”

Unfortunately for the 42-year-old, the 2017 season has fallen off from his past seasons in XFINITY, only scoring two top fives through 29 events.

“We’ve had a decent season, I wouldn’t say great,” he said. “We missed a couple points here and there the last couple rounds. That’s what it boils down to. We have to be better.”

Despite the sour end to a hot night, Gaughan applauds NASCAR’s playoff system, simply calling it a “brilliant” format for the fans and competitors.

“There’s nothing like it in sports,” he said. “I’ve played in the NCAA tournament, college football. There is nothing like the format they came up with. It’s really, really brilliant. Great for the fans.

“And come on, it came down to one teammate catching a guy and me catching a Chevrolet by inches to not make the playoffs. That’s fun. Nothing ever comes easy for us and [crew chief] Shane Wilson. We wouldn’t want it any other way.”