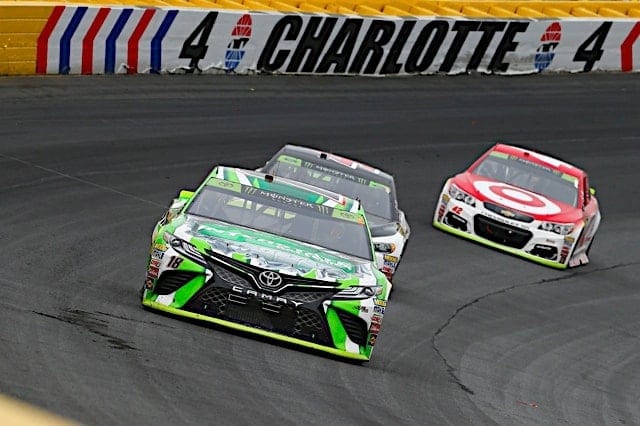 Sunday at Charlotte Motor Speedway was one tough race for Kyle Busch.

After starting from the fourth position and leading 22 laps, the Bank of America 500 took a tough turn on lap 136, when the No. 18 car broke sideways and pounded the Turn 3 wall while running second.

Bringing his wounded No. 18 to pit road under the five-minute clock, Busch returned to the track, quickly falling two laps off the pace while having multiple slip-ups into the wall.

Two major hits came on laps 280 and 327, with the later bringing out the race’s penultimate caution. Despite the increasing damage, Busch still managed to finish the 3.5-hour race in the 29th position, six laps down.

“[I was] just trying to make it to the end of the race and luckily we did,” Busch said.

But it was worse than what it seemed, if you can believe that.

“I’m all right. I’m better now,” Busch said after exiting the infield medical center. “It just got so hot that literally you felt like you were going to puke. From there, just trying to get cooled back down and get body temperature back to normal.”

As Sunday stood as the opening race of the Round of 12, Busch took a hit in the playoff points, too, exiting Charlotte just 12 points above the cutoff line with two races remaining.

.@KyleBusch says he is feeling better after falling to the ground after the race. #NASCARPlayoffs #Rowdy18 pic.twitter.com/Oqb1RVoMlY

Maybe in Brian’s continual search for greater safety in his product he should bring in a rule against racing with crushed panels. It should take more than five minutes. Depending on the manufacturer of course. Because he can.

Yep, at the very least there should be a 3 strikes/cautions and your out rule. This happens throughout the season but usually with back marker cars.