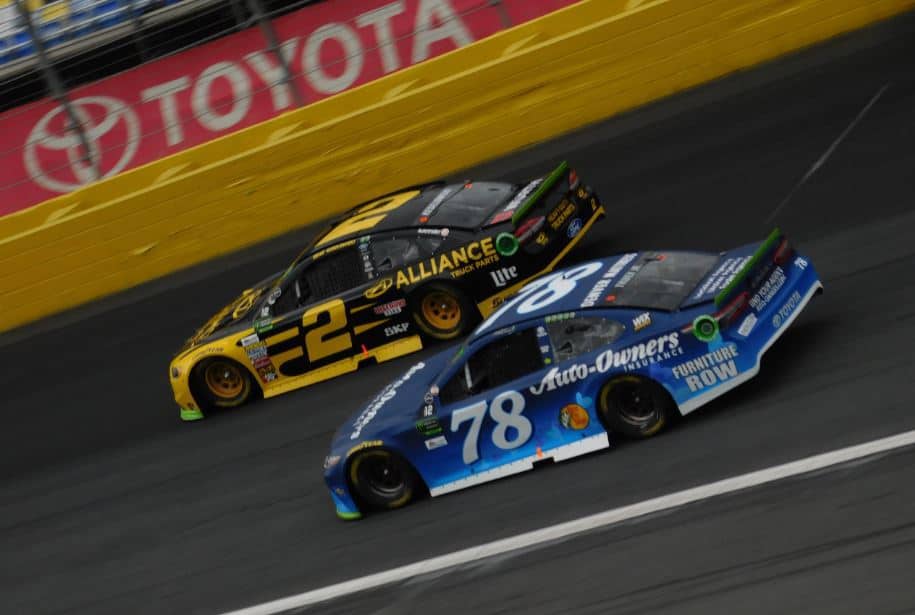 The win, his sixth of the 2017 Monster Energy NASCAR Cup Series season, advances him to the Round of 8, which starts three weeks from now at Martinsville.

“Everything is winding up the way it needs to,” Truex said. “We didn’t pass the leader on the track, we passed them on pit road. It was a huge advantage to be the leader. I thought the No. 4 [Kevin Harvick] was a little faster than us but he couldn’t get any closer.”

Though it was a fourth consecutive victory for Toyota this year — their longest win streak of the season — it was dominated by the Chevrolet of Kevin Harvick, who led 149 of 337 laps and won both stages in his Stewart-Haas Racing Ford.

Despite the speed, clean air proved to be a critical factor in deciding the winner, as Harvick was unable to overtake either the No. 78 of Truex or the No. 42 of Kyle Larson.

Following a spin by Kurt Busch, the event went into overtime, lining race leader Truex against Denny Hamlin on the front row. While Truex leaped out to the lead, Chase Elliott passed Hamlin to grab second place, his third runner-up result in the last four races.

For Hamlin, the pole-sitter felt the heat during the event.

“The humidity is probably what drained me the most today,” Hamlin said. “There’s a lot of salt stains on my suit so that tells me that dehydration was a factor today.”

With Jamie McMurray ending one of his best races of 2017 in the fifth spot, Chip Ganassi Racing looked to have one car in Victory Lane, as Larson led the event before the penultimate yellow brought the field to pit road.

Here, Larson suffered a slow stop when his tire carrier tripped while servicing the car. The mistake brought the No. 42 back to 11th for the restart. He finished 10th.

Kyle Busch likely had the worst day of the field when he broke loose and crashed into the wall on lap 136. The damage dragged the playoff driver off the lead lap before hitting the wall numerous times for the remainder of the day.

There have been countless races in July or August that were run in much hotter weather. For Pete’s sake they used to run at Talladega in July. I guess Denny will asking to be paid MORE than other sports now since he had to race in 80 degree weather.

What about the Firecracker when it was held on JULY FOURTH IN THE MORNING? Ricky Rudd should have asked for a raise after he won at Martinsville and drivers needed oxygen when the real race was over.

” it was dominated by the Chevrolet of Kevin Harvick, who led 149 of 337 laps and won both stages in his Stewart-Haas Racing Ford.

Kasey Kahne was the only driver other than a Chosen One to lead the race. That will never happen at Homwatead.

It was humid as hell there. First time at Charlotte in probably 7 or 8 years… I used to go every May and October. I can remember it being hotter but never as humid.

I also remember grandstands on the backstretch, a full infield, and large crowds. None of those things still exist. Place looked like a ghost town.