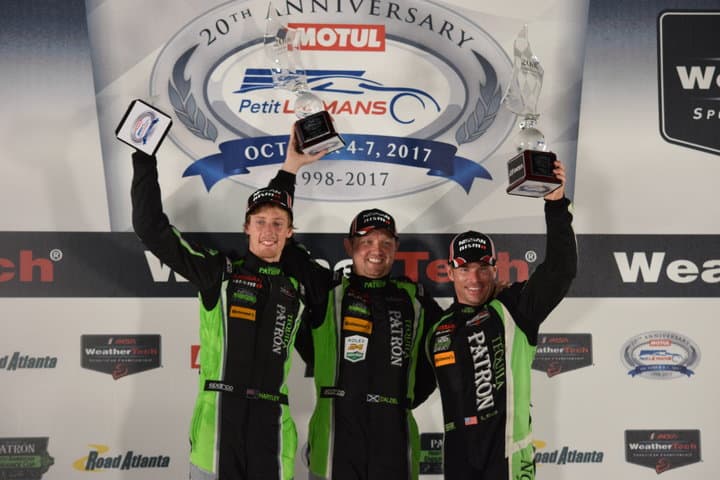 In endurance racing, victories can come in many ways.  One is by sheer dominance.  For Tequila Patron ESM’s No. 2 Nissan DPi shared by Ryan Dalziel, Brendon Hartley and Scott Sharp, it was simply being in the right place at the right time.  Hartley was third when the top two drivers were penalized for on-track incidents in the final 25 minutes.  That allowed Hartley to take the lead and hold for the Motul Petit Le Mans overall win.

Despite the win, Hartley was hoping for a more exciting finish to the race.

“We three race contenders…were in the back of the GTs,” Hartley said after the race.  “I kept it clean, but the other two didn’t and that’s how I got to stay out.  I was hoping for a good scrap with Felipe at the end. It was a shame he got a penalty. It would have been a good finish to the race.”

On the final restart, Action Express Racing’s Filipe Albuquerque forced teammate Dane Cameron off the road on the pit straight.  That earned Albuquerque a stop and a 60 second hold for “unjustifiable risk.”  Shortly afterwards, overall leader Pipo Derani had contact with Ford Chip Ganassi Racing’s Ryan Briscoe in the Esses.  Briscoe spun and hit the tires, losing his rear wing in the process.  Derani was given a drive-through penalty for avoidable contact.

The penalties left Hartley in front of Cameron by seven seconds.  From there, Hartley maintained his advantage and took home the win.

Cameron brought home the No. 31 Cadillac DPi-V.R. he shared with Mike Conway and Eric Curran in second.  Team Penske’s No. 6 ORECA 07-Gibson had an interesting day from the overall pole.  A crash in the opening 20 minutes for Helio Castroneves put them a lap down, but the trio of Castroneves, Juan Pablo Montoya and Simon Pagenaud battled back to finish right on Cameron’s tail in third.  Derani, Bruno Senna and Johannes van Overbeek ended up fourth after the late drive-through penalty.

The scariest incident of the day occurred in the third hour when PR1/Mathiasen Motorsports’ José Gutierrez got loose in turn 5.  Gutierrez then overcorrected and sent the car into the gravel.  However, once in the gravel, the car jumped in the air before smashing nose first into the tires.

Wow … what a hit. Watch the No. 52 Prototype driven by @JoeGtzJ catch air after slamming into the tire barrier in Atlanta.#MotulPLM pic.twitter.com/kBNATilZWI

Gutierrez was ok, but the Ligier JS P217-Gibson was at a 45-degree angle on top of the tires..  As a result, he had to be helped from the car.  The team was out on the spot.

For Jordan and Ricky Taylor, they clinched the Prototype championship by just starting the race.  The race seemed to be going well until the car developed oil pressure issues during the third hour.  The car died on Ryan Hunter-Reay in the third hour and that was it for the day.

In Prototype Challenge, the first five hours of the race ran similarly to the rest of the season.  However, during the sixth hour, the class was turned upside down.  Shortly after a pit stop, Kyle Masson collided with the REBELLION Racing No. 13 ORECA 07-Gibson driven by Nick Heidfeld.  Heidfeld went hard into the wall while Masson spun into the grass, damaging the ORECA FLM09-Chevrolet.

While Heidfeld was effectively out on the spot, the No. 38 was towed back to pits.  At the time, Masson had a two-lap lead, but it took a half-hour for the Performance Tech Motorsports team to fix the damage.  That kissed any chance at a perfect season goodbye.

Performance Tech Motorsports’ issues gave the victory to BAR1 Motorsports.  Ultimately, it was the No. 26 of Tomy Drissi, John Falb and Garret Grist that took the class victory by eight laps over the sister No. 20.

In GT Le Mans, the class was nothing short of a slobberknocker for the entire race.  There was side-by-side action all day long between the various manufacturers.  At the final restart with 26 minutes to go, eight of the nine starters were still on the lead lap.

Bill Auberlen, who was starting his 400th race for BMW, summoned some “Bill Power” and opened up a small gap on the pack.  That was enough for the 47-year old Auberlen to take victory along with teammates Alexander Sims and Kuno Wittmer.

Auberlen was just a second ahead of the No. 3 Corvette of GTLM champs Antonio Garcia and Jan Magnussen, along with endurance driver Mike Rockenfeller.  Risi Competizione’s Giancarlo Fisichella, Alessandro Pier Guidi and Toni Vilander finished third.

Finally, GT Daytona was really a two-car race for much of the day.  The two strongest entries were the No. 29 Montaplast by Land-Motorsport Audi and the No. 93 Michael Shank Racing with Curb-Agajanian Acura.  The key moment in the race was when Mark Wilkins had contact with CORE autosport’s Nic Jonsson in the Esses.  Wilkins ended up spinning and nosing into the tires hard.

Wilkins was ok, but the No. 93 Acura was eliminated on the spot.  That left the Montaplast by Land-Motorsport Audi of Connor De Phillippi, Christopher Mies and Sheldon van der Linde without any real challengers.   De Phillippi drove the No. 29 Audi to GT Daytona victory, the team’s first in only their third IMSA start.