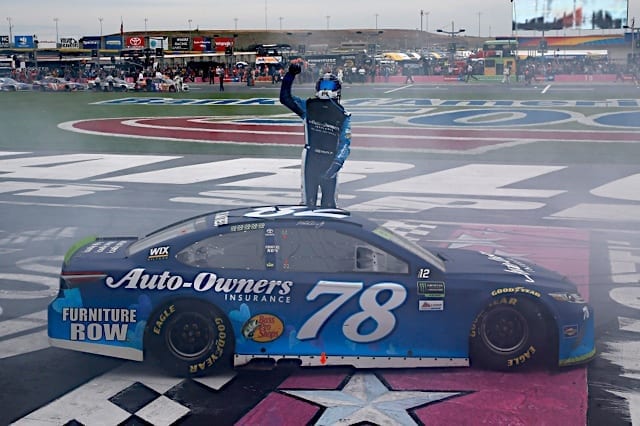 It’s not often that a driver who single-handedly brings out three different cautions deserves accolades, but this week, Kyle Busch does.  Why?  There was a time when Busch would probably have driven to the garage, climbed out and ridden off into the sunset. (He did that once, leaving his Hendrick Motorsports team to find a substitute driver when they fixed the car and Busch could not be found. Dale Earnhardt, Jr. finished the race and landed in Busch’s ride). But this week, Busch gutted it out despite heat and fumes in the cockpit from crash damage to inner crush panels.

Perhaps Busch should have pulled in and packed it up. He sank to the infield grass as soon as he climbed from the No. 18 car and was treated at the infield care center before being released to go home.  Carbon monoxide fumes are no joke. It would have cost him just six or seven points, and he’s got a sizable pile of playoff points to work with.  But he’s not locked into the next round, Talladega Superspeedway is on the horizon, and so Busch stayed in the seat despite feeling sick and lightheaded. Despite the 29th-place result, that’s a winner’s move.

What… happened to the Toyota advantage?

Yes, Martin Truex, Jr. won the race. But for the first time in several weeks, it didn’t look as though the Toyota camp had the same strength has they’ve displayed.  Truex wasn’t dominant; Kevin Harvick’s Ford was faster for most of the day and Kyle Larson’s Chevrolet was the class of the field.

Asked about the performance after the race, Denny Hamlin stated, “the gap is gone.” He went on to say that he never felt like the Toyotas had the speed they’ve displayed so often at Charlotte.  If that’s true, it couldn’t come at a worse time for those teams…or at a better one for the rest of the sport.

While NASCAR said there was no advantage and the Toyota factory teams attribute everything to hard work, fans saw the dominance and the natives got restless.  And with the playoffs in full swing, there’s no better time for other teams to catch up.  While it’s hard to argue that anyone but Truex deserves to win the title at this point, a good battle down the stretch is only a good thing for the sport and its backers.

Where… did the pole-sitter and defending race winner wind up?

Denny Hamlin took the pole Friday night and led early, but it was clear almost from the start that he didn’t have a car that would compete with some of the others in the field.  After finishing fourth, Hamlin credited his crew for his result.  “We had a sixth to ninth-place car,” Hamlin said after the race.  But a combination of mistake-free stops and the first pit stall gave him an edge.

Jimmie Johnson has picked up the pace in the last couple of weeks after a miserable summer (and in reality, a miserable year, wins aside).  But even with stellar pit work save a costly mistake late in the race, Johnson was never a serious threat to win, coming home seventh.  He probably should have finished fourth or fifth without the pit error, but to be no better than a top-five car at Dover and Charlotte should be an eye-opener. If Johnson has an eighth title run left in him, he needs to find what’s missing soon.

When… should these races be run?

Charlotte Motor Speedway has always been a particularly temperature-sensitive track, so it’s no surprise that an afternoon race on the 1.5-mile oval was vastly different — and much better — than a night version.  The race opened with a 35-lap battle for the lead between pole-sitter Hamlin and Harvick and featured some hot and heavy racing within  the top 10 for much of the day.  Sure it had that long run to kick off the final stage where things got strung out and the incentive was to save equipment, but that’s a 500-mile race.  Save the Bristol night race, and the end of the Coca-Cola 600 (and even that could start at least an hour earlier for a better show), races should be run in the heat of the day.

Truex has been good all year, and this week he got lucky.  The race was Larson’s to lose. Thanks to a mistake on pit road, Larson lost it.  Chase Elliott looked like he could close on Truex if he had more time, but the laps ran out. Harvick’s car went away late.  The No. 78 team didn’t have the best car, but the team made the best decisions when they needed to.  The saying that it’s sometimes better to be lucky than good rang true on Sunday, but it’s also true that a champion needs both.  If he doesn’t win the title this year, it will ring very hollow, because the No. 78 team has done everything right this season.

How… come Jimmie Johnson didn’t get penalized for pitting outside the box?

That was the big question when Johnson rolled out of his box, as he’s supposed to when the jack drops, only to have crew chief Chad Knaus holler at him to stop and back up as crewmen attempted to tighten a couple of lugnuts.  On a stop that late in the race, two loose nuts would have meant a suspension for Knaus, something the struggling team can ill afford in the playoffs.  Video showed the crewmen tightening the nuts as Johnson backed up, and he never rolled all the way back into his box before the work was finished and he rejoined the field.

Why no penalty?  Had Johnson stopped outside his box initially and work begun on the tires, the rule states they’d have to be re-secured before he backed up or serve a penalty. The reason NASCAR gave for not penalizing Johnson was one they’ve used in the same situation at other times this year: Johnson’s team penalized themselves.  While he didn’t lose a lap, Johnson had been running fourth before the stop and had gained spots in the pits all day. He wound up 15th afterward, and could only recover to seventh.  NASCAR deems that enough of a penalty and has apparently made the same call in the past — it just wasn’t shown all over TV and social media.  It’s not strictly the letter of the law, but it’s consistent with prior calls.

I call BULLSHIT on the no call on Johnson. Obviously they didn’t penalize themselves as much as they should have or they’d have waited until he was back in the pit stall before they tightened those lug nuts. Total BS.

“Why no penalty? Had Johnson stopped outside his box initially and work begun on the tires, the rule states they’d have to be re-secured before he backed up or serve a penalty. The reason NASCAR gave for not penalizing Johnson was one they’ve used in the same situation at other times this year: Johnson’s team penalized themselves.”

like other teams that have had issues didn’t penalize themselves throughout the year? come on na$crap. talk about favoritism!

they threw a pacifier to the 48 team cause johnson was not happy at all most of the weekend because of the performance of the car. i heard them talking about that during pre-race babble.

na$crap, you really think us fans are that stupid???

Who gets my Shout AT of the race? Kyle Busch does. Hey Kyle… pull that rolling wreck off the track and quit causing additional cautions. And yes, I realize it’s his crew chief’s call.

That 48 non penalty is a joke.
So NASCAR needs to go back and give Carl Long his life back along with his $200,000 for the miniscule engine violation at the All_Star race a few years back then based on the explanation of this ruling. The team even with the basically zero advantage engine still did not make the race and thus was penalized already due to not making any money for the effort.
Pitting outside the pit box is pitting outside the pit box, the penalty is written in black and white in the rulebook as well. NASCAR is so full of sh$t it is unreal. How dumb do they think we are. If the car was in the box no issue. The team is doing pitstop work in the pit area but outside the box. Their is no team “penalized themselves” in the rulebook so the officiating in NASCAR once again blows a very obvious call on a high profile team and they, the leadership, wonders why fans are leaving in droves? WOW. can one say incompetent leadership?
Wish the media would stop giving NASCAR such a pass on being this stupid/corrupt.

I have been a fan for decades but the past 5+ years have been apathetic for the most part. Still watch but am not “obsessed” with having to see the races on TV or being there like I used to be. Example: yesterday I was with my wife and out of town and did not even really check on how the race was going online as we sat in a café waiting for our son’s trombone summit concert to begin. Barely even gave it a thought.

Checked on the Packer/Cowboy game 4 times though.