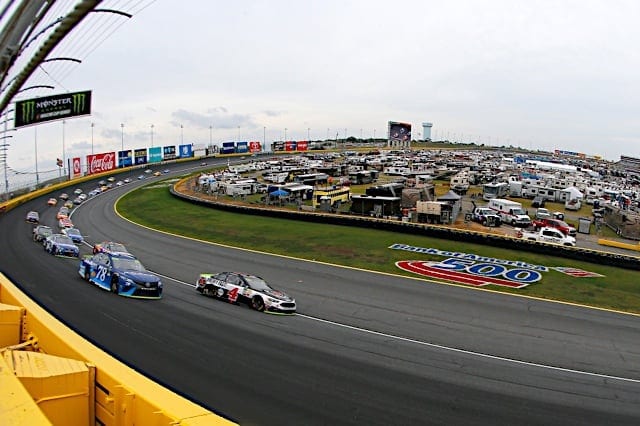 Heading into the Round of 12 for the Monster Energy NASCAR Cup Series playoffs, most of NASCAR’s storylines have been about everything but the on-track racing.  The sport got dragged into the national anthem protest controversy that has rocked the NFL in recent weeks.

An engaging silly season has revealed the unsettling amount of influence sponsors wield in a team’s driver selection.  Discussions about rules infractions and penalties casted a pall over the Round of 16 races.  Since it was no surprise to see Martin Truex Jr. and Kyle Busch roll to impressive wins in those events, NASCAR is no doubt hoping that the Round of 12 races can inject some excitement into the postseason.

Even the week leading up to all the festivities at Charlotte Motor Speedway has been more about the future that the current championship battle.  NASCAR released the 2018 MENCS rules package, revealing only minor changes for next year.

Hendrick Motorsports revealed the paint schemes its four drivers will use in the 2018 Daytona 500.  The livery on William Byron’s No. 24 car will no doubt invoke memories of Jeff Gordon’s past glories.  Yet the most surprising look was Jimmie Johnson’s mostly-black Chevy, a totally new look for Hendrick’s only remaining veteran racer.

Surreal to see this paint scheme with my name on it today. Thanks to everyone for putting this together pic.twitter.com/wITXRVsXQH

Perhaps the biggest 2018 news was the update on the CMS roval, which NASCAR will use for the first time next year.  The road course’s latest edition is a chicane on the frontstretch just before the start/finish line.  Brad Keselowski already tested the chicane to great effect in Friday’s practice, using the paved area to catch his sliding car.

It still seems odd that this week’s MENCS race was the final 500-mile contest at Charlotte for the foreseeable future.  Charlotte’s pair of races have been mainstays on the NASCAR circuit for over 50 years.  The track first extended its fall race to 500 miles in 1966.  While the Coca-Cola 600 has long been the more famous of the two races, both of Charlotte’s events stood the test of time as races that demanded the most of man and machine.

Yet recently, the track in the heart of NASCAR country has slipped off its pedestal a little bit.  The spread of 1.5-mile tracks during the 1990s caused Charlotte to lose some of its uniqueness.  Speedway Motorsports Inc. even reconfigured Atlanta Motor Speedway and designed Texas Motor Speedway to look like Charlotte.

Additionally, a resurfacing project in 2005 changed the approach to racing at Charlotte.  A dozen years later, NASCAR is still trying to figure out how to get cars off the bottom lane, hence the addition of PJ1 Trackbite for this year’s races.  Throw in the aerodynamic difficulties that have plagued all the intermediate tracks, and the racing at Charlotte has been rather lackluster over the last decade.  There has even been talk of moving the All-Star Race away from the Queen City.

Therefore, in 2018, Charlotte will do something different.

In the world of stock car racing, it would have been inconceivable to replace a 500-mile oval race with a road course event 50 years ago.  In fact, making the same exchange even 20 years ago probably would have raised a few eyebrows.  Yet road course races have provided some of the best action in NASCAR recently.

The days of two or three stock car racers taking the lion’s share of wins at the twisty tracks have faded into memory.  Running the roval next year will also please the fans who have lobbied for a road course race in the playoffs.  Yes, Charlotte’s roval layout is not a “true” road course, but it is still nice to see NASCAR diversify its schedule and consider how to put on a good show for the fans.

Whether or not the road course turns out to be a long term solution, good racing during the rest of this year’s playoffs will do a lot for NASCAR.  Fans have, understandably, been concerned about the financial state of the sport and many of its teams, concerns that Brian France addressed earlier in the week.

“Every sport has different cycles where it’s better than it was or less than it should be,” France said. “Whatever it is, that will work out. Our job is that if there is a way for us from a policy standpoint, as an example, getting the cost out of the system, that we are going to work, that’s where the charter agreements that we did a couple of years ago allow us to, get at those things.

France is correct that professional sports are cyclical, and open communication with the teams is always a plus.  The trouble is that NASCAR has been on a downward slide in terms of TV ratings and attendance over the past decade, and those trends show no sign of reversing, despite the myriad of changes that NASCAR has made in that time.  Perhaps NASCAR has slipped off its pedestal the same way that Charlotte Motor Speedway has.

There are legitimate reasons for fans to worry about the health of NASCAR.  Yet that does not mean that NASCAR, or Charlotte, is broken beyond repair.  The roval could still be a great thing for Charlotte, but we will have to wait until next year to see it in action.  As far as NASCAR in general goes, the rest of the playoffs will make the strongest statement about the revamped championship format and stage racing.  If the last six MENCS races of 2017 continue to result in low ratings, France and his associates will have to go back to the drawing board.