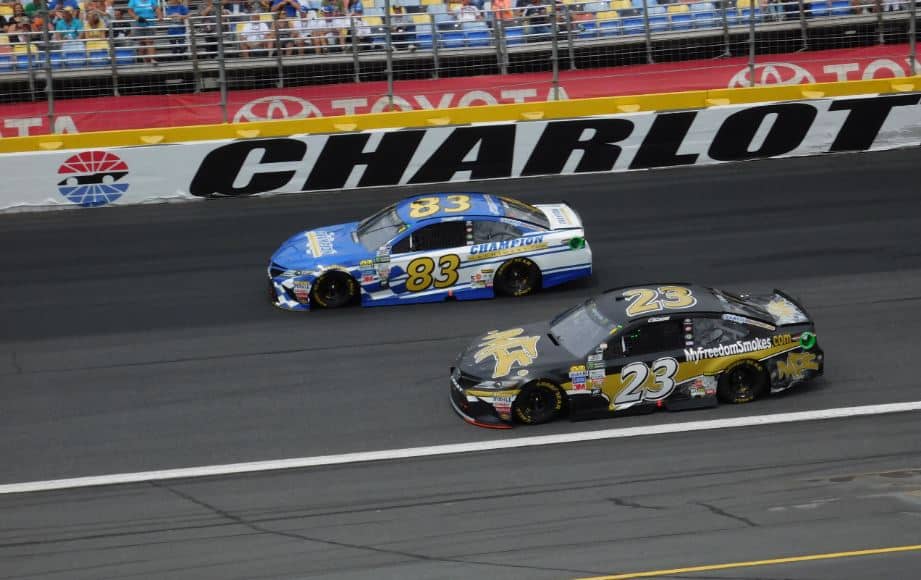 As the season draws to a close, not much has changed for NASCAR’s smaller teams.  While the No. 21 has, at least for the time being, earned its way off the list for 2018, most of the teams, if they survive the winter (and a couple are on shaky ground), will be in similar positions next year. In many cases, that’s a shame, because those teams have done everything right in their progression in the sport.  Go FAS Racing and Leavine Family Racing are the poster children for small team improvement this season, but there is only so far they can go.  LFR may bring in some more dollars with Kasey Kahne, and it needs to, because he hasn’t proven himself a better driver than Michael McDowell this year, which might elevate it a little. But to reach even mid-tier status would be a big jump since mid-tier teams are making the playoffs these days.

NASCAR is implementing more cost-cutting measures next year, but those are a drop in the bucket and won’t really close the gap.

Is there a way, then, for a team to break into NASCAR’s top level and grow?  Sure.  Furniture Row Racing did it.  The organization formed an alliance with Richard Childress Racing, improved, and formed a more lucrative one with Joe Gibbs Racing, earning its way to Toyota factor backing. Not only has FRR improved through its alliance, the team has exceeded the performance of JGR this year, and by all measures should win the title, and if they don’t, it really illustrates how bad the playoff system really is.  It took them over a decade to get there, but they’re not only competitive, they’re the sports most elite team.

But for every FRR success story, there are probably a dozen teams that will do everything right, everything they can do and still never be top-20 teams. To a degree it’s part of the game.  There will always be haves and have nots in NASCAR. But the question that NASCAR needs to be asking is whether the brick wall these teams hit when they improve as much as the money will allow is good for the sport in the long run.

Top of the Class: Charlotte

A handful of small teams had strong runs Sunday, including Ryan Blaney with an eighth-place finish for the Wood Brothers.  Talladega will be a test for Blaney, however, because despite the finish, he sits below the playoff cut line after Charlotte.

Also scoring top-20 finishes were JTG Daugherty Racing teammates Chris Buescher (18th) and AJ Allmendinger (20th), but solid result aside, the pair got into each other coming to the checkered flag and crashed. Needless to say, this week’s team meeting could be interesting.  Still, it’s a good showing for the pair, at least on paper.

Ty Dillon took home the 21st spot for Germain Racing after running in the top 20 for part of the afternoon before a flat tire got the best of him. Dillon was treated at the infield care center after the race due to heat exhaustion from his air conditioning not working properly, but was okay after some fluids.

Matt DiBenedetto had a stellar day for his Go FAS Racing team, finishing on the lead lap in 23rd, his best run since finishing eighth at Indianapolis.

Aric Almirola (24th) and Landon Cassill (25th) both overcame early handling issues to finish inside the top 25; Almirola’s team is capable of a little more, however, while 25th wasn’t a bad day for Cassill, whose team has struggled of late.

Throw Corey LaJoie (28th) and Jeffrey Earnhardt (30th) in this group also; both finished above where their teams have been running this season and Sunday was a good day for them. There were reports early in the weekend that LaJoie might not race Sunday after both BK Racing cars didn’t practice or make qualifying runs and teammate Brett Moffitt gave the reason as “bills were not paid.”

Reed Sorenson is a veteran driver and has shown himself capable of finishing a couple of spots better than his 31st-place run this week, even in underfunded equipment, so his weekend wasn’t what it could have been. BJ McLeod (32nd) and Timmy Hill (33rd), meanwhile, probably actually finished a few spots better than they should have due to the troubles of others, but they did what they needed to to capitalize, so that’s a plus.

Cole Whitt spent a while behind the wall with mechanical issues before finishing 34th, but he should get some credit for running quite well before the problem; he had a top-30 run going. McDowell spun after a rear-end failure; his team got him back on track for a 35th-place result.  McDowell is looking for a ride next year, but has had some very good results in 2017 and should be able to bounce back from this week’s performance.

The rest of this group includes Gray Gaulding, who was the last driver running at the end in 36th; David Ragan (37th), who was involved in a crash; and Moffitt, who was parked after violating a pit road rule with too many men over the wall while repairing damage from an on-track incident.

Finished 23rd today…good effort by my team! I got a little toasty in the car but I'm all good now after a quick IV ? pic.twitter.com/bnsFq45MGq

Hate we didn’t get the finish we deserved today but I think we got our mile and half program back in the right path. I’m doing fine too. ??

Had a blast today @skydivecarolina with @CopaCavanna
First class place and will do it again some day. pic.twitter.com/6mgYFLdIZP

I think next week will make/break us. I always thought it was fun for @TalladegaSuperS to be a playoff race, til now that we’re in them. ???

Delusional thinking if anyone thinks a small team without support from rich teams can be competitive.
As I mentioned to Ms. Grady, money has wrecked the sport and it’s on a downward spiral. Attendance down,
tv viewing down (last year was also down) nascar coming up with all kinds of gimmicks and none are working.
Millenionals are not going to spend 3 hrs. watching a race(?), aint going to happen.