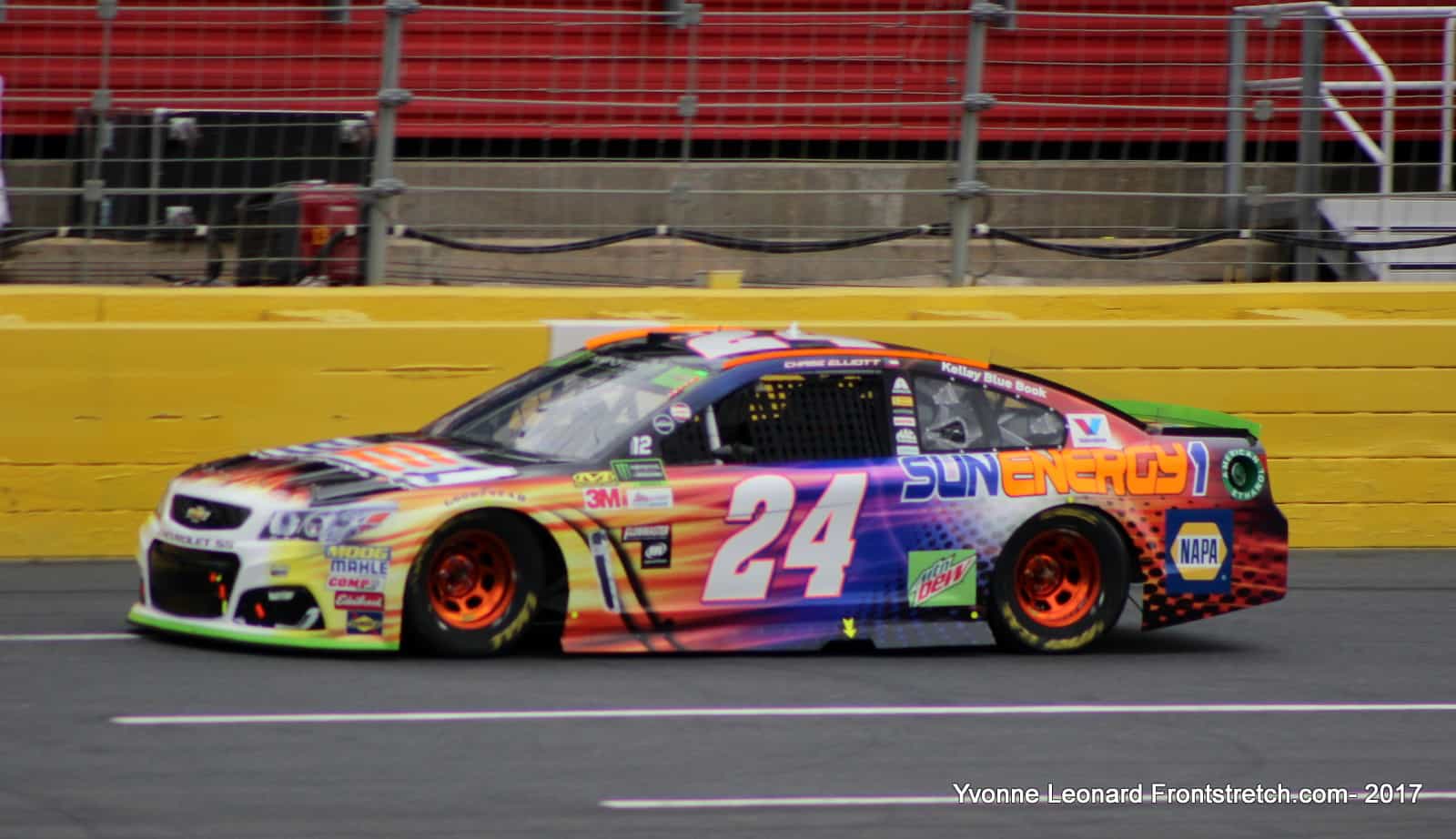 The rain may have stayed away from Charlotte Motor Speedway on Sunday afternoon, but Martin Truex Jr. couldn’t stay away from Victory Lane. Truex just reinforced the idea of what most in NASCAR already know: He is a virtual lock to be one of the Championship 4 in the final race at Homestead. That’s not to say there aren’t some other definite contenders, but if Truex isn’t running for the title on Nov. 19, it will truly be a shocker.

Truex racked up his sixth win of the season, but this one was impressive because it was accomplished in different fashion. Oftentimes, we’ve seen Truex win the pole and pull away during the first stage and completely dominate a race. But Sunday he started 17th, worked his way through the field and survived a number of restarts in the final laps to take the win. Even if he’s not your, you can’t help but feel good for him to get a win as long-time girlfriend Sherry Pollex prepares for another round of cancer treatment. At least they got to share another winning moment together on Sunday. Let’s hope they can share a winning moment together for Pollex’s off-track battle in the very near future too.

When a driver says it is time to hang it up, they usually know in their hearts that it is the right move to make. You can say Jeff Gordon or Tony Stewart may have been able to compete at high level for another year or two. But they knew they couldn’t put in the work to do what it takes to contend every week. So, when Dale Earnhardt Jr. announced earlier this year that this season would be his last, it wouldn’t have been odd to think he was making the decision a year or two prematurely.

But with just six races left in the season, it appears Junior made the right decision. He has just one top-five finish this season (fifth at Texas a few weeks before the announcement) and has rarely contended for a victory in 2017. It’s always nice to see the soon-to-be-retired drivers get a win in their final season, but for Earnhardt, it looks like his best chance will come Sunday at Talladega. It would certainly be poetic given the history he and his dad share there. But because it’s a playoff race, it’s not going to come easy, and he wouldn’t want it to anyway. No matter the outcome Sunday though, the results over the full course of the season show Junior did indeed make the right choice to hang it up after the finale at Homestead.

You might ask how can Chase Elliott be considered “cold” one week when he finishes second and then “hot” another week when he finishes second. Well, the previous race at Dover, he had the victory almost in hand, only to see it slip away. This Sunday at Charlotte, while he was contending, it’s not a race he ever really had a control of, so a second consecutive second-place finish puts Elliott in this place this week. He now holds six career runner-up finishes in less than two full seasons, and you know that win is coming very soon. Based on these last two races at two very different tracks, it wouldn’t be a surprise at all if Elliott sneaks into the Championship 4 if he continues to finish in the top five each week. And wouldn’t it be crazy if he won the final race of the season to take the title in his final race in the No. 24?

This week is a good news, bad news situation for Ricky Stenhouse Jr. His two victories this year have come on restrictor-plate tracks, and now that he is sitting 12th in the points (that’s the bad news), he does have Talladega coming up this week (that’s the good news). Stenhouse and the No. 17 team know that the pressure is on to not only perform well with a top five this week, but that it is in pretty much a must win situation. With that said, it’s a realistic option for this team at this track. Stenhouse has proven he can win on these big tracks now, and as usual, it will likely come down to who helps who at the end. But also remember that on the final lap, it will be every driver for themselves, doing whatever they can to get to the front, regardless of the team they are on or the type of car they drive. That may well not be a good situation for Stenhouse when everyone knows he realistically has to win or see his playoff run end.

I hear the boos for Kyle Busch during driver introductions, but you can’t help but respect his ability, tenacity and toughness when it comes to driving a race car. Busch was nowhere near a win on Sunday after an accident put him in the wall early on. In fact he was three laps down most of the day. But he kept soldiering on in a less than ideal situation to finish 29th. What we didn’t find out until after the race is due to the damage in the car, he was getting some extra engine fumes in the cockpit, making it even more difficult in the already muggy conditions that day. The fact the he finished kept him 12 points ahead of ninth-place Matt Kenseth, so now he has at least a little cushion heading into unpredictable Talladega on Sunday after what might one of the hardest earned 29th-place finishes you’ll ever see.

This may potentially be Danica Patrick‘s last season racing in NASCAR’s top series. While she has been great for the sport in terms of fan relations and showing young females that they can achieve their dreams, even if it’s to work in a field dominated by males, the on-track results continue to be a major issue for her. Patrick got caught behind a spinning David Ragan on Sunday and finished 38th. She now sits 28th in points, and the progress many were hoping for just hasn’t happened. In her 184 career races, she has just seven top-10 finishes. The bottom line is, even with all of the good fan relations, autograph signings and public relations, those kind of results can’t be ignored.

Since the next race is Talladega and you really can’t predict what is going to happen, this is a wild-card pick. While you have to think Stenhouse will be a contender, one driver who has also been good on plate tracks in recent years is another Ford guy, Brad Keselowski. He’s my pick to win it this week. The who you might not think about underdog sleeper pick of the week is Michael McDowell. He’s a frequent contender on plate tracks and a win by him would certainly make a great story as he is also is in search of a ride for next year.