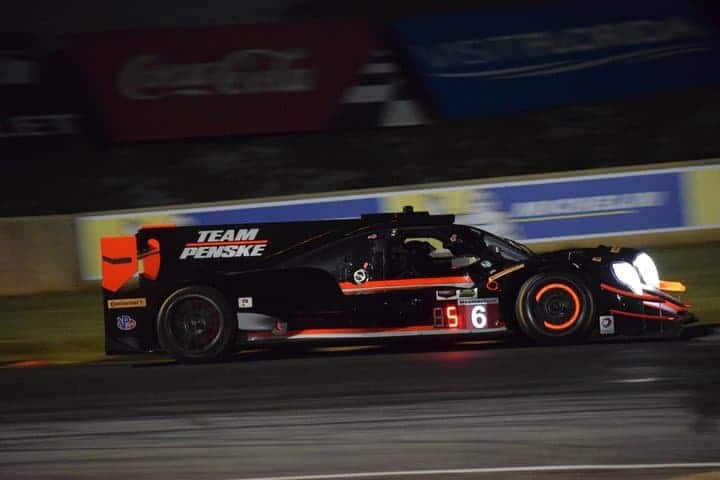 On Wednesday, Acura Team Penske officially announced the remainder of their lineup for the 2018 IMSA WeatherTech SportsCar Championship.  Joining Helio Castroneves in the second full-time Acura ARX-05 will be defending Prototype co-champion Ricky Taylor, who moves over from Wayne Taylor Racing.

For the endurance races, Graham Rahal and Simon Pagenaud (pictured above roasting his front brakes at Road Atlanta) will join for Daytona and Sebring at minimum.  Watkins Glen will likely see the two Acura ARX-05s run with their normal driver lineups.  Lineups for the 2018 Motul Petit Le Mans at Road Atlanta appear to be undecided at the moment.

Team owner Roger Penske is very happy to have Ricky Taylor in the fold.

“Adding a champion sports car driver in Ricky [Taylor] will help our team grow and develop,” Penske stated in an official press release.  “Ricky [Taylor] had a phenomenal season in 2017. He brings a great deal of sports car experience and his knowledge of the cars, the race tracks and the series overall will be a big benefit to our team. Having that experience, along with the winning pedigree of Helio [Castroneves], Juan [Pablo Montoya] and Dane [Cameron], provides a great platform as we launch the Acura Team Penske program next season. When you add Simon [Pagenaud] and Graham [Rahal] for the endurance races, I feel like we have a strong lineup for Daytona and Sebring.”

For Ricky Taylor, the opportunity will not be the first time that he’s spent time within the Penske organization.  Back in February, Taylor tested Pagenaud’s No. 1 Dallara DW12-Chevrolet at Homestead-Miami Speedway.  That test was considered a courtesy at the time from Chevrolet.  However, the latest opportunity is far from a simple courtesy.  Taylor’s ready to go.

“It was a great experience getting a chance to test an Indy car with Team Penske, but to get a call from Roger Penske offering the opportunity to drive one of his race cars full time –  well, that’s a life-changing opportunity,” Taylor stated.  “We have had a lot of success in the IMSA WeatherTech SportsCar Championship the last few seasons with my dad’s team, including winning both the Rolex 24 at Daytona and the Championship this year. I’m definitely ready for the next challenge in my career and I couldn’t be more excited to join Team Penske and work with Helio, Juan and Dane to launch the new factory Acura effort and start winning with the ARX-05 in 2018.”

For Rahal, he brings an existing relationship with Honda into the fold.  Rahal’s No. 15 Dallara DW12 for Rahal Letterman Lanigan Racing is Honda-powered.  This year, Rahal competed in the Rolex 24 at Daytona in the No. 93 Acura NSX GT3 for Michael Shank Racing with Curb-Agajanian.  The No. 93 was in the hunt until the last hour when damage and mechanical problems put them out.

Pagenaud brings a substantial sports car racing background to the table.  He has 10 career wins in the American Le Mans Series, including the 2010 Prototype championship for Highcroft Racing.  He also won the pole for the 2010 24 Hours of Le Mans and finished second overall in 2011 for Peugeot.

Acura Team Penske did not announce which full-time pairing that Pagenaud and Rahal would be supporting.  There will be no more driver announcements since Penske officials have previously stated that they are most comfortable with three-driver lineups for the longer endurance races.  Also, Ricky Taylor moving to Acura Team Penske leaves a big hole in Wayne Taylor Racing’s No. 10 Cadillac DPi-V.R. alongside Jordan Taylor for 2018.  No word as of yet as to who would replace Ricky Taylor there.