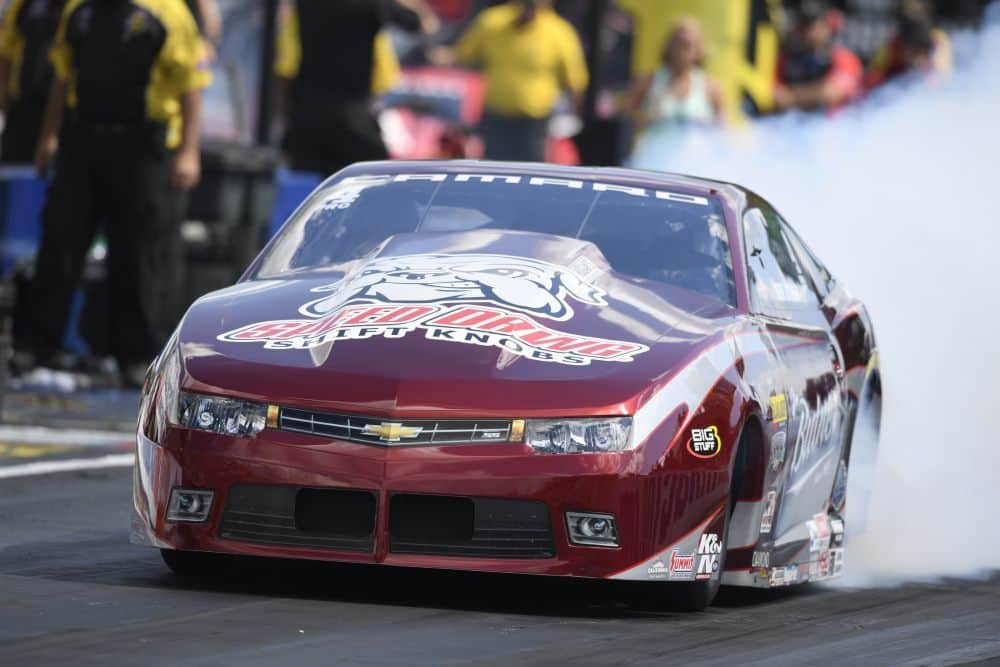 The NHRA has a way of dropping big news stories after I’ve already submitted my offering for the week, leaving me to have to talk about things a week out, but that’s exactly what we’re going to do because the announcement of the new Pro Stock qualifying procedures for 2018 bears some sort of mention and discussion. The main opinion is, namely: “Say what?”

The short fields in Pro Stock have been one of the most visible issues in the class. When only 13 or 14 cars show up to make the 16-car field, it looks bad. I’d heard the idea of cutting back the number of events where the class runs floated. It makes sense. It works for Pro Stock Motorcycle and Pro Mod, classes that always have more than 16 entries.

By running fewer events, it makes it more affordable for a team to do the full schedule. It also allows for more part-time teams at each event because the number they have to choose from is smaller. They essentially end up less scattered throughout the events.

This is not the way NHRA chose to go, however. Instead, Pro Stock will still run at all 24 Mello Yello Series events next year, but instead of a 16-car field, they will have an 8-car field at 9 select events, Houston, Topeka, Epping, Englishtown, Bristol, Denver, Sonoma, Seattle and Brainerd. The rest of the 24 events will feature the regular 16-car field.

It’s being promoted as a way to “increase excitement and fan interest.”

I have a different take. It feels much less like a way to generate interest and excitement, and much more like a way to hide the problem without solving anything. It feels like the NHRA looked at which events draw the shortest fields, cut the number of cars that make up a full field in order to hide the shortcoming of participants, and then tried to hide that fact under the dressing of making the event more competitive.

The reasoning is likely to keep at least three professional classes on the schedule at all 24 events. With Pro Stock Motorcycle and Pro Mod running partial schedules, there’s likely already a perception that some tickets carry more value than others. Should one of the events have only two professional classes remaining, it’s unlikely charging the same amount for a ticket as one that has three or more professional classes could be justified.

Cutting the number of events overall would have been a far better solution. Running a full schedule will remain just as difficult and financially draining and for a select few teams, it will just lead to more events where they won’t even qualify. It might even discourage some of the part-time teams from coming out altogether.

In other news, Alexis DeJoria announced her retirement from NHRA racing effective at the end of the 2017 season. She cited a desire to spend more time with family. She is one of a number of drivers to retire from NHRA competition in recent years for the same reason and it highlights a difference between NHRA and NASCAR. While NHRA racers are just as passionate about their sport, there is a different mindset as to where that sport fits into their lives for most.

When Carl Edwards suddenly retired from NASCAR before the 2017 season, shock would be the correct term for the reaction. What was he thinking? No one retires from NASCAR so young! Racing should be his whole life! Indeed, it is an odd thing for a top-flight Cup driver to decide he has other priorities in life. Not so for drag racers. It honestly happens all the time.

Part of the explanation, however, might be in the ability to return. Once a Cup driver walks away, returning to the sport and picking up where you left off just doesn’t seem to happen. The exit is mostly one way. Drag racing, even at the NHRA professional level, is different. Drivers step out for various reasons—financial, sponsorship, family—and sometimes they step back in too.

Jeg Coughlin, Jr. retired and came back. Morgan Lucas stepped away to spend time with his growing family. Tommy Johnson, Jr. was sidelined by lack of sponsorship until a few years ago. Angelle Sampey stepped away for family reasons and eventually returned. Ashley Force Hood stepped out of the seat to start a family but still has her competition license should she need to fill in for a team driver.

It’s always been a downside for women in NASCAR that once they start a family, it’s likely the end of their driving career because returning would be exceedingly difficult. It’s nice to see that women in NHRA racing, and men, for example, can make family a priority.

It’s an off week so let’s learn a bit. First off, always a favorite subject of mine, the NHRA Safety Safari. These men and women do a fantastic job keeping everyone safe and it’s always great to get an inside look at a little bit of what they do.

While we’re getting an education, we’ll let Jamie Howe continue enlightening us with some information about how a Funny Car rear end works.

Ah technology. I’d rather go to a small tire no prep race than an NHRA event. NHRA is just for rich old men now. Their little playground