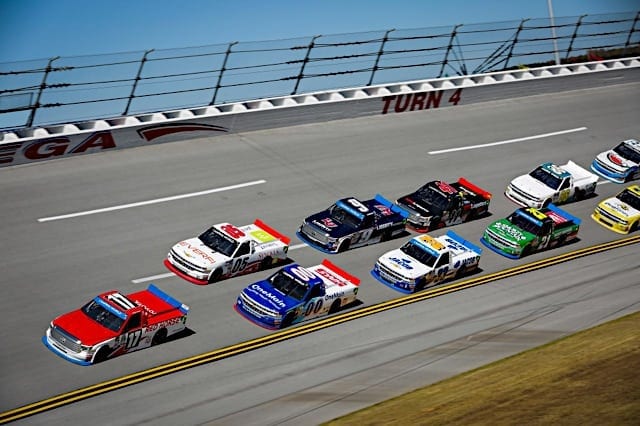 This weekend, the Camping World Truck Series heads to Talladega Superspeedway to close out the Round of 8 in its playoffs ahead of championship weekend at Homestead-Miami Speedway next month. With Christopher Bell and Ben Rhodes standing as the only two drivers guaranteed a spot in the Round of 6, the remaining six drivers look to capitalize on the uncertainty that surrounds restrictor plate racing to keep their championship hopes alive.

I’d like to say there’s a safe place for a driver to be in Saturday afternoon’s race, however Matt Crafton, who sits third in points behind Bell and Rhodes, only holds a slim 27-point advantage over Kaz Grala, who currently finds himself in seventh and eight points below the cutoff line. An early wreck for the No. 88 team – or any team, for that matter – would end its championship hopes before the series even makes it to the Championship 4.

With that said, you have to look to Johnny Sauter and the No. 21 team as one of those that will make it through to the next round. After all, it’s hard to imagine that a driver who ended up with crash damage in the first two races of the playoffs and still managed to pull out top-10 finishes would be knocked out this weekend. Granted, Talladega is a different beast altogether, though Sauter has had a relatively good streak at the superspeedway. He has four top fives in the last five races at the track, and the 31st-place finish came following an engine failure in 2014.

The difficult thing about playoff racing at Talladega, especially as a cutoff race, is that you’re likely to have 26 drivers running on eggshells, hoping they won’t be the cause of a wreck that ultimately ends the championship hopes of one of the other six still vying for a spot.

But before we get to the craziness and uncertainty that is setting the Round of 6 at Talladega, let’s take a look back at some of the most memorable Truck Series moments at the 2.66-mile track.

In a one-off race for Kevin Harvick, Inc., Mike Wallace stepped into the No. 33 Chevrolet and paired up with teammate Ron Hornaday Jr. shortly after the green flag flew. In the days of tandem drafting at superspeedways, the pair was unstoppable when hooked up, and Hornaday never abandoned the plan to continue pushing Wallace. The duo led a combined 55 laps (54 for Wallace and one for Hornaday) en route to Wallace’s trip to Victory Lane, besting the pairing of James Buescher and Ricky Carmichael.

You know those wrecks where you’re sitting there, holding your breath, hoping all drivers involved are able to walk away? Yeah….

As the field paired up in twos and headed toward the start/finish line for the final time, chaos erupted coming out of Turn 4. Miguel Paludo gave Jeb Burton a shove that was just a little too much, and he spun up the track into Kyle Busch. The ensuing carnage saw Paludo flip and slide on his roof for an extended period of time, getting hit by multiple trucks before becoming upright once again, his truck on fire. Meanwhile, Busch took two hard licks, including one on a non-SAFER wall on the inside of the track. Darrell Wallace, Jr. called the hit the “hardest hit of my career. It scared the hell out of me.”  Johnny Sauter emerged victorious, and the most serious injury to come out of the wreck was a broken thumb for Justin Lofton.

It’s another one of those cringe-worthy crashes where a truck goes out of control while the field races on. Ben Kennedy got some help going around in the form of a tap from Joe Nemechek, and the ensuing crash was one that left you waiting for the driver to say he was alright on the radio. Kennedy hit the outside SAFER barrier not once, but twice, leaving a trail of parts and pieces from the No. 31 Chevrolet all along the track. Kennedy was put out of the race on the spot; Timothy Peters went on to take the victory that day.

There is nothing more exciting than a first career win for any driver, even if it does come under caution. That pure, raw emotion that exudes from the victor is infectious, and it was no different when Parker Kligerman scored his first career Truck Series victory in the 2012 Fred’s 250. In a season that saw him released from Brad Keselowski Racing to make room for Ryan Blaney, Kligerman never skipped a beat and landed at Red Horse Racing to finish out the season. He became the record eighth first-time winner during the 2012 season.

In the spirit of first career wins, last season, it was Grant Enfinger who ran a part-time schedule for GMS Racing but managed to find Victory Lane for the first time. Though the field grouped up and charged behind him, the driver of the No. 24 Chevrolet held off the snarling pack and finished first ahead of then-teammate Spencer Gallagher. This year, he’s moved on to ThorSport Racing for the full season but has yet to win a race. Though he didn’t make it into the championship battle this season, Enfinger has continued to show that he has the ability to make the aggressive moves that will ultimately be necessary for him to find Victory Lane once again.